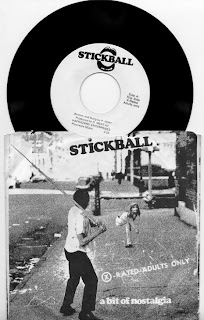 Finally, courtesy of Richard Metzger from DangerousMinds.net, here is the classic song "Stickball" by P-Vert, aka Tony Bruno. In a word, bitching!

To find the original URL for this masterpiece:

And here is the official story behind Stickball, from Richard:

Stickball is an improbably strange—and very NSFW—adult novelty record from the early ‘70s, apparently the work of singer Tony Bruno working under the pseudonym P.Vert. I found my copy at Downstairs Records in New York (it was actually upstairs) in the mid-80s and I still have my copy. It’s a 45rpm backed with another song—a disco number—called Fuck Me Forever by Connie Lingus, Wouldn’t you buy that? Well I did.

About a week later I was in the same store with my old friend Nate Cimino and he scored a copy as well. Nate at that time worked part time behind the counter of the legendary New York record store Bleecker Bob’s, which was owned by the notorious Bob Plotnik, a man who was not afraid to tell you what he thought of you, let’s just say. A cantankerous fellow.

One day I went into the shop and Bleecker Bob was there. He said “Metzger, you’re so fuckin’ smug, you think you know everything, but you don’t know SHIT. I am the mogul of moguls. Name me any record title and I will tell you the artist, name me any artist and I will tell you at least one of their song titles.

Nate and I looked at each other, each knowing what the other was thinking: “Stickball.” It was the most obscure thing I could think of, sure to stop him in his tracks.

Bleecker Bob laughed his loudmouthed Brooklyn wiseguy laugh. “YOU FUCKIN’ ASSHOLE!! I PRODUCED FUCKIN’ P.VERT! YOU TRIED TO STUMP ME BY NAMING MY OWN FUCKIN’ RECORD! HAHAHAHAHAHA….”

And indeed I had. He pulled a copy right off the shelf and proved it.

True story.
*
Here is a URL to an earlier version of this story, on The Konformist Blog:

And here is the original version of this story via an exchange between Metzger & I on DangerousMinds.net, on a page dealing with the notorious Rolling Stones doc Cocksucker Blues:

[It starts out sounding like church. There is organ music and sort of priestly muttering which ends in "Bless me father for I have sinned. Ah-men".]

I would dig to really to be able to go back to the things when I was just a little kid. And I'd like to return to all the things like stickball and basketball and playing in the streets... (Bruno... Tony come out and play?)

You know. You met a little girl and she was your love, you know? And it was so out of sight and you kind of ran down the street together. I mean, I mean love, love it was LOVE, it was a gas. It was sharing popcorn and grooving with ice cream.

And love, love between two people, man it is out of sight. But, let me say this: Love between FIVE people, now that's heavy. Now that could be a groove especially if one of those people is me! Dig it?

Because you should get together, everybody. Get in your bed. You grab her tits. You kiss her on the back of her fucking neck and you say: "Suck! Suck! Suck! 'Cause the world is built on sucking." You take to pencils, stick them in her ears and say: Eat me baby! Eat me baby! 'Cause the Lord say's...let me hear from you brother Billy... Good God Almighty!

[Someone belches] Don't you excuse yourself, you fuck?

Now let me say this: With your left hand unbuckle your pants. Let your pants drop to the floor. Then take your young lady by the head. Lay her floor and say, 'Whip some SKULL on me, bitch!!!' Because you know, you know, you know I am the Lord and the Lord will praise thee.
Posted by Robalini at Saturday, April 24, 2010

I have know Idear who Bleecker Bob
is. But I love your story about
my record and thanks for posting It T.B.