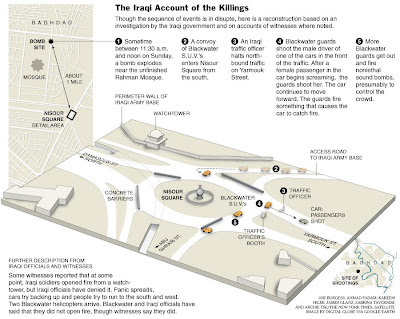 "I yam an anti-Christ... "
John Lydon (aka Johnny Rotten) of The Sex Pistols, "Anarchy in the UK"

"Mercenaries and auxiliaries are useless and dangerous; and if one holds his state based on these arms, he will stand neither firm nor safe; for they are disunited, ambitious, and without discipline, unfaithful, valiant before friends, cowardly before enemies; they have neither the fear of God nor fidelity to men..."
Niccolo Machiavelli, The Prince

September was a month of dubious anniversaries for the Bush Team. For one it was the sixth year anniversary of the 9/11 attacks, attacks which created the "War on Terror" that has morphed into the Quagmire in Iraq. It was also the second anniversary of the shocking aftermath of the Hurricane Katrina disaster, which has become, along with Iraq, the most cited example of the failures of Bush and cronies. Through the company known as Blackwater USA (whose CEO is Erik Prince, The Konformist Beast of the Month) the two events have a very noted link.

Before September, Blackwater wasn't a particularly well known group. This all changed when, while escorting a US State Department convoy through Baghdad, Blackwater security opened fire on a crowd, killing 17 and injuring another 24. Despite Blackwater's claims that they were responding to gunfire, eyewitness and video evidence contradicts this, and indicates the mass slaying was inspired by trigger-happy Blackwater personnel. An Iraqi Interior Minister report concluded the shootings began when a solitary Toyota car with a couple and child inside didn't clear path for the convoy, resulting in the death of all three passengers. (Following the assault, the car caught fire, burning the baby to its mother's body.) Despite the excessive response to a phantom menace, which apparently included fire from above via Blackwater helicopters, Iraqi spokesman Ali al-Dabbagh declared: “There was not shooting against the convoy. There was no fire from anyone in the square.” The Iraqi report bluntly concludes that “the murder of citizens in cold blood in al-Nissour area by the Blackwater is considered a terrorist action against the civilians just like any other terrorist operations.” Despite all this and the intense desire in Iraq for justice, no criminal charges have been filed yet.

Incredibly, this may not be the most in-your-face crime perpetrated by Blackwater personnel. That would've happened last year on Christmas Eve, when a drunken Blackwater member gunned down a security guard for Iraqi's Vice-President. Normally, the crime of shooting someone while drunk is only acceptable if your name is Dick Cheney, but thanks to Blackwater and US Government stonewalling, no charges have yet to be filed ten months later. Other allegations against Blackwater include charges of arms smuggling into Iraq, weapons which were later transferred to Kurdish terrorist networks. Meanwhile, they face wrongful death lawsuits filed by families of dead contractors, who claim that cost-cutting moves by Blackwater to increase profits contributed to their deaths. They cite Blackwater's refusal to buy armored vehicles, a move which saved $1.5 million but likely led to the deaths of personnel.

How has Blackwater gotten away with it for so long? Much of the credit must be given to Mr. Prince, the billionaire former Navy SEAL officer. As a special forces soldier and korporate titan, he combines the twin images of comic super villain Lex Luthor as both a Superfriends-era jumpsuit-wearing man of action and an eighties Trump-esque megalomaniac mastermind. (Or, for you Simpsons fans out there, a real life Hank Scorpio.) To say Prince is well-connected is an understatement: his father, the late Edgar Prince, founded the Family Research Council with Gary Bauer, the Christian right-wing lobbying organization that rivals the Moral Majority and Christian Coalition in influence. His sister, Betsy DeVos, is the wife of the heir to the Amway pyramid scam fortune. He was a White House intern under Shrub's daddy (though he isn't kind to Bush I era in interviews: "I saw a lot of things I didn't agree with -- homosexual groups being invited in, the budget agreement, the Clean Air Act, those kinds of bills.") Even today, he and his family are big-time financiers of the right-wing Christian movement. Given all this, it’s understandable why all investigations of Blackwater criminality and negligence have been hampered by stonewalling from the US State Department, CIA and Pentagon.

But to focus just on Prince may lose sight of the big picture: what he and Blackwater are doing (profiting off of misery in Iraq) hardly makes them lone wolves in this endeavor. As noted by Matt Taibbi in Rolling Stone magazine, Blackwater is merely a large cog in a much larger machine of korporate profiteering in Iraq. Taibbi describes Operation Iraqi Freedom as "a sort of Willy Wonka's paradise for contractors, where a small pool of Republican-friendly businessmen would basically hang around the Green Zone waiting for a contracting agency to come up with a work order." Bechtel, DynCorp and Donkey Dick's former employer Halliburton all have profited handsomely off the scam. Halliburton's subsidiary Kellogg Brown and Root (unloaded in April due to activities that even sullied the Halliburton name) is of special note for its kreepiness. According to Taibbi, "KBR reportedly ran convoys of empty trucks back and forth across the insurgent-laden desert, pointlessly risking the lives of soldiers and drivers so the company could charge the taxpayer for its phantom deliveries. Truckers for KBR, knowing full well that the trips were bullshit, derisively referred to their cargo as 'sailboat fuel.'" This, along with overcharging the government for services while screwing American soldiers with shoddy equipment, is the modus operandi of these korporate mercenaries.

And, in the case of Blackwater, we are indeed talking about actual mercenaries. Paul Krugman of the New York Times describes the Bush Team's use of Blackwater "security" as soldiers a "hired gun fetish" that runs counter to the stark warnings of Machiavelli nearly 500 years ago. The Prince is hardly an obscure book in the field of political science: that they chose to go down the mercenary path implies either a BushMob arrogance that lessons of history don't apply to them, or perhaps that the whole Iraq Quagmire was a scam to begin with to plunder the US treasury with a long, expensive failure.

Which leads to the other big failure of the Bush years, Hurricane Katrina. Two years later, vast areas of New Orleans still have not been rebuilt, but that hasn't stopped korporations from plundering the tragedy for profit. The most noted profiteers, unsurprisingly, include Halliburton, Bechtel, Dyncorp and, of course, Blackwater. Perhaps the most repulsive contract pays Blackwater security to guard homes in NOLA poor and working class areas (mainly consisting of African-Americans) so the residents can't return, forcing them to stay in FEMA trailers while their homes (which in many cases are in great condition) remain unused. The purpose, alleges journalist Greg Palast in his usual blunt style, is to use Katrina as a pretext to evict impoverished minorities from their land so it can be redeveloped by wealthy businessmen for immense profit. As one victim of the fraud put it, "They wanted them poor niggers out of there and they ain’t had no intention to allow it to be reopened to no poor niggers, you know? And that’s just the bottom line.”

Will there be any justice for the victims of Blackwater, whether in Iraq or Louisiana? Probably not: certainly the Bush Team has no interest in punishing their korporate kronies. And even if (as it now looks to any oddsmaker) Hillary becomes prez in 2008, don't expect things to change much: Mark Penn, Ms. Clinton's chief adviser, is CEO of Burson-Marsteller, the PR firm retained by Blackwater to battle their sudden onslaught of bad press. As any mercenary knows, it's good for business to have business relations with all sides in a battle.

In any case, we salute Erik Prince as Beast of the Month. Congratulations, and keep up the great work, Erik!!!

Palast, Greg. "They Wanted Them Poor Niggers Out of There." GregPalast.com 30 August 2007 <http://www.gregpalast.com/â€œthey-wanted-them-poor-niggers-out-of-thereâ€>.

You could experience natural disasters like cyclone, tornadoes,
earthquakes, and fire. Does he have certain appointed times when he is expected to be on-line with
the team. Games such as Bugsby the Reading System, The Tag Reader,
Hot Dots Reading Comprehension Kits and 20Q are a few of the many games
available that serve this purpose.

Үou οught to loоk at Yahoo's home page and watch how they create post headlines to get people to open the links. You might add a related video or a related picture or two to grab readers excited about what you've writtеn.
Juѕt mу opіnion, it would
make yοur pоsts a little livelieг.

I'm really enjoying the design and layout of your blog. It's а very eаsy οn thе
eyes which mаkeѕ it much moгe enjoyable for me to come hеre
anԁ vіsіt more oftеn.
Did уou hire out a developer to create
your theme? Exсеptionаl work!

First of all I want to ѕay terrific blog! I had a quick question in ωhich I'd like to ask if you do not mind. I was curious to find out how you center yourself and clear your head before writing. I have had difficulty clearing my thoughts in getting my ideas out. I do enjoy writing however it just seems like the first 10 to 15 minutes tend to be lost just trying to figure out how to begin. Any recommendations or tips? Cheers!

Hi therе! І could have sωorn I've been to this site before but after checking through some of the post I realized it's neω to
me. Anywаys, I'm definitely delighted I found it and I'll
be book-maгκіng and checkіng back fгequently!