The Best Christmas Gift Ever 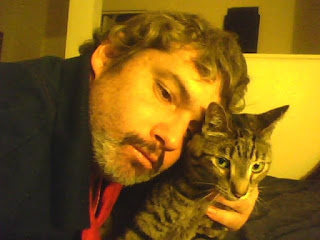 On the morning after Christmas, my male cat Blueboy snuck outside while I was bringing in groceries.  He's an indoor cat, but I let him play outside a little for exercise and fresh air while I am nearby.  He didn't realize I wasn't there, and appears to have been confused where our apartment is.  I was so heartbroken that I became extremely depressed, and little Fluffer was very sad as well about the disappearance of her boyfriend.  For the first few days, I left food out for him in hopes of getting him back, and I believe I did see him once.  Then on January 1st and 2nd, I decided to take more extreme measures and camped out with tuna for him outside in hopes to get him back.  The good news is on January 2nd, the eighth day, he was found by neighbors & security and I was able to get him home.

Fortunately, it wasn't too cold this Xmas season, and my apartment is a gated complex and a large compound, so he had places to stay.  (Cats rarely travel more than 300 feet from their home base.)  I have bought a collar with a bell so I can hear him when he tries to sneak out again.  All I can say is the return of Blueboy is far and away the best Christmas gift I have received in my life.

Above is a photo of Blueboy I took, after he came out from hiding and sleeping for 20 hours.  He doesn't look too happy in the photo, but that's because I had to hold him in place for the photo.  He is actually very happy.  But happy or not, I wanted to show you his face, so you can see the face of the son I have fallen in love with. 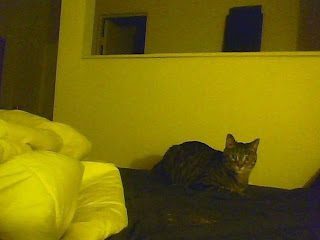 Glad you got him back!