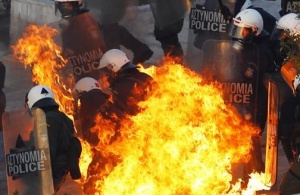 ATHENS (Reuters) - The Greek parliament approved a deeply unpopular austerity bill to secure a second EU/IMF bailout and avoid national bankruptcy, as buildings burned across central Athens and violence spread around the country.

State television reported the violence spread to the tourist islands of Corfu and Crete, the northern city of Thessaloniki and towns in central Greece. Shops were looted in the capital where police said 34 buildings were ablaze.

Prime Minister Lucas Papademos denounced the worst breakdown of order since 2008 when violence gripped Greece for weeks after police shot a 15-year-old schoolboy.

"Vandalism, violence and destruction have no place in a democratic country and won't be tolerated," he told parliament as it prepared to vote on the new 130 billion euro bailout to save Greece from a chaotic bankruptcy.

Papademos told lawmakers shortly before they voted that they would be gravely mistaken if they rejected the package that demands deep pay, pension and job cuts, as this would threaten Greece's place in the European mainstream.

"It would be a huge historical injustice if the country from which European culture sprang ... reached bankruptcy and was led, due to one more mistake, to national isolation and national despair," he said.

The chaos outside parliament showed how tough it will be to implement the measures. A Reuters photographer saw buildings in Athens engulfed in flames and huge plumes of smoke rose in the night sky.

"We are facing destruction. Our country, our home, has become ripe for burning, the centre of Athens is in flames. We cannot allow populism to burn our country down," conservative lawmaker Costis Hatzidakis told parliament.

The air in Syntagma Square outside parliament was thick with tear gas as riot police fought running battles with youths who smashed marble balustrades and hurled stones and petrol bombs.

Terrified Greeks and tourists fled the rock-strewn streets and the clouds of stinging gas, cramming into hotel lobbies for shelter as lines of riot police.
Posted by Robalini at Wednesday, February 29, 2012

Email ThisBlogThis!Share to TwitterShare to FacebookShare to Pinterest
Labels: Greece