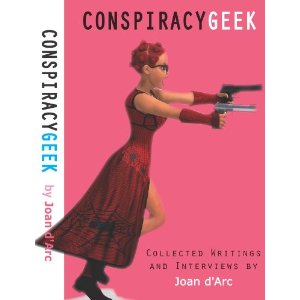 Joan d'Arc, co-founder in 1992 of Paranoia Magazine and editor of HunterGatheress Journal, now Chief Resident of the Paranoid Women Institute, compiles her best writings and interviews in this collection. A new race of disembodied cyborgs is being engineered to travel into deep space. The night Wilhelm Reich s Cloudbuster became a Spacegun. Proof that the U.S. knew Japan was going to bomb Pearl Harbor and let it happen. A new mafia-connected JFK witness steps forward. Giordano Bruno, the first Catholic priest Ufologist from the 16th Century, burned at the stake for his universalist ideas. Evidence of Robot Probes in our own solar system and what that means to humanity. Beings in NothingDrive: An Existential Analysis of the Travis Walton UFO Abduction. A chronology of anomalous radio signals: Have messages from space been misconstrued or covered up? Why alternatives to Darwinian Evolution should be taught in public schools. This cutting-edge 356-page book contains 13 articles and 12 interviews. Interviewees include: Joan Mellen on the Cast of Characters in the JFK assassination; Michael Cremo on how museums and textbooks hide evidence of extreme human antiquity; Barbara Walker on how God demoted Goddess and replaced the Womb with the "Word"; David Ray Griffin on 9/11 and Osama bin Laden; Jarrah White and Ralph Rene on the Apollo Moon Hoax; Stephanie Caruana on the Gemstone File JFK Thesis; Acharya S. on the mythological attributes Jesus shares with other solar gods; Craig Heimbichner on Freemasonry and Aleister Crowley's OTO; Beth Goobie on surviving a Canadian MKULTRA cult from birth; Spy Robert Eringer on how he brought in Ira Einhorn for the murder of Holly Maddux; Mike Bara on evidence of remains of ancient cities on the Moon.