The Road from Ruin: California 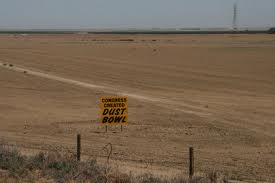 Slaloming  the Malibu through cavalcades of tumbleweed and dust mixed with the flower petals of Almond trees, I jettisoned myself further away from Barstow. 5 was even bleaker.  The northward travail punctuated with signs that read: Congress Created This Dust Bowl with Pelosi’s, Costas’s and Boxer’s names crossed out. NAFTA uber alles. Thought of all the produce I had eaten in my life that was grown in this region. No more.

A bit of rain and fifty degrees gave me relief from the desert harshness I had escaped but the gas station I had stopped at seemed but an odd oasis of sorts. Not meant to be there although the 4.70 per gal. prices said otherwise.  I leave and a giant tumbleweed careens into my grill, shatters and vaporizes before the north wind sweeps it away instantly.

Road fatigue didn’t set in until I passed through Bakersfield and managed to bail out on a much welcomed side road, working my way through some verdant, mountainous terrain. A tenuous sense of peace pervaded, like being on the cusp of something unique, if not extraordinary.  Yet this too was co-opted territory. By what I couldn’t tell.

Met my host in a small town at a Safeway, after passing by a lake rendered idyllic by twilight. I followed her through the dark and serpentine roads for well over an hour until we reached a depressed town on the edge of an Indian reservation.
Definite meth stronghold here I felt.The dark didn’t really add anything to the gloom, but I was glad when we reached the gate of her property and made it to the top of Spirit Mountain. Greeted by a 140 lb. German Shepherd and a sophisticated Doberman who was a bit demure at first, it was nice to get out of the car.

A pleasant alpine expanse greeted me the next morning, home to Black Bears and Mountain Lions. The terrain seemed content somehow, assuaged by clouds and fog. A bit of climactic respite, although the feeling of something looming prevailed.

Too many high eyes in these parts for a teetotaler such as myself. Stoned is more than just a way of life, rather a blight that makes people content with their own mediocrity. In a trailer, I was forced to listen to this doped up woman patronize a carpenter 30 plus years older than her. She claimed she could see his glowing soul through his skin but I could see otherwise-her cosmically sourced, ulterior motives were quite transparent to me.  I got up and left without excusing myself and apparently that offended her from what I heard the next day. Nothing that the acupuncture she learned to do couldn’t cure. The scene left me wishing for some needles stuck in my own meridians -primarily in hopes that they would  alleviate the lingering disgust I had-for the carpenter-who was more than mesmerized by her uplift rap.

Time to sign off folks. My green tea is getting cold here in this coffee shop. I’ve got to tough it out at least until the fall.  Funny what having no money forces a person to do-just never thought it would be like this-the desperation that is.