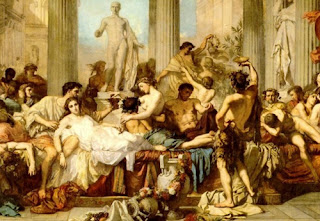 The following is an excerpt from the new Disinformation title 50 Things You're Not Supposed To Know: Religion, authored by Daniele Bolelli.

Carpo … who? The lead character in our story was the leader of a second century Christian community based in the Greek islands. Back in those days, early Christians couldn’t agree on just about anything. Official Christian doctrine hadn’t been fully established yet, so an extremely wide range of opinions and teachings fell under the label of “Christianity.” The only thing they had in common was that they all thought Jesus was a cool guy. Other than that, everything else was up for debate since they couldn’t even agree on which books should become official scriptures. Some Christians believed their religion was to remain exclusively for Jewish people. Others wanted to open it to all ethnicities. Some believed Jesus and God were one. Others were far from sold about this. Some were strict ascetics. Others enjoyed a very sensual life. Some promoted women as leaders within their groups. Others felt women were good to cook dinner and make babies, but religious leaders? Ha!

In the midst of this very chaotic beginning, Carpocrates emerged as a particularly charismatic preacher, who soon attracted enough of a following as to give birth to his own branch of Christianity. His ideas were just a tad on the wild side. Jesus—Carpocrates argued—was as human as anyone else. He was a visionary whose brilliance and wisdom put him in touch with God, but was not God himself. This didn’t diminish Jesus’s status in Carpocrates’s eyes, since it set him up as a model of behavior that regular human beings could hope to emulate. The whole story of the virgin birth made Carpocrates laugh. In his view, good old Jesus was conceived in the old fashioned way: through sweaty sex. The depth of Jesus’s wisdom was enough for Carpocrates to admire and love him, so he felt no need for any supernatural special effects.

Since this beginning was apparently not controversial enough, Carpocrates promptly taught his followers to reject Mosaic Law as well as the prevailing morality of his times as mere human opinions, not divine commandments. A goodie-goodie morality was according to Carpocrates nothing but a cage built by those who were too scared by life’s intensity. The soul could only achieve freedom and fulfillment by experiencing all of life, without discriminating too much. Only in this way, it would free itself from the cycle of reincarnation …

Oh, yeah, did I forget to mention that? Carpocrates’s followers—like the members of many other early Christian sects—fully believed in reincarnation. And just like several tantric schools found in the history of both Hinduism and Buddhism, they also believed that human beings should explore every emotion without holding back. Sensual pleasure in their eyes was not any less sacred than the most spiritual practices, so good food, sex and every other earthly joy was embraced as a stepping stone toward liberation.

This determination to live life to the fullest went hand in hand with another radical notion. Carp considered differences in wealth and social class as unnatural perversions. Since everyone is born naked and equal in front of God, human attempts to gain status at the expense of others were misguided and ultimately against God’s plan. The cure for the very human tendency toward ego aggrandizing was to discourage the evil of private property. Instead, everything—from material possessions to sexual partners—was to be held in common. Coupled with Carp’s insistence on indulging in sensual pleasures, this idea led his followers to regularly stage sexual orgies as part of their spiritual practices … which makes you wonder: just how different would the world be had mainstream forms of Christianity decided to embrace Carpocrates rather than stern moralists like Saint Paul and Saint Augustine? I think it’s a safe bet that church attendance would be much higher.