I ADOPTED A DOG IN ITS FINAL HOURS 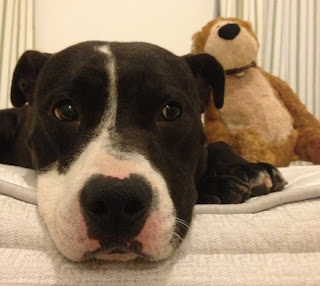 I ADOPTED A DOG IN ITS FINAL HOURS ON "DEATH ROW," AND IT MIGHT BE THE BEST DECISION I'VE EVER MADE
When I decided to get a pup for my new pet-friendly apartment, little did I know I would be racing against the clock to save a sick doggie's life.
Mandy
Dec 3, 2012
http://www.xojane.com/relationships/i-adopted-a-dog-from-death-row

On Friday, I went to Jill Zarin's birthday party with my friend Sam Lansky, who had an in-depth conversation with me about what kind of animal I would get for my new apartment.

"Just be careful," he said. "Sometimes if you get a cat, you end up living alone forever."

"Really?" he said. "Name one woman or gay who adopted a cat, and then ended up meeting a man after."

"Exactly," he said. "If you get a cat, something happens where it becomes a self-fulfilling prophecy. That's just science."

I went home that night, and I thought of a friend who did in fact meet a great guy who has a cat, texted Sam to nah-nah-nah his "science" theory and then opened up my monthly budget. I've been saying I wanted a dog forever. When I was a kid, around 8, I actually had a scheme where I was going to dig up the carpet in my room, replace it with dirt and then surreptitiously adopt a dog without telling my parents. I never had the courage to do this, although I did have a habit of using my paper-route money to continually purchase cats and bring them home through my bedroom window. My parents let me keep them, until it reached the point of ridiculousness after Cat No. 4.

Now that I'm an adult, I realized that I could make my 8-year-old dreams come true. All I said when I was living in San Diego was how I couldn't wait to get a dog, as I slept with my father's guide dog almost every night. So I went through my monthly take-home-pay and figured out the cost of doggie day care, food, vet expenses and more, and while I can't exactly be a clotheshorse or be springing for $100-meals out as a dog owner, I realized that it was absolutely feasible. I was going to do it.

I posted on my Twitter and Facebook at 11 p.m., "I've come to an important decision. I'm going to adopt a dog. Now to figure out which kind." The suggestions came flooding in, but then my friend Dennis Burger added to the thread: "Mandy, if this is a move you're making soon -- like, now -- please consider this guy. He's going to be destroyed tomorrow if no one adopts him."

I'm a big believer in fate, synchronicity and no coincidences. I clicked on the dog's profile, which had been shared more than a thousand times from a Web site called Urgent Pets on Death Row, Inc., and indeed, the 18-month-old pit mix was going to be euthanized if no one adopted him. In the past this has happened as early as the morning at Animal Care & Control, and so with no time to lose, I put down the deposit to adopt him the next day, a few minutes before midnight.

When I headed out to the Brooklyn location the next morning on Saturday, the waiting room was overflowing with cats removed from homes who had elderly owners or from Hurricane Sandy, and I went to the front to make sure Samsung was indeed safe, and there hadn't been any kind of awful error where he was put to sleep regardless of my adoption hold. They assured me he was safe, but it was going to be a few hours.

I sat and waited and tried not to let my heart break from all of the sweet cats who so desperately wanted owners around me. (The dogs are kept in the back, away from the waiting room.) Please, if you are considering adopting an animal, go to a shelter. Save a life. These animals are so precious and loving. They deserve a life, and you can give it to them.

"We were all hoping you would come!" one volunteer said, pulling up Samsung's ID number and chart, and I filled out the adoption papers which asked me things like if the dog grew or got sick would I abandon him. No, no, no.

When Samsung was brought out by volunteer Elisa Lafont, she was beaming.

Elisa comes out from Long Island to volunteer at the shelter and give the pets the attention and love they need, and she also helps to spread word of animals that are placed on "Death Row." The reason that Samsung was listed there was because, as often happens when dogs remain in a shelter, he contracted kennel cough, and because Animal Care & Control is limited in space, and accepts all animals, they cannot be a no-kill shelter. Samsung getting sick meant he was now on the "euth list," as much as everyone hated to put him there. Other than his cough, which can be cured with a course of antibiotics, he is a very healthy, happy, loving dog.

Elisa later told me, "Weird thing is I almost didn't go in Saturday. Because I was in a mood and wasn't sure. But then I saw Sam was on the list and knew I had to go in, in case I wouldn't ever see him again. So when I saw he was reserved when I woke up, I was relieved. I told him when I had him in our cuddle spot that 'I was doing my best to make sure he would make it out, that I was praying hard. To please hold on a little longer.'"

I could see just how special he was when Elisa brought him out.

"This is your new mommy," she said. "She saved your life, Samsung." Elisa gave him a special Snoopy collar to wear for the cab ride home.

He knows how to do "Paw," "Sit" and "Stay" and he licks you with appreciation. When the car service came to take us back to Manhattan, he curled up below the seat and patiently looked up at me. It was my very first night in my new studio, and my new dog would be spending it with me.

I lay out the food and water in some makeshift Tupperware, and then showed him that he was allowed to jump on the bed with me. I didn't intend to fall asleep at 8:30 p.m., but as he curled up next to me and put his paw on my hand, that's exactly what I did. My boots and jacket were still on, and the next morning we woke up at 6 a.m. Samsung nuzzled and licked me and stared up at me with his sweet soulful eyes.

"You're still a little sick, Samsung," I told him. "But you're going to get better. I'm not giving up on you."

He rested his head on my chest, and his heart beat next to mine.

Email ThisBlogThis!Share to TwitterShare to FacebookShare to Pinterest
Labels: Dogs