How George Bush won the war in Iraq - really! 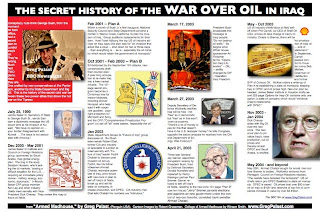 Because it was marked "confidential" on each page, the oil industry stooge couldn't believe the US State Department had given me a complete copy of their secret plans for the oil fields of Iraq. Actually, the State Department had done no such thing. But my line of bullshit had been so well-practiced and the set-up on my mark had so thoroughly established my fake identity, that I almost began to believe my own lies.

I closed in. I said I wanted to make sure she and I were working from the same State Department draft. Could she tell me the official name, date and number of pages? She did.

Bingo! I'd just beaten the Military-Petroleum Complex in a lying contest, so I had a right to be stoked.

After phoning numbers from California to Kazakhstan to trick my mark, my next calls were to the State Department and Pentagon. Now that I had the specs on the scheme for Iraq's oil – that State and Defense Department swore, in writing, did not exist – I told them I'd appreciate their handing over a copy (no expurgations, please) or there would be a very embarrassing story on BBC Newsnight.

Within days, our chief of investigations, Ms Badpenny, delivered to my shack in the woods outside New York a 323-page, three-volume programme for Iraq's oil crafted by George Bush's State Department and petroleum insiders meeting secretly in Houston, Texas.

I cracked open the pile of paper – and I was blown away.

Like most lefty journalists, I assumed that George Bush and Tony Blair invaded Iraq to buy up its oil fields, cheap and at gun-point, and cart off the oil. We thought we knew the neo-cons true casus belli: Blood for oil.

But the truth in the confidential Options for Iraqi Oil Industry was worse than "Blood for Oil". Much, much worse.

The key was in the flow chart on page 15, Iraq Oil Regime Timeline & Scenario Analysis:

"...A single state-owned company ...enhances a government's relationship with OPEC."

Let me explain why these words rocked my casbah.

I'd already had in my hands a 101-page document, another State Department secret scheme, first uncovered by Wall Street Journal reporter Neil King, that called for the privatisation, the complete sell-off of every single government-owned asset and industry. And in case anyone missed the point, the sales would include every derrick, pipe and barrel of oil, or, as the document put it, "especially the oil".

That plan was created by a gaggle of corporate lobbyists and neo-cons working for the Heritage Foundation. In 2004, the plan's authenticity was confirmed by Washington power player Grover Norquist. (It's hard to erase the ill memory of Grover excitedly waving around his soft little hands as he boasted about turning Iraq into a free-market Disneyland, recreating Chile in Mesopotamia, complete with the Pinochet-style dictatorship necessary to lock up the assets – while behind Norquist, Richard Nixon snarled at me from a gargantuan portrait.)

The neo-con idea was to break up and sell off Iraq's oil fields, ramp up production, flood the world oil market – and thereby smash OPEC and with it, the political dominance of Saudi Arabia.

General Jay Garner also confirmed the plan to grab the oil. Indeed, Garner told me that Secretary of Defense Donald Rumsfeld fired him, when the General, who had lived in Iraq, complained the neo-con grab would set off a civil war. It did. Nevertheless, Rumsfeld replaced Garner with a new American viceroy, Paul Bremer, a partner in Henry Kissinger's firm, to complete the corporate takeover of Iraq's assets – "especially the oil".

But that was not to be. While Bremer oversaw the wall-to-wall transfer of Iraqi industries to foreign corporations, he was stopped cold at the edge of the oil fields.

How? I knew there was only one man who could swat away the entire neo-con army: James Baker, former Secretary of State, Bush family consiglieri and most important, counsel to Exxon-Mobil Corporation and the House of Saud.

(One unwitting source was industry oil-trading maven Edward Morse of Lehman/Credit Suisse, who threatened to sue Harper's Magazine for my quoting him. Morse denied I ever spoke with him. But when I played the tape from my hidden recorder, his memory cleared and he scampered away.)

Weirdly, I was uncovering that the US oil industry was using its full political mojo to prevent their being handed ownership of Iraq's oil fields.  That's right: The oil companies did NOT want to own the oil fields – and they sure as hell did not want the oil. Just the opposite. They wanted to make sure there would be a limit on the amount of oil that would come out of Iraq.

There was no way in hell that Baker's clients, from Exxon to Abdullah, were going to let a gaggle of neo-con freaks smash up Iraq's oil industry, break OPEC production quotas, flood the market with six million barrels of Iraqi oil a day and thereby knock its price back down to $13 a barrel where it was in 1998.

Big Oil simply could not allow Iraq's oil fields to be privatised and taken from state control. That would make it impossible to keep Iraq within OPEC (an avowed goal of the neo-cons) as the state could no longer limit production in accordance with the cartel's quota system..

The problem with Saddam was not the threat that he'd stop the flow of oil – he was trying to sell more. The price of oil had been boosted 300 percent by sanctions and an embargo cutting Iraq's sales to two million barrels a day from four. With Saddam gone, the only way to keep the damn oil in the ground was to leave it locked up inside the busted state oil company which would remain under OPEC (i.e. Saudi) quotas.

The James Baker Institute quickly and secretly started in on drafting the 323-page plan for the State Department. In May 2003, with authority granted from the top (i.e. Dick Cheney), ex-Shell Oil USA CEO Phil Carroll was rushed to Baghdad to take charge of Iraq's oil. He told Bremer, "There will be no privatisation of oil – END OF STATEMENT." Carroll then passed off control of Iraq's oil to Bob McKee of Halliburton, Cheney's old oil-services company, who implemented the Baker "enhance OPEC" option anchored in state ownership.

Some oil could be released, mainly to China, through limited, but lucrative, "production sharing agreements".

And that's how George Bush won the war in Iraq. The invasion was not about "blood for oil", but something far more sinister: blood for no oil. War to keep supply tight and send prices skyward.

The result: As we mark the tenth anniversary of the invasion this month, we also mark the fifth year of crude at $100 a barrel.

Palast is the author of the New York Times bestsellers Billionaires & Ballot Bandits: How to Steal an Election in 9 Easy Steps, The Best Democracy Money Can Buy, Armed Madhouse and the highly acclaimed Vultures' Picnic, named Book of the Year 2012 on BBC Newsnight Review.