"Never, ever go near power. Don't become friends with anyone who has real power. It's dangerous." 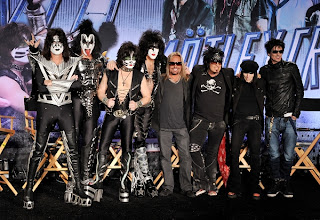 As Gene Simmons put it, "Come out, we’ll blow shit up, go home and fuck your girlfriend!"

End result: A terrible move. A better place for Tebow would have been either Jacksonvile or New England, where he could learn under the best behind Tom Brady, like how Steve Young sat for four years behind Montana.

I'm no Tebow hater, but he needs either one of two things to succeed: a team where he is either the clear starter or a competitive option to be one, or a team where he is clearly a backup without soap opera, where he can sit and learn. The Jets are the worst of all worlds, a place already with unproductive soap opera that will only get worst with Tebowmania, and his inclusion in the roster will only rattle an already suspect Mark Sanchez. Instead of having two good QBs this year they will likely have zero.

I'm a big fan of Rex Ryan (hell, the Jets were my Super Bowl pick last year) but I'm kind of worried that he may turn out to be the Billy Martin of football. A smart guy who does know strategy, a great motivator when he comes to a team, but a dude that has an act that runs thin after a couple of years. The Tebow move smacks of desperation, and it doesn't help sway my suspicions at all.

The Jets probably won't make the playoffs in 2012, and don't be surprised if they end up last in the AFC East.

End result: If anyone can repair the damage done to Smith's confidence over SF's inclusion in the Manning lottery, it's coach Jim Harbaugh.  Signing great receivers like Randy Moss and Super Bowl hero Mario Manningham helps even more, along with what should be the best defense in the NFL.  Look for the 49ers to win the 2013 Super Bowl.

* New Orleans Saints get busted over player bounty scandal, leading to coach Sean Payton's suspension by the NFL for the entire 2012 season

End result: Major bad.  What would've been in my top three teams to win Super Bowl XLVII (along with SF and the Detroit Lions) probably won't make the playoffs in a highly competitive division, even if Bill Parcells became the temporary coach.  Still, the penalties were necessary and deserved for the crimes.  Look at the Cam Newton-led Carolina Panthers winning and the Atlanta Falcons getting a wild card.  Despite the setbacks, Drew Brees will have another superstar year, and they will be back in 2013. 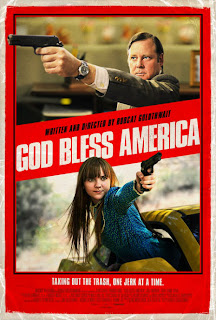 Bobcat Goldthwait has delivered a movie that may just be the perfect antidote for everything that's wrong in the USA.  Here's Richard Metzger of DangerousMinds.net describing it:

The great French film director Jean-Luc Godard once famously quipped “All you need for a movie is a gun and a girl,” but it’s unlikely that he had anything like Bobcat Goldthwait’s outrageous new satire, God Bless America in mind when he said that.

The most vicious, hilarious and timely takedown of American culture since Network, God Bless America follows the downward trajectory of the dismal life of Frank (Joel Murray), an unemployed sad-sack everyman who is given the sort of medical diagnosis that no one wants to hear. Alone, dejected, depressed and suicidal, Frank opts to put a gun in his mouth and pull the trigger, but is distracted by a monstrously selfish Beverly Hills teenager on a TV reality show. In a flash, Frank decides that if he’s going to go, he’s going to take this pampered brat with him.

Frank’s execution of Chloe is witnessed by one of her classmates, Roxy, played by Tara Lynne Barr in perhaps the single most gleefully nihilistic performances a teenage girl has ever given in all of cinematic history. Roxy’s Tarantino-esque rant about why Alice Cooper is the greatest, most influential rockstar of all time— I mean, she does prove it here beyond all argument— is one of the film’s comic highlights.

Egged on by his curiously homicidal teen accomplice, Frank decides to mow down more rude, selfish people before his disease takes him. Like a Bonnie and Clyde for the YouTube era, Frank and Roxy embark on a wave of carnage and mayhem, eliminating a blowhard TV pundit based on Glenn Beck, religious extremists and in the film’s over-the-top climax, most of the studio audience at an American Idol-type program.

As Frank so earnestly puts it: “I only want to kill people who deserve to die.” 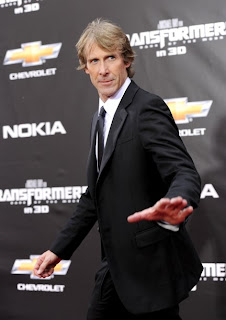 Let's hear it for cinematic auteur Michael Bay for being a voice of reason among the Teenage Mutant Ninja Turtles community. "Fans need to take a breath and chill... Our team is working closely with one of the original creators of 'Ninja Turtles' to help expand and give a more complex back story... We are just building a richer world." His calm coolness is impressive, though I wonder if it's possible to take TMNT to even greater intellectual density than the labyrinth-like tales that rivaled The Sopranos. Also, how do you top hiring Vanilla Ice to sing your theme song?

Robalini's Notes: I know Edwards is considered persona non grata at this point, but it's hard to not be cynical that the only three politicians outed in US prostitution scandals (Edwards, Eliot Spitzer and Dominique Strauss-Kahn) happen to be three guys who were potentially the biggest threats to the banking establishment...

Dick Cheney received a heart transplant from a donor.  No word what they did to the donor's body after slicing him open in offering to Satan...

YouTube Special: The Mason's Secret's in the Bible Exposed
http://www.youtube.com/watch?v=kKj4-Ct3rds

Adam Sandler Flick Jack and Jill sweeps all ten categories at the Razzies:

12-year-old Tom Schaar becomes the first skateboarder to land a 1080:

The Kentucky Wildcats (coached by John Calipari, who previously took two other schools two the Final Four without a championship) cruised to victory behind the dominating presence of Anthony Davis on defense:

Meanwhile, Baylor, led by Brittney Griner, won the women's title, capping an undefeated season  Griner may be the best female player ever, and they will be decided favorites to repeat undefeated next year, with the possibility of breaking UConn's 90-game win streak in 2013-14:

Hello friend
How are you Today Visit your Web Blog Page Got more Information you share Best Information my pray with you and Your Business get more success and Blessings in The name of LORD.
thai lottery
thailand lottery tips
lottery tips
pakistan bonds
lottery