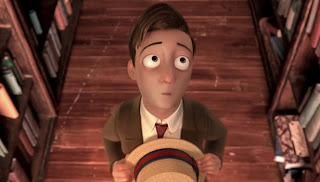 Moonbot Studios, the animation studio behind this film, is gaining hype as "The Pixar of the iPad age." If this is any indication, the studio has earned the hype. To read more about Moonbot on The Atlantic and see more photos from the film:

Moonbot's description of the film:

Inspired, in equal measures, by Hurricane Katrina, Buster Keaton, The Wizard of Oz, and a love for books, “Morris Lessmore” is a story of people who devote their lives to books and books who return the favor. Morris Lessmore is a poignant, humorous allegory about the curative powers of story. Using a variety of techniques (miniatures, computer animation, 2D animation) award winning author/ illustrator William Joyce and Co-director Brandon Oldenburg present a new narrative experience that harkens back to silent films and M-G-M Technicolor musicals. “Morris Lessmore” is old fashioned and cutting edge at the same time.

“The Fantastic Flying Books of Mr. Morris Lessmore” was the winner of best animated short film of 2011 at the 84th Academy Awards...
Posted by Robalini at Wednesday, February 29, 2012