The 'Mac' of all trades 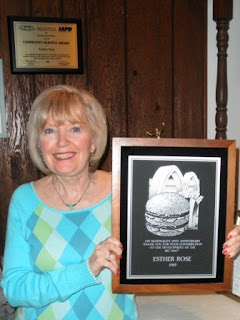 The next time you prepare to chomp into a Big Mac, take a moment first to thank Esther Glickstein Rose of Glenview.

She's the one who named it, and without her dogged persistence, the iconic sandwich may never have become a McDonald's product.

The story begins 45 years ago on a snowy winter day in downtown Chicago in 1967.

With ten dollars to her name, the 17-year-old Von Steuben High School graduate saw an ad for a secretary at McDonald's corporate headquarters. Poorly dressed and soaking wet from the commute into the LaSalle Street office, she was spotted in a hallway by a company official, who promptly hired her.

One day soon thereafter, the head of product development stopped by her desk, told her he was headed to a board meeting where they were going to name a new double burger product and asked for her suggestions.

He dismissed her idea and told her they were going to name it the Blue Ribbon Burger.

"I started laughing and told him that was a dumb name," she said.

He then told her, while he stood there, to write down ten reasons not to name it the Blue Ribbon Burger, and also to list ten other names.

She quickly typed ten reasons to nix their choice, and only one name: Big Mac.

The board chose Blue Ribbon Burger, test marketed it in Quad Cities, and it bombed.

A few months later, the manager said they were going to try again, this time calling it the Aristocrat.

She laughed, called it a "dumb" idea and again made the case for the Big Mac.

The board went with Aristocrat, test marketed it in Peoria, and it bombed again. The idea of a double burger dropped out of sight.

Fast-forwarding to 1972, Esther decided not to follow McDonald's out to its new headquarters in Oak Brook, got married and moved to Niles.

One day she walked into the McDonald's on Milwaukee Avenue in Glenview and there, on the menu, was the Big Mac!

Word spread over the years that the name Big Mac was Esther's idea.

Word also spread that McDonald's refused to compensate her, first arguing that she was an employee when she came up with the name, then many years later arguing that the statute of limitations had run out on a claim.

There were letter writing campaigns at several Glenview schools, supportive interviews with the likes of radio hosts Wally Phillips, Uncle Bobby, and Eddie and JoBo and, to this day, periodic stories on TV and in the news.

Maxim magazine even talked to her about a photo shoot using Big Macs in strategic places. "No, thank you," she said.

In 1985, McDonald's did finally send her a plaque, thanking her for her "contribution to the development of the Big Mac." But no money.

"I am not bitter," said Esther. "We've had so much fun with it. Over the years, people would say, 'there's the Big Mac lady.' And they'd want an autograph." She recalled that one fan letter was sent from New Jersey to the Glenview post office addressed to "Big Mac Lady."

But the events of forty years ago have played only a small role in Esther's life.

Her parents were among the very few members of their two families to survive the Holocaust, and came to America in 1948. Esther was eight when her mother died of cancer in 1955. But suffering only made her stronger.

"I pledged to make a good life for myself and make the best life for my children and pass a smile on to others," she said.

True to her pledge, Esther became a woman with many passions and interests, none of them requiring a toasted sesame seed bun.

At the head of the line are her two sons, Scott and Bradley, and two grandchildren.

In 2010, she received the Illinois Association of Park Districts Community Service Award in recognition of what is now 34 years of service supervising the Glenview Park District's adult volleyball program. A lifelong volleyball player, standing 5 feet 1 inch tall, she currently runs two programs a week for 28 players per class.

Theater is another of her passions. She is on the board of the Highland Park Players, which will soon be celebrating their 25th anniversary and has performed in numerous community theater productions.

A lifelong animal lover, she volunteers as an administrative assistant at the Heartland Animal Shelter in Northbrook, "where [she feels] most rewarded."

"I have never seen such dedicated people who come rain, sleet or snow to care for these animals and work so hard to find them a good home," she said.

One of her favorite quotes is: "Until one has loved an animal, a part of one's soul remains unawakened." She followed that message as two of Heartland's cats, Petey and Delsie, now live with Esther.

Esther can also be found at the Glenview Library assisting people, golfing, making photo collages, and riding with her partner, Rick Metz, on his Harley. She's penned numerous short stories and produced a book of over 100 poems, too. Her latest fascination?

"Tap dancing," she says with an enchanting smile. "A teacher once commented about me, 'I try my best.' I may not be the best at many things, but I always try my best."

She also worked for 14 years as an advertising sales assistant for Gulf Publishing, and would love to pick up a similar post-time position today to help make ends meet.

Of course, in that regard, there's always the chance McDonald's may at long last make amends, too.

"It is not too late," smiled Esther. "If they still want to give me something I would love it."
Posted by Robalini at Wednesday, February 29, 2012