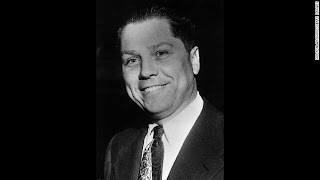 STORY HIGHLIGHTS
Former Teamsters leader Jimmy Hoffa hasn't been seen since July 30, 1975
Theories swarm around the whereabouts of him, or his body
A new search has refueled our fascination and more theories

(CNN) -- His middle name was Riddle, and that's what his whereabouts have been for the last 37 years.

Maybe, the story went, Jimmy Hoffa was disposed of under the old Giants Stadium in New Jersey. Or perhaps he was buried in a Michigan horse farm. One colleague said his body had been incinerated. Still another theory was that he was taken to a Florida swamp as alligator food.

Or, as one person said at the time of his disappearance, he wasn't dead at all. He'd taken off to South America in the company of a go-go dancer.
To date, none of these theories have panned out. But wherever the truth may lie, one thing is for certain: Jimmy Hoffa -- former Teamsters leader, convicted felon, Kennedy enemy and alleged mobster cohort -- hasn't been seen since July 30, 1975.

On Friday, police again looked for the union boss, who was declared dead in 1982, under the driveway of a house in Roseville, Michigan, just outside Detroit. A tipster told police that a body was buried at the spot around the same time the Teamsters head disappeared. Police found no "discernible remains" in the search, police Chief James Berlin said.

It's a disappearance that has held on to the public's imagination far longer than Hoffa was in power -- a testament both to Hoffa's high profile and the power of mystery, says pop culture expert Robert Thompson of Syracuse University.

"In this world of enlightenment and science and blogs and the Internet, there are still a few mysteries," he says, ticking off the Loch Ness monster and the questions surrounding the Kennedy assassination as other examples.

A bad boy with a lingering legacy

Indeed, Hoffa's disappearance seems ready-made for such speculation. He was an incredibly influential figure, perhaps the most famous union leader of his time -- a time when labor presidents such as the United Auto Workers' Walter Reuther and the AFL-CIO's George Meany regularly commanded headlines. He maintained a base in Detroit, blue-collar home of the brawny auto industry.

And he had a bad-boy aura, both for his pugnacious leadership and his alleged ties to organized crime. In fact, some Kennedy conspiracy theories tie Hoffa to the president's assassination.

Part of the Hoffa fascination certainly comes from the attention his disappearance earned at the time, says Thompson. But it's the organized crime touch that gives the story a jolt of electricity.

"You get the voltage that comes from the media coverage that turned this into a myth," he says, "(as well as) what it was he did, which is not only the stuff of news, but the stuff of 'The Sopranos' and 'The Godfather.'"

There are also the circumstances leading up to his death. Two weeks before Hoffa's disappearance in 1975, federal investigators discovered that hundreds of millions of dollars had been stolen from the Teamsters' largest pension fund, Time magazine points out in its list of the top 10 most famous disappearances.

Hoffa was last seen at Machus Red Fox restaurant in suburban Detroit, ostensibly to meet with reputed Detroit Mafia street enforcer Anthony Giacalone and Anthony Provenzano, chief of a Teamsters local in New Jersey, who was later convicted in a murder case. Hoffa believed Giacalone had set up the meeting to help settle a feud between Hoffa and Provenzano, but Hoffa was the only one who showed up for the meeting, according to the FBI.

Giacalone and Provenzano later told the FBI that no meeting had been scheduled. Both men have since died. The current tipster used to do business with a man who had ties to Giacalone.

It's no wonder that Hoffa has inspired several Hollywood films, including "Blood Feud" (a 1983 TV movie about Hoffa, the Kennedys and gangsters that starred tough guy Robert Blake), "Hoffa" (a 1992 feature starring Jack Nicholson and written by David Mamet) and "F.I.S.T." (a 1978 film about a fictionalized Hoffa, starring Sylvester Stallone).

The appeal of the unsolved mystery runs deep, of course. They're the bread and butter of police procedurals: There's a reason that such shows as "CSI" and "Bones" have had such long lives (never mind the enduring attraction of Sherlock Holmes, who's also the subject of a new TV series). Such mysteries also touch on our interest in the supernatural, whether it's over religious icons, ghosts or visitors from outer space.

And, like an audience pondering a well-executed magic trick, there's something to be said for our inability to simply figure something out, despite having all the clues at our fingertips.

"For years now, we have had the sense that stuff is provable and solvable. Whenever anything defies that, it naturally becomes the stuff of extreme curiosity," says Thompson.

Of course, these stories tend to have an expiration date, and more than a generation after his disappearance, Hoffa's may be nearing his. Before Hoffa, one of the most famous missing-persons cases was that of New York Supreme Court Justice Joseph Crater, who disappeared in 1930 -- like Hoffa, he was last seen in a restaurant -- and inspired years of speculation and pop culture references ("Judge Crater, call your office" was a popular one-liner). Though the Crater mystery has yet to be solved, few people are even aware of the judge anymore. Why should they be? It was a lifetime ago.

Besides, if the Hoffa mystery is solved, that fascination will likely be replaced by letdown. Sometimes it's better -- at least for the sake of pop culture riffs -- to let missing union leaders lie.

"This idea that nobody knows what happened to Jimmy Hoffa represents something I think we need and hold on to," says Thompson. "The inability of the human mind to solve the Jimmy Hoffa disappearance story was actually important to our collective soul in a weird sort of way."