Why Obama Is the Least Efficient Antichrist Ever 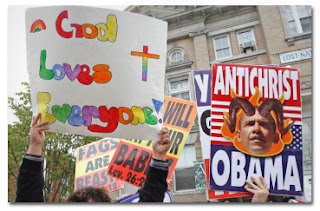 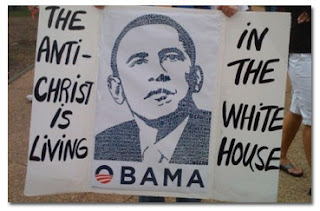 In the weeks leading up to the November election, President Obama will be doing everything within his power to remind the American people of his successes in office while simultaneously qualifying his mistakes. However, he will avoid one topic at all costs, because it has been, without a doubt, his most dismal failure. Regardless of whether you think Barack Obama has been a fit leader for the United States, he has been unquestionably bad at being an antichrist.

Four years ago, there was a lot of excitement around the promise of "change," and many Americans may have overestimated the potential for large-scale reform. Admittedly, it was hard not to be swept up in the magic of it all, in the possibilities of a man who seemed almost supernatural. But in retrospect, it proved a lot to ask of one person -- to be the answer to all our hopes and dreams, as well as the harbinger of the apocalypse.

But even knowing that he couldn't accomplish everything, it was like Obama wasn't even trying at any of his duties as the ruler of hell on Earth. When he should have been breaking his covenant with seven nations and declaring himself God within their temples, instead he bought a dog. When he was supposed to be searing his mark into the hands and foreheads of his worshipers and executing anyone who refused the brand, he was off singing Al Green songs at the Apollo.

Now, we all understand that big jobs require flexible time frames; the Abu Ghraib fiasco at the beginning of his presidency prepared us for that. But the antichrist is already supposed to be slaughtering the righteous and governing the world from a throne in Israel by his third year in power. Obama has done nothing but drag his feet and procrastinate about being unabashedly evil deep into his fourth year. Where is the colossal statue of him that springs to life and kills Christians? Where is the fire pouring out of the sky into the eyes of men? I don't even think he's drawn up any schematics.

Needless to say, those of us who expected Obama to reveal himself as the beast of sorrow and despair are more than a little disappointed. Instead, we got universal health care and environmental protection acts. And now he has the nerve to ask for another four years to get everything done. Yeah right, Barry. If you're not going to take this seriously, we'll wait for the next antichrist, thank you very much.

We're beginning to question if Obama even has wicked horns.

Of course he has his apologists, making videos for YouTube and cluttering their own websites with adamant declarations that he is in fact the true antichrist. But these people are the die-hard Obama believers who started stocking up on assault rifles the moment he was elected. They want him to be the manifestation of evil so badly that they are blind to the truth we're all staring in the face after four years: Barack Obama is probably not the antichrist. It is entirely possible he is just a human male. So when you walk into your respective polling booths this November, remember: If you just want a regular old president, fine, vote for Obama. But if you are looking for world reorganization under the cloven hoof of physically manifested agony, maybe it's time to give some other guy a shot.