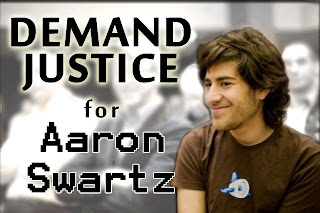 Support "Aaron's Law" and inquiry into his prosecution
http://act.demandprogress.org/sign/aaron_justice

Robalini's Note: Some people wonder if Swartz's death was really a murder and not just a suicide.  In the end, it's a pretty minute distinction.  Either way, the primal cause of his death was the over-the-top harrassment of him by the DOJ due to opposition of White House hit lists and his defense of free speech against korporate power.  By suicide or "suicide" the death of Swartz has the fingerprints of the US establishment (including Barack Obama) all over the place...

We spent Tuesday burying and mourning our friend Aaron. We're sad, we're tired, we're frustrated -- and we're angry at a system that let this happen to Aaron.  Now we want to set upon honoring his life's work and helping to make sure that such a travesty is never repeated.

We and Aaron's friends and family have been in touch with lawmakers to ask for help, and several of them -- who've worked with Aaron and Demand Progress on SOPA and other issues -- are beginning to take action.  We're asking them to help rein in a criminal justice system run amok. Authorities are encouraged to bring frivolous charges and hold decades of jail time over the heads of people who are accused of committing victimless crimes.

1) Representative Zoe Lofgren has introduced what's been named  "Aaron's Law."  It would fix a key part of the Computer Fraud and Abuse Act (CFAA), which is one of the statutes under which Aaron was indicted.  We need to pass Aaron's Law AND further amend the CFAA.

The CFAA makes violations of a website's terms of service agreement or user agreement -- that fine print you never read before you check the box next to it -- a FELONY, potentially punishable by many years in prison.  That's how over-broad this dangerous statute is, and one way it lets showboating prosecutors file charges against people who've done nothing wrong.

Aaron's Law would decriminalize violating these agreements: They're essentially contracts, and as with other contracts, disputes about them should be settled in civil courts rather than in out of control criminal trials under threat of decades of prison time.As currently written, Aaron's Law alone wouldn't have saved Aaron -- there is still more to do to make sure that victimless computer activities are not charged as felonies -- but this is a solid start that we can pass now and it's a law he wanted to change.  Then we'll keep pushing forward.

2) Additionally, we asked Congressman Darrell Issa -- who controls the powerful Oversight Committee -- to open an investigation into prosecutorial misconduct in Aaron's case. Amazingly, he's already responded and is dispatching a staffer to investigate the U.S. Attorney who was pressing charges against Aaron.

We want the inquiry to proceed, and to be broadened to include a more thorough investigation into rampant over-prosecution of alleged crimes with no victims -- as in the case of what Aaron was accused of.  And we want those who abused their power to be held to account.

We loved Aaron -- so many people loved Aaron -- and his death is tragic.  We and others who were close to him are overwhelmed by the outpouring of support, and the calls for justice.  Thank you for joining us in that fight.