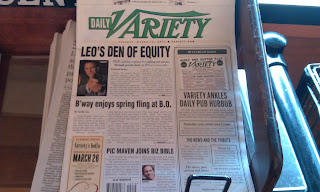 A newly deciphered Egyptian text, dating back almost 1,200 years, tells part of the crucifixion story of Jesus with apocryphal plot twists, some of which have never been seen before.

Written in the Coptic language, the ancient text tells of Pontius Pilate, the judge who authorized Jesus' crucifixion, having dinner with Jesus before his crucifixion and offering to sacrifice his own son in the place of Jesus. It also explains why Judas used a kiss, specifically, to betray Jesus — because Jesus had the ability to change shape, according to the text  — and it puts the day of the arrest of Jesus on Tuesday evening rather than Thursday evening, something that contravenes the Easter timeline.

The discovery of the text doesn't mean these events happened, but rather that some people living at the time appear to have believed in them, said Roelof van den Broek, of Utrecht University in the Netherlands, who published the translation in the book "Pseudo-Cyril of Jerusalem on the Life and the Passion of Christ"(Brill, 2013).

Peter Griffin: "Holy crap! This is almost as bad as the time I hosted the Oscars, and all I could do was tell jokes about famous actresses' boobs..." 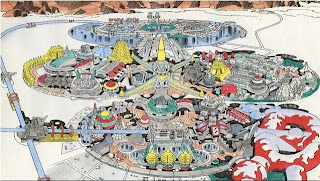 In 1979, Geller penned Lord of Light, an adaptation of Roger Zelazny's Hugo Award-winning sci-fi novel. The title morphed into Argo when the CIA evacuated six US diplomats from Iran by turning them into a film crew. But contrary to how Affleck's film portrays it, the script wasn't just some jokey, throwaway nonsense a hack writer shat out. It was the opening salvo for a dream that would change the world.

With assistance from sci-fi visionaries Ray Bradbury, Paolo Solari, and artist Jack Kirby, Geller was using the script to help fund a science-fiction theme park named, appropriately enough, Science Fiction Land. Science Fiction Land would have been a place for top scientists to show off their gadgets to the public. In other words, something that's way more exciting than the movie Argo. (My friend described the situation best by saying, “Maybe this makes me a bad person, but I want to live in the alternate universe where a couple of Americans died in Iran and this theme park exists.”)

While the park's long dead, an Oscar-based jolt of enthusiasm has Geller kicking the tires on finally seeing his original script turned into a film, and he's the subject of a forthcoming documentary called Science Fiction Land.

To read the interview with Geller:

All the DNA in a human body could fit inside one ice cube.
Fastest-healing part of the human body: the tongue.
Only joint in the human body that can rotate 360 degrees: the shoulder.
Right-handed people tend to scratch with their left hand, and vice versa.
Every day about 10 billion tiny scales of skin rub off your body.
Scabs are nature's Band-Aids. They start to form less than 10 seconds after you get cut, and they keep germs out while the cells underneath make new skin.

MuscleRev Xtreme was specifically created for one thing: to give men the level of focus needed to achieve the muscular builds they always wanted. Quick results and lean bodies are all possible with MuscleRev Xtreme - USE AS DIRECTED.

We are a one of a kind sports performance institute. A rare combination of a highly advanced medical office combined with a state- of-the-art sports training center.

WHO ARE OUR CLIENTS?

Everyone from professional athletes to everyday folks. We are willing to work with anyone who wants to enhance their lifestyle.

WHAT TYPE OF SERVICES DO YOU OFFER?

*Personal Training- setting up a custom workout designed specifically to your needs.

WHAT IF I LIVE ELSEWHERE?

Many of our clients fly into Miami or Ft. Lauderdale to take advantage of our services. We can help you with everything from transportation to a hotel, or extended stay.

The incredible story of the young women of Oak Ridge, Tennessee, who unwittingly played a crucial role in a significant moment in U.S. history.

Willa Paskin of Salon has a great article on the genius of the 1980s TV series Moonlighting that had Bruce Willis at his best:

“Moonlighting,” the wonderful romantic comedy co-starring Bruce Willis and Cybill Shepherd as bantering, codependent private detectives, aired on Tuesday nights on ABC from 1985 to 1989.  Unlike many of its contemporaries, “Moonlighting” remains a cultural touchstone — also airing on Tuesdays during those years, “The A-Team” and “Matlock”! — in large part because of the long shadow it has cast on TV romances: You know, the “Moonlighting” curse. But the focus on the curse has unfairly narrowed “Moonlighting’s” legacy. It means that when we talk about “Moonlighting,” we’re usually talking about what “Moonlighting” got wrong, and that, as David Addison might say, makes about as much sense as zebras speaking Martian. “Moonlighting” is and was stunningly modern, hilarious and energetic in a still breathtaking way, meta before meta was standard, a social media series before there was social media. (The first show to talk about the “Moonlighting” curse was basically “Moonlighting.”) So, forthwith, a consideration of “Moonlighting” that has nothing to do with romance at all.

“Moonlighting” tells the story of David Addison and Maddie Hayes, the id and the superego who, together, made for one kicky brain. David’s a loosey-goosey rapscallion who can talk to anyone and likes to limbo in the office, a walking, talking, witty good time, and she’s conscientious and responsible, witty and willful in her own, less charismatic way. (It’s the grace with which Shepherd accepts her not as-charming-as-Willis lot that actually makes her the proper foil for him: She’s got guts.) David’s all spontaneity, Maddie’s all for thinking things through; David wants to be everyone’s friend, Maddie has a hard time being anyone but David’s; David needs to grow up, Maddie needs to loosen up. But even with all these differences, like all good screwball couples, they have one thing in common: They both love to argue, with each other. Arguing, bantering, infuriating, playing, fighting, making up — all at top volume — are their favorite activities, and they make them look like fun.

“Moonlighting” made Bruce Willis a star, and it is impossible not to understand why: Watching him in this show is to immediately grasp the entire Bruce Willis “thing,” to understand the fount of his charm and why he will be dishing out one-liners for the rest of his life. The unique thing about David Addison is that he is a manly man who never, ever shuts up. Forget tall, dark and stoic: David Addison is one of the chattiest Cathies in the history of television, a talk, talk, talker who, yes, did kind of clam up when it came to his feelings. (This is why, to me, even the people who love Willis because he was John McClane — so most people — just love Bruce 2.0. John quips, but he doesn’t babble. The id is already under control, and with every year, as the Willis jaw gets more and more square and set, his twinkle fades.)

There are other fictional characters who have Addison’s sort of devil-may-care swagger (Han Solo is a clear antecedent, Raymond Chandler’s private dicks liked language as much), but the only ones who are as verbal are basically Woody Allen and his descendants. But David is not a neurotic and he’s not rambling because he’s uncomfortable with the rest of his body. The degree of difficulty in writing and in performing this sort of part, in essentially upending accepted macho behavior by making unaccepted, typically feminine behavior seem macho is so hard that very few characters like this exist on TV... 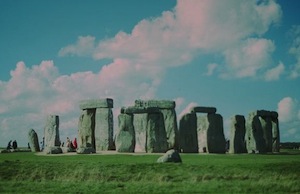 Thanks to Disinfo.com for the following:

British researchers on Saturday unveiled a new theory saying Stonehenge was originally a graveyard and venue for mass celebrations. The findings would overturn the long-held belief that the ancient stone circle was created as an astronomical calendar or observatory.

A team of archaeologists led by Professor Mike Parker Pearson of University College London carried out a decade of research which included excavations, laboratory work and the analysis of 63 sets of ancient human remains. They said the original Stonehenge Appeared to have been a graveyard built around 3000 BC. Analysis of cattle teeth from 80,000 animal bones excavated from the site also suggest that around 2500 BC, Stonehenge was the site of vast communal feasts.

“People came with their animals to feast at Stonehenge from all corners of Britain—as far afield as Scotland,” Parker Pearson said—the “only time in prehistory that the people of Britain were unified.”