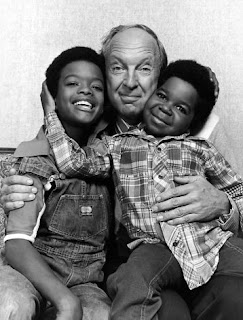 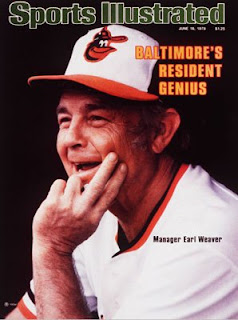 Which manager has the highest winning percentage in MLB since 1960?  Earl Weaver of the Baltimore Orioles... 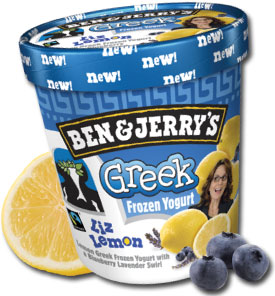 30 Rock, a show that went out like a great show is supposed to.  In honor of Tina Fey, Ben & Jerry's has introduced  a Liz Lemon Greek Frozen Yogurt...

Is it just me, or is anyone less upset about Lance Armstrong's drug doping than his choosing to admit it in an interview with Oprah?  Come on, Lance!  If you're gonna owe up to cheating, at least do it with an interview with some guts like Bob Costas!!!

As the 50th anniversary of President John F. Kennedy's assassination approaches, the mystery surrounding the murder has inspired another indie movie, as Tommy Alastra and Joe Mundo of 13th Sign Pictures have signed on to finance and produce "Dallas in Wonderland," a conspiracy thriller that will be directed by Ryan Page ("Queens of Country").

Written by Page and Adam Parfrey, contemporary story follows a documentary filmmaker and his female producer who are hired by a major TV network to do a puff piece for their planned motorcade reenactment that will take place during a televised memorial ceremony. Finding themselves wrapped up in the network's plot to prove that Lee Harvey Oswald acted alone, the duo close in on the central narrative surrounding one of history's greatest murder mysteries, triggering the climax of JFK's assassination to play out in front of a worldwide TV audience.

"Adam Parfrey and I [have] crafted what feels to us like an altogether new kind of thriller, featuring the very latest research done in the JFK assassination case," said Page, who will produce with Alastra and Mundo. "This story has not fully been told. It continues to evolve and is rife with the most interesting storylines and fascinating real-life personalities I worked with Joe and Tommy on previous films and when it came time to select our production partner for 'Dallas in Wonderland,' there was never even a debate."

The JFK assassination serves as the basis for writer-director Peter Landesman's Playtone-produced indie "Parkland," which will star Paul Giamatti as Abraham Zapruder, while director Jonathan Demme spent some time developing an adaptation of Stephen King's novel "11/22/63," though he let the project go when his option expired.

13th Sign Pictures, which is focused on telling original stories and will serve as a collaborative home for filmmakers, most recently produced the documentary "Sunset Strip," which debuted at SXSW and will air on Showtime this spring.

Parfrey owns and operates Feral House, which has been publishing innovative and celebrated non-fiction books since 1989. He also co-founded the new imprint Process Media.

Page, who directed the Lizzy Caplan-Ron Livingston pic "Queens of Country," is repped by WME and Untitled.

S. John Ross (Pope Leo). The mind behind Novus Ordo Discordia, the Gospel of St. Pesher the Gardener, author of Steve Jackson Games’ Warehouse 23, creator of Risus and fonts used by Discordians, and “foreplayer” (foreword writer) for Ek-sen-trik-kuh Discordia: The Tales of Shamlicht. Patriarch Wilhelm Leonardo Pesher-Principle was a major contributor to Apocrypha Discordia, likely the first (and often considered one of the best) Discordian work of the 21st century.

Adam Gorightly. Author of The Prankster and the Conspiracy: The Story of Kerry Thornley and How He Met Oswald and Inspired the Counterculture. This is considered the primary work covering Thornley and the early Discordians, and uncovered much that was unknown. The Shadow Over Santa Susana: Black Magic, Mind Control, and “The Manson Family” Mythos is one of the most complete compilations of Charles Manson and the Manson family. He is known as the “Crackpot Historian.”

The Order of the Pineapple (aka The DisOrder of the Pineapple) honors those who contribute to discord and ek-sen-trik tendencies above and beyond the call of duty. It was first given in 1982 and is given each year on January 18 which is Pat Pineapple Day. Last year’s winners were Doctor Demento and R. Crumb. To see a list of all winners, visit:

Congratulations to the new winners! Remember to eat something having to with pineapple on January 18!

Center for Science in the Public Interest
http://www.cspinet.org 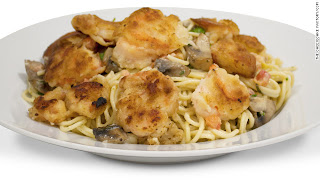 Bistro shrimp pasta from The Cheesecake Factory. This dish of crispy battered shrimp, fresh mushrooms and arugula is tossed with spaghettini in a basil-garlic-lemon cream sauce. It weighs in at 3,120 calories, 89 grams of saturated fat and 1,090 milligrams of sodium, according to CSPI, equal to three lasagna classico entrees and a tiramisu from Olive Garden.

Cheesecake Factory's crispy chicken costoletta was not too far behind. According to the menu, it's a chicken breast lightly breaded and sautéed to a crispy golden brown. It is served with a lemon sauce, mashed potatoes and fresh asparagus. According to CSPI, it also has 2,610 calories, more than a 12-piece bucket of original recipe Kentucky Fried Chicken, and 4½ days' worth of saturated fat.

Country fried steak and eggs at the International House of Pancakes, or IHOP, has 1,760 calories, 23 grams of saturated fat, 3,720 milligrams of salt and 11 teaspoons -- nearly two days' worth -- of sugar, CSPI said.

The veal porterhouse at Maggiano's Little Italy has roasted garlic, caramelized onions and lemon with crispy red potatoes. It also has 2,710 calories, 45 grams of saturated fat and 3,700 milligrams of sodium, the CSPI report said.

Smoothie King's peanut power plus grape smoothie may sound healthy, but the 40-ounce size has 1,460 calories and 22 teaspoons of sugar.

Chili's full rack of baby back ribs with Shiner Bock BBQ sauce comes with homestyle fried and cinnamon apples. It also comes, according to the report, with 2,330 calories, 45 grams of saturated fat and 6,490 milligrams of salt.

And finally, Uno Chicago Grill's deep dish macaroni and three cheese had a day's worth of calories -- 1,980 -- and more than three days' worth of saturated fat, 71 grams. According to CSPI, it also contains 3,110 milligrams of sodium.

"Anyone who has never made a mistake has never tried anything new."

"I never made one of my discoveries through the process of rational thinking."

Konformist Book Club: Urban Gardening
How To Grow Food In Any City Apartment Or Yard No Matter How Small
Will Cook

You could be just months away from a harvest of delicious, fresh organic food from your urban garden. Learn how to:

Grow A Garden On Your Balcony Or Rooftop

Even if you only have a tiny balcony to work with, you can grow fresh food and flowers there. You've probably already considered container gardening - but what about vertical gardening with vining plants that can grow up the wall or using a vertical aeroponics gardening system that can grow 20+ plants in a 4 square foot area?

And rooftops are the perfect spot for an urban garden! Not only will you love all the fresh food but the building owner will love the reduction in their heating and cooling bills and the fact that the rooftop will need less repairs and maintenance due to the protection from the plants.

Grow Vegetables And Fresh Food With An Indoor Garden

Even if you only have a window sill to work with or just a small area by a window, you can build or buy a window garden to grow at least 20 food plants like tomatoes, lettuce and kale.

You don't need fancy equipment or expensive gear to start an indoor urban garden - just a little bit of creativity and the plans and step by step instructions included in this book.

Also included is a list of the 15 best indoor plants for cleaning, purifying and removing toxins from polluted city air. Even in the heart of Manhattan you can breath fresh, pure air thanks to these incredible plants that have been studied by NASA and proven to remove pollutants like benzene, formaldehyde and Volatice Orcanic Compounds (VOCs).

You might only have a very tiny yard to work with - that's okay! You can still grow a lot of incredible, fresh food and enjoy your beautiful garden. Even if you don't have a yard to work with, there's probably an abandoned plot of land somewhere in your neighborhood. You can start a community garden there often without any cost using the land as long as it's a community project. Not only will you be helping beautify the city but you'll be helping your community as well. Did you know communities that garden have lower crime rates and the residents live longer, happier lives with less stress? What if you could leave a legacy in your community by starting an urban garden?

How To Start A Garden For Beginners

Whether you're a complete beginner or just want to learn more, this gardening guidebook will teach you everything you need to know to enjoy the fruits of your own special garden. Every section includes action steps, pictures and step by step tutorials so you will know what to do and how to do it to create your perfect garden.

You'll learn how to start your own aeroponics vertical garden for less than a few hundred dollars. In the past, aeroponics and hydroponics systems were only available to the wealthy and those with extensive knowledge of agriculture and hydroponics.

If you're looking for gardening books on kindle and you're ready to start an urban garden, this is the book for you!

Here's a fun to-do list: it would probably take a while (and I believe some of the early films are actually orphan films with no existing copies) but to watch the entire John Wayne Westerns from beginning to be end is a worthy feat for any do-before-you-die. And maybe throw in his performance as Genghis Khan in The Conqueror as a bonus. (Or maybe not...)

I got this site from my friend who shared with
me on the topic of this site and now this time I am browsing this website and reading very informative content at this place.