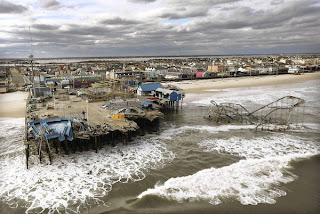 It’s déjà vu all over again: a huge chunk of the nation is reeling from extreme weather – in this case, the devastation wrought by Hurricane Sandy, the so-called “Frankenstorm.”

Scientists tell us you can’t blame any one weather event on climate change. But they do say warmer water energizes tropical storms like Sandy. And they say a warming world puts more moisture in the atmosphere, which tends to bring greater rainfall totals when heavy weather strikes. And they point out that storm surges like the ones we’ve seen this week do more damage when sea levels are already elevated before the storm strikes.

Keep in mind that all three of these climate-related trends — rising sea surface temperatures, global average temperatures, and sea levels — are all expected to continue because of climate change.

Now consider what that means for the insurance industry, and the families and businesses across America who rely on insurance as a bulwark against financial ruin. Consider that weather disasters in 2011 alone led to $32 billion in insured losses in the United States. And consider that those losses included historic heat, widespread drought and wildfires, and Mississippi flooding — all of which, scientists say, are previews of disasters likely to become more common in a warming world.

At Ceres, we believe insurance companies and regulators would be foolish to ignore the truth: As the Earth heats up, the odds of severe weather events increase, and the risks of covering vulnerable communities rise, as well. The abnormal is becoming the new normal, and the insurance industry needs to face facts.

Our new report, “Stormy Future for US Property and Casualty Insurers: The Growing Costs and Risks of Extreme Weather Events,” lays out a plan of action for insurance companies, regulators and investors to deal with the increasing risks. And it shows how the insurance sector can actually help our country adapt to climate change, and help the world curb the worst effects of global warming.

Beyond facing up to the realities of a changing climate, America’s insurance sector can play an important role in helping the nation adapt. There is plenty of precedent. For example, by making insurance contingent on building standards, insurance companies have helped minimize the damage from fires and earthquakes. And by offering cheaper rates for cars equipped with air bags and other safety features, insurers have encouraged automobile safety.

In a similar way, the report says, standards for insurability and insurance rate incentives for smart building can help steer land-use planning decisions, infrastructure design, and building codes in ways that makes communities less vulnerable to disaster and more resilient when catastrophe strikes.

Insurers can also get a better handle on their climate change exposure by supporting research into national and regional forecasting of severe weather patterns. They can even offer products and services that incentivize clean, efficient energy, in order to lessen the burning of fossil fuels and address the root cause of climate change.

Leading insurers and re-insurers are already addressing their risk from a changing climate and increasing severe weather. The rest of the insurance sector should follow suit.

A clear-eyed look at the risks inherent in a warming world — and at what can be done to mitigate those risks — makes for a stronger insurance industry, a more resilient economy, and a better-prepared region and nation.

Mindy Lubber is president of Ceres, a Boston-based nonprofit organization mobilizing business leadership on sustainability challenges. Details of the “Stormy Future’’ report can be found at: