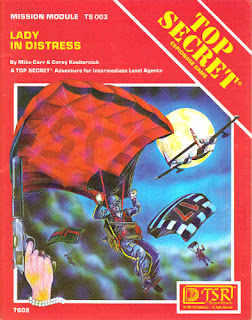 While discussing terrorism with Kenn Thomas of SteamshovelPress.com, I mentioned to him I had blueprints to the MS Achille Lauro.  He found this fascinating, and I explained in 1982, I bought a module for the Top Secret roleplaying game about a terrorist hijacking of a cruise ship, and the designers had used the Achille Lauro as their model.  This was three years before the actual terrorist plot.  While Wikipedia claims the ship was "based" of the Achille Lauro blueprints, it's likely the game designers just copied the blueprints completely.  KT suspects, with good reason, the module was probably bought and used by the PLO terrorists to study the ship.  The blueprints should be in the upcoming book Popular Parapolitics by Kenn.

"Mission aborted! On their way to raid the secret headquarters of a gang of international terrorists, a group of top agents is diverted to an even more critical danger. A luxury liner carrying microbiologist Dr. Miguel Salcedo, and samples of a new and deadly strain of bacteria, has been captured by terrorists. The agents must race against time to neutralise the terrorist, rescue the doctor, and regain the bacteria before it can be released upon he unsuspecting world."

Wikipedia's info on the module:

This module's plot involved agents parasailing to rescue a hijacked cruise ship. Interestingly, the module's ship plans were based on the MS Achille Lauro, which was seized by PLO terrorists in 1985 and resulted in the murder of one passenger.