I WAS ELVIS’ SEX COACH 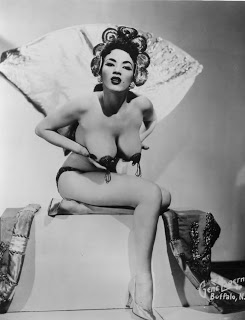 Tura Santana is best known for her role as "Varla" in  Russ Meyer's 1965 classic Faster, Pussycat! Kill! Kill! But she also claims to have been Elvis Presley’s sex coach.

“When we first started out, he was kinda like ‘wham, bam, thank you, ma’am,’ until I showed him what to do. Eventually he became much more sophisticated.” Does that mean Elvis became a good lover? “Yes, it was worth the effort,” Tura says, closing her eyes. Elvis was becoming more passionately adept, but there was one very important amorous pleasure he had yet to experience. “Four or five nights later I showed him how to give head.” Tura grins. “He hadn’t done it yet.” Tura instructed Elvis in one of life’s finest sensual arts. “When a man wants to give you pleasure, that’s what makes the difference—‘Honey, not so hard there, just nibble, and when you find that little man, nudge him. Several times. But try to do it gently at first... then a little harder... when you’ve got him nice and hard, then you start to suck...’