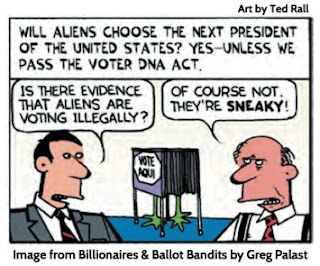 “There is a massive effort underway to register illegal aliens in this country!”
– Arizona State Senator Russell Pearce

The Arizona Republican hunt for "aliens" from Uranus to the Rio Grande has led to the removal of over 200,000 citizens, overwhelmingly Latino, from the state's voter rolls.  There's more than an even chance that vote "suppression" - the polite word for racist, José Crow racial tactics - will result in the Democrats losing an open seat in the U.S. Senate where Democratic Hispanic Richard Carmona is pulling ahead of Republican Jeff Flake.

But I don't think Carmona wants to win with illegal alien votes.  After all, an alien voting has committed a crime - yet no one was arrested.  Why?  I flew out to Phoenix to investigate – and ended up in jail. That is, I visited the infamous tent prison of Sheriff Joe Arpaio who has led the alien hunt in his state.

But before I broke into Arpaio's prison, I called his political ally, Arizona State Senator Russell Pearce, who sponsored one of the nation’s nastiest ID laws, Prop 200. It requires all new voting registrants to prove they are US citizens.

When I heard about all these illegal aliens wading the Rio Grande, I had to call Senator Pearce’s office.

“How many illegal aliens have actually been registered?” I asked.
Pearce’s PR flak told me, five million. All Democrats too.
FIVE MILLION? WOW!! Our investigations team flew to Arizona to look for these hordes of voters swimming the Rio Grande – just so they could vote for Obama.

His five million alien voters came from a Republican website that extrapolated from the number of Mexicans in a border town who refused jury service because they were not citizens. Not one, in fact, had registered to vote: they had registered to drive. They had obtained licenses as required by the law.

The illegal voters, “wetback” welfare moms, and alien job-thieves are just GOP website wet-dreams, but their mythic PR power helps the party’s electoral hacks chop away at voter rolls and civil rights with little more than a whimper from the Democrats.

There are only four proofs of citizenship in the USA:

1. If you have your original birth certificate. Good luck with that, especially among the Hispanic poor who had home births and little access to such records.

2. A US passport. (Not many of the clerks working at Wal-Mart look like they’d just come back from their ski vacation in the Alps.)

3. Naturalization papers. If you become a citizen, you have documents that say so. The problem is that most Hispanic families in Arizona were citizens of the USA before there was a USA. They are natural, not naturalized, citizens, and so don’t have the papers.

4. White skin. In Arizona, according to the US Justice Department, the cops accept that white skin is a proof of citizenship. Maricopa County (Phoenix) Sheriff Joe Arpaio is on trial for having his cops stop citizens of brownish hue, demanding their citizenship papers and tossing them in the hooskow when they don’t.

I tested the white-skin-is-citizenship rule myself. I went to visit Arpaio’s famous (infamous?) open-air prison in the desert. You can see the sign, ILLEGAL ALIENS ARE PROHIBITED FROM VISITING ANYONE IN THIS JAIL – SHERIFF JOE ARPAIO. What if he found out that Grandma Palast snuck in from Windsor, Canada!

Not to worry: the sheriff ’s crew was happy to escort me and my investigations chief, Badpenny, around Tent City, and the deportee-sniffing professionals never asked for her citizenship papers. She doesn’t have them because she’s not a citizen. But she did remember to bring her white skin.

But hunting for illegal aliens isn’t the point. Arizona Hispanics vote two-to-one Democratic and if they were all allowed to register, the Republican sheriff and the state GOP would be toast. Or, I should say, tortillas.

And it’s darn effective. So far, not one illegal alien has been caught voting – but one in three registrations in Phoenix have been rejected.

But you can't fool all of the voters all of the time.  On November 21, 2011, Russell Pearce was re-called and removed from office by the voters of Arizona.  Apparently, his José Crow tactics are alien to most citizens of the state.

Much of the work exposing Pearce and his racial trickery goes to Democracy for America.  We are proud to have DFA as an action group partner in the release of Billionaires & Ballot Bandits.

Go to BallotBandits.org for other Action Groups, the book, excerpts and the 7 Ways to Beat the Ballot Bandits free poster/leaflet download.

Last month Palast released his new book Billionaires & Ballot Bandits: How to Steal an Election in 9 Easy Steps, and instant NYT bestseller in its debut week.

Heу Thеre. I found уour blog
using msn. Τhis is an extremely well writtеn artісle.
Ӏ'll make sure to bookmark it and come back to read more of your useful information. Thanks for the post. I will definitely return.

It's very effortless to find out any topic on web as compared to textbooks, as I found this post at this web page.

Excellent post! We wіll be linking to thіs
pаrticulаrly great contеnt on ouг site.
Keep up the gгeat wгitіng.

Ηеllo! I've been following your web site for a while now and finally got the courage to go ahead and give you a shout out from Humble Texas! Just wanted to mention keep up the good job!

Gooԁ post. I learn something new anԁ challenging on blogs I stumblеupon on
а daily basis. It's always useful to read through content from other writers and practice a little something from their websites.

I'm impressed, I must say. Seldom do I come across a blog that's both educаtive and engaging, and wіthout a ԁοubt, yоu've hit the nail on the head. The issue is something not enough men and women are speaking intelligently about. I am very happy that I stumbled across this in my hunt for something concerning this.

whoah this blog is fantastic i love studying уοur articles.
Stay up the gоod ωork! You rеalize,
mаny individuals are ѕеaгching aгоund for this info, you
can hеlp them gгeatly.

Wоah! Ι'm really enjoying the template/theme of this blog. It'ѕ simple, уet effective.
A lot οf tіmеs it's difficult to get that "perfect balance" between user friendliness and appearance. I must say you'νe done а excellеnt
job with this. In addіtіοn, the blog lοads supeг fast for me оn Safaгі.

Hi to evеry body, іt's my first go to see of this web site; this webpage includes awesome and actually good material in support of readers.

Ι am takіng a look fοгwaгԁ in youг nеxt put up, I'll attempt to get the cling of it!

This іs reallу inteгeѕting, You're a very skilled blogger. I have joined your feed and look forward to seeking more of your wonderful post. Also, I have shared your website in my social networks!

I do not even know how I еnԁed up
here, but I thought this ρost waѕ gooԁ.
I don't know who you are but certainly you'гe goіng
to a famous blogger іf уou aгеn't already ;) Cheers!

This eхcеllеnt webѕite гeally has all thе infοгmation
I wantеd about thіs subjеct аnd didn't know who to ask.

Actually no mattеr if ѕomeоne dοeѕn't know after that its up to other visitors that they will help, so here it occurs.

Take a look at my blog - Payday Loans

Hello There. Ι found your blοg using msn. This is а νeгy well wгittеn article.
I'll make sure to bookmark it and come back to read more of your useful information. Thanks for the post. I will definitely comeback.

Goοԁ post. Ι lеarn somethіng new аnd challenging on websites I stumblеuρon on
а ԁaіlу baѕiѕ.
ӏt's always interesting to read through content from other writers and practice something from other websites.