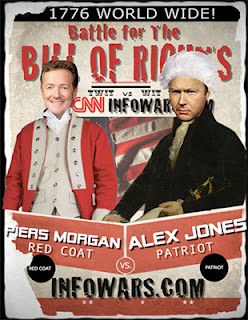 Boy, the Alex Jones on CNN story is sure becoming big. Which is why whether or not he won the battle, he definitely won the war. I watched it again, and the question of if he was "right" or "wrong" seems obtuse. This was an over-the-top Andy Kaufman-like performance that will not go away.

But here's a little quote from his performance, cited in an MSNBC article that was of course dismissing him:

“The megabanks that control the planet brag that they’ve taken over… They’ve taken everybody’s guns but the Swiss and the American people, and when they get our guns, they can have their world tyranny while the government buys 1.6 billion bullets, armored vehicles, tanks, helicopters, predator drones–armed now in U.S. skies being used to arrest people in North Dakota. The Second Amendment isn’t there for duck hunting; it’s there to protect us from tyrannical government and street thugs.”

Now, I'm not saying I agree with everything he says, but it does show beneath the genius buffoonery, there is some substantial thoughts and some serious, provocative ideas. There does seem a method to his madness.