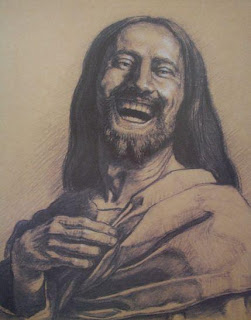 An Excerpt from "Happy Trails To High Weirdness"
Adam Gorightly on Monday, December 24, 2012

It was in Ojai, California, around 1980—as my friend Badkins and I were cruising around in the fabled Badkinsmobile—where I beheld our Lord and Savoir, Jesus the Nazereno.

Passing by a park, I saw this long haired bearded guy in a white flowing robe, who as he saw us passing by in the Badkinsmobile, acknowledged my presence by smiling beatifically and beckoning me and Badkins over to him with a wave of his holy hand. "Come and join me, my children," his messianic countenance read, an aura of mystical golden light hovering over his head like a heavenly crown of glory.

"Right. A permanent-press Jesus. He looks like he just got his robe out of the cleaners."

I waved goodbye to Jesus, as Badkins opted not to stop.

"Check it out," I said to Badkins, as we were rollin' down the road, heading for Ventura. "Just suspend your beliefs for one moment, and consider this: Now, if that really was the second coming of our beloved Lord and Savoir back there in the park, don't you think he would possess the power to surround himself with a mystical force that would forever keep his garments cleaned and pressed? Think about it."

Badkins snickered cynically and cranked up Animals by Pink Floyd.

This mystical encounter occurred almost 30 years ago, and ever since that day, Badkins wishes he had stopped to talk with Jesus in the park, thinking, in retrospect, that he might very well indeed have turned his back on the Second Coming of Christ.