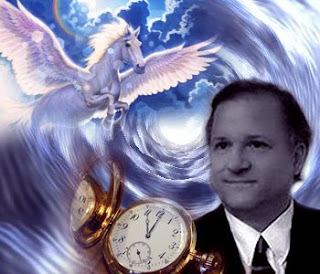 Project Pegasus is a quest begun in 1968 by Andrew D. Basiago when he was serving as a child participant in the US time-space exploration program, Project Pegasus.

Project Pegasus was the classified, defense-related research and development program under the Defense Advanced Research Projects Agency (DARPA) in which the US defense-technical community achieved time travel on behalf of the US government -- the real Philadelphia Experiment.

Project Pegasus was launched by the US government to perform "remote sensing in time" so that reliable information about past and future events could be provided to the US President, intelligence community, and military.

It was expected that the 140 American schoolchildren secretly enrolled in Project Pegasus would continue to be involved in time travel when they grew up and went on to serve as America's first generation of "chrononauts."

The children found, however, that in the process of serving as child time travelers attached to Project Pegasus, they became America's time-space pioneers.

Andy was the first American child to teleport and one of America’s early time-space explorers, as will be told in his soon-to-be-published book, Once Upon a Time in the Time Stream:  My Adventures in Project Pegasus at the Dawn of the Time-Space Age.

In 1968, he resolved to one day tell the true story of his time travel experiences in Project Pegasus and reveal to the world that the US government had made secret a teleportation technology that if made public would revolutionize transportation across the face of our planet.

Today, Andy serves as the Team Leader of the new Project Pegasus, the only group in the world that is lobbying the US government to declassify its time travel secrets.

Under Andy's leadership, the mission of today's Project Pegasus is to lead the campaign in law, politics, and culture to urge the US government to disclose its teleportation capability, so that this revolutionary technology can be used to advantage humanity in the 21st century.

Andy envisions a world in which teleports will replace airports for "real time" transit between major transport hubs around the world, thereby making long-distance travel faster, easier, safer, and cheaper.

The declassification and deployment of the US government's teleportation capability may also be the most important environmental cause of our time, for it will prevent billions of tons of pollutants from conventional transport from entering the atmosphere every year.

Project Pegasus invites you to join Andy in his heroic quest to usher in the Time-Space Age. Together, we can transform life on Earth. Let's go for it!

Email ThisBlogThis!Share to TwitterShare to FacebookShare to Pinterest
Labels: DARPA