The wheels of justice turn slowly, but they do grind fine and this is what many investors who were allegedly hustled by self proclaimed psychic Sean David Morton are hoping for.

On December 20th, 2012, United States District Judge Katherine B. Forrest ordered both Sean David Morton and his wife, Melissa Ann Morton, to stand ready for what appears to be a possible trial. Someone named John Woodie who is listed as an agent of the Mortons is also commanded to appear.  The mandatory appearance is set to take place on February 11, 2013 at 1PM.

The order, which can be read right here, clearly states that if The Mortons do not appear that a summary judgement will be entered against them and the4 Securities & Exchange Commission will likely be granted several items they've asked for, including that The Morton disgorge all of their ill-gotten gains from the alleged scam.

Through his newsletter, radio interviews, and workshops, Sean David Morton boasted of using his alleged psychic abilities to predict the stock market and make millions.  After forming an investment portfolio of nearly $6,000,000.00, The SEC began investigating what they allege were staggering losses of funds, misappropriation of funds, falsified investment data, and the failing of Sean David Morton to ever accurately predict the stock market as he claimed.

The case has dragged on since March 2010 after The Mortons filed a barrage of rambling and disjointed legal filings claiming that they were sovereign citizens of the "California Bear Flag Republic" and therefor were not subject to the federal court.

In addition the the charges of fraud, The Mortons have also been accused of judicial abuse, failing to appear at depositions, and dodging being served legal papers.

The SEC's original press release can be found here along with a copy of the complaint filed against The Mortons and other parties.

To see Rob Sterling's interview about Morton (as well as James "The Amazingly Randy" Randi: 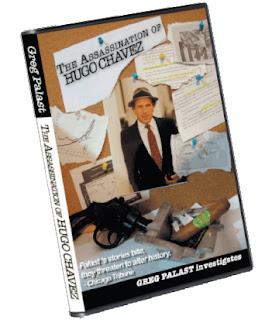 The Assassination of Hugo Chavez
http://www.gregpalast.com/chavezdownload/

As a purgative for the crappola fed to Americans about Hugo Chavez, my foundation is offering the film, The Assassination of Hugo Chavez, as a free download: taken from my several meetings with Chavez and his would-be assassins, based on my reports for BBC Television and Harpers Magazine.

We are counting on you to voluntarily make a tax-deductible donation and keep our investigations alive.

Or, if you want, you can donate for a signed copy of the DVD. 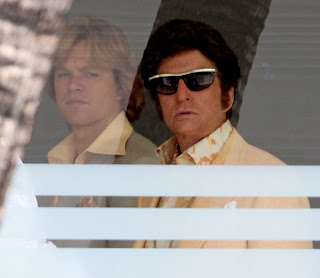 Michael Douglas as Liberace and Matt Damon as his live-in lover Scott Thorson in the HBO movie Behind the Candlebra, by Steven Soderbergh.

"We take the relationship seriously," Soderbergh says. "My feeling based on some of the research we did indicated that it was a real relationship and it was, at that point, the longest relationship Liberace had had. I was very anxious that we not make a caricature of either of the characters or the relationship. There’s no question that it’s unfortunate to see the movie through a contemporary lens and know that they weren’t able to be as open back then as people are today."

NEW YORK (AP) — Hockey is back, and it took nearly four months and one long night to get the game back on the ice.

With the season on the line, the NHL and the players’ association agreed on a tentative pact to end a 113-day lockout and save what was left of a fractured schedule.

Commissioner Gary Bettman and union executive director Donald Fehr ceased being adversaries and announced the deal while standing side by side near a wall toward the back of the negotiating room and showing a tinge of weariness.

“I want to thank Don Fehr,” Bettman said. “We went through a tough period, but it’s good to be at this point.”

A marathon negotiating session that lasted more than 16 hours, stretching from Saturday afternoon until just before dawn Sunday, produced a 10-year deal.

“We’ve got to dot a lot of Is and cross a lot of Ts,” Bettman said. “There’s still a lot of work to be done, but the basic details of the agreement have been agreed upon.”

Even players who turned into negotiators showed the strain of the long, difficult process.

“It was a battle,” said Winnipeg Jets defenseman Ron Hainsey, a key member of the union’s bargaining team. “Gary said a month ago it was a tough negotiation. That’s what it was.

“Players obviously would rather not have been here, but our focus now is to give the fans whatever it is – 48 games, 50 games – the most exciting season we can. The mood has been nervous for a while. You want to be playing. You want to be done with this.”

The collective bargaining agreement must be ratified by a majority of the league’s 30 owners and the union’s membership of approximately 740 players.

“Hopefully within a very few days the fans can get back to watching people who are skating, not the two of us,” Fehr said.

All schedule issues, including the length of the season, still need to be worked out. The NHL has models for 50- and 48-game seasons.

The original estimate was regular-season games could begin about eight days after a deal was reached. It is believed that all games will be played within the two respective conferences, but that also hasn’t been decided.

The players have been locked out since Sept. 16, the day after the previous agreement expired. That deal came after an extended lockout that wiped out the entire 2004-05 season.

“Any process like this is difficult. It can be long,” Fehr said.

Time was clearly a factor, with the sides facing a deadline of Thursday or Friday to reach a deal that would allow for a 48-game season to start a week later. Bettman had said the league could not allow a season of fewer than 48 games per team.

All games through Jan. 14, along with the All-Star game and the New Year’s Day Winter Classic had already been canceled, claiming more than 50 percent of the original schedule.

Without an agreement, the NHL faced the embarrassment of losing two seasons due to a labor dispute, something that has never happened in another North American sports league. The 2004-05 season was lost while the sides negotiated hockey’s first salary cap.

Under the new CBA, free-agent contracts will have a maximum length of seven years, but clubs can go to eight years to re-sign their own players. Each side can opt out of the deal after eight years.

The pension plan was “the centerpiece of the deal for the players,” Hainsey said.

The actual language of the pension plan still has to be written, but Hainsey added there is nothing substantial that needs to be fixed.

All clubs must have a minimum payroll of $44 million.

The league had wanted next season’s cap to fall to $60 million, but agreed to an upper limit of $64.3 – the same amount as last season.

Inside individual player contracts, the salary can’t vary more than 35 percent year to year, and the final year can’t be more than 50 percent of the highest year.

A decision on whether NHL players will participate in the 2014 Olympics will be made apart from the CBA. While it is expected that players will take part, the IOC and the International Ice Hockey Federation will have discussions with the league and the union before the matter is settled.

After the sides stayed mostly apart for two days, following late-night talks that turned sour, federal mediator Scot Beckenbaugh worked virtually around the clock to get everyone back to the bargaining table.

This time it worked – early on the 113th day of the work stoppage.

George Cohen, the Federal Mediation and Conciliation Service director, called the deal “the successful culmination of a long and difficult road.”

“Of course, the agreement will pave the way for the professional players to return to the ice and for the owners to resume their business operations,” he said in a statement. “But the good news extends beyond the parties directly involved; fans throughout North America will have the opportunity to return to a favorite pastime and thousands of working men and women and small businesses will no longer be deprived of their livelihoods.”

Before the sides ever came to an understanding regarding a 50-50 split of hockey-related revenues, the NHL first tried to cut the players’ share from 57 percent to 46 percent.

A series of talks in the first couple of weeks of September don’t bring the sides any closer, and the board of governors gave Bettman the authority to lock out the players at midnight on Sept. 15.

There was optimism about an end for the lockout when the sides held talks in New York on Dec. 5-6. The roller coaster took the participants and the fans on an up-and-down thrill ride that ended in major disappointment.

Fehr painted a picture that the sides were close to a deal, and Bettman chastised him for getting people’s hopes up. Negotiations broke off, and the NHL announced it was pulling all offers off the table.

It wasn’t until Beckenbaugh’s determined effort in the final two days of the prolonged negotiations that the sides finally found common ground.

“We were making progress continually and to make a deal you have to continue to make progress until it’s over,” Hainsey said. “That finally happened today.”

Screenwriter David Goyer has quite a career. He first broke through with his scripts for Dark City and the big screen adaptation of Blade.

Then he helped resurrect the Dark Knight with Batman Begins. (He also has story credit on The Dark Knight and The Dark Knight Rises.) Recently, Goyer penned the script for Call of Duty: Black Ops II, as well as the upcoming Superman reboot, Man of Steel. (Goyer also did some script work on the Godzilla reboot as well, which is due in 2014).

In addition to all this action, Goyer has a new show on Starz, Da Vinci’s Demons, which debuts on April 12. As Goyer points out, there’s definite similarities between the great artist and Batman. He told the L.A. Times that Demons has "a graphic novel approach. It’s photographically very different than any other historical show."

As for the Batman comparisons, Goyer told The Wrap, "There are some parallels to Batman. He had big father issues – missing parent. Both had these kind of formative, horrific incidents where they were trapped in caves…" An even more interesting parallel: Bob Kane apparently based Batman’s cape on Da Vinci’s glider. "So the two figures have always been kind of inextricably linked."

Goyer also said that Demons is the "Batman Begins of historical drama," as well as "one-third Indiana Jones, one-third Sherlock, one-third Tony Stark. There’s a lot of Lost in there, it’s got a heavy mythology….He’s kind of superhero-y. People have said that aside from Christ he’s the most recognized historical figure in the world. So in that regard my approach was not dissimilar to adapting Batman or Superman."

Sounds good Goyer, we’re sold. If this is how he pitched Da Vinci’s demons to the Starz network, it’s a very interesting way to re-approach history. And if the show’s ultra modern approach can turn young, impressionable people on to Da Vinci’s genius, even better.