It's Official: Paranoia Magazine out! 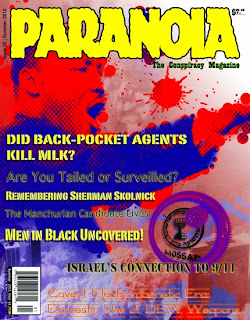 After an almost three year hiatus, Paranoia magazine has been revived from dormancy in hard copy print, with a sizzling Summer 2012 issue. This insightful and cutting edge publication is loaded with mind blowing articles, written by insiders and experts. It covers an infinite range of topics, including para-politics, alternative history, conspiracies, the paranormal and more!

Paranoia can be purchased at a reasonable subscription price of $28 (4 issues, annually). PayPal, Visa, MasterCard, Money Orders, or Cashier’s Checks are gladly accepted. Go to http://www.paranoiamagazine.com/subscriptions and order the best damn conspiracy magazine on the planet!

Here’s a letter from Paranoia Magazine’s editor, Elana Freeland:As things literally heat up in 2012—an election amidst solar storms and planetary alignments, a global financial meltdown amidst shifting consciousness—Paranoia magazine returns with what the Mockingbird media avoids at all costs.

Richard Spence, professor of History at the University of Idaho and author of Secret Agent 666: Aleister Crowley, British Intelligence and the Occult (Feral House, 2008), delights us with “Searching for James Shelby Downard,” the magister survivor of early 20th century Freemason persecution who strove to prepare us to discern their wily hoodwinking in the 21st century.

In “9/11 & Israel’s Nexus of Terror,” Navid Kahn sees that like 2001, the year 2012 also has “occultic, esoteric, and kabbalistic significance” and ponders yet more sinister “world theatrics” in Chicago with a new (Mossad asset) mayor, or in London, city of the 2012 Olympic Games.

Adam Gorightly continues the “skullduggery and mindphuckery” theme by examining “paranormal-conspiratorial-doppelgänger phenomena” from Lee Harvey Oswald to Kenn Thomas (also in this issue)—including the sighting of his own double at a late 1990s East Coast New Age conference.

And speaking of Aleister Crowley and London, we’ve included a peek into London’s Mystical Legacy by Toyne Newton & Jonathan Tapsell, due out on Illuminati Day, May1, 2012 (Salamander and Sons). Madeline Montalban (1910-1982), ceremonial magick student of The Beast himself, held positions of influence throughout the 1930s and 1940s, from private astrologer/secretary to the late Lord Louis Mountbatten (Prince Charles’ uncle), to scribe for Gerald Gardner, modern father of Wicca. Given that spell-casters have played into the politics of war as much as military tacticians and spies, what if Madame Montalban had something to do with Hitler’s abandonment of Operation Sea Lion for an ill-fated invasion of Russia?

In his article “Mothman, JFK, UFO, MIB, and Me,” Andy Colvin returns to the late 1960s when the legendary Fortean researchers Gray Barker and John Keel came to his neighborhood in the Kanawha Valley of the Ohio River basin to investigate the unusual creatures and craft people were seeing. Colvin ties the ancient past of mound sites and earthworks derived from the same mathematics Stonehenge and the Great Pyramid drew on to Mothman’s recent haunts, including Union Carbide’s Blaine Island plant on a U.S. Naval Reservation, now operated jointly by Bayer and Dow Chemical. Were the sightings hoodwinks to cover for something else going on?

“Who are the Men in Black, Really?” by Olav Phillips examines various MIB theories, from cultural constructs to tolpas to CIA and NASA weirdos, until Phillips guides us to, “There is only one organization, and it is a shadowy one, that fulfills all the prerequisites for Men in Black.”

Iona Miller’s “Did COINTELPRO & CIA ‘Back Pocket Agents’ Kill Rev. King, Jr.?” echoes Downard’s diagnosis of the American political landscape when she reexamines the murder of one of the Three Kings and says, “Manipulation of the public collective unconscious constitutes Masonic hoodwinking at its best or worst. Whether you think in terms of a shadow government or a government Shadow, we all share responsibility for allowing shadow masters who get away with murder, dreaming mind or no dreaming mind.”

In his column “Profiles in Parapolitical Research,” Kenn Thomas features two researchers. For current work, he extols David Talbot of salon.com, whose book and to-be film Brother: The Hidden History of the Kennedy Years looks at the military’s overriding role in the brutal murders of the other two of the Three Kings, the  Kennedy brothers, “twin traumas that set the country on a course of violence and greed from which we continue to suffer today.” As for the researcher of great historic significance, Thomas extols Sherman Skolnick, a legend in the parapolitical underground who, as Thomas points out, “is often portrayed by the general media as just another conspiracy nut job.” (Skolnick died May 21, 2006.)

Past co-editor of Paranoia magazine and past editor of HunterGatheress Journal Joan d’Arc weighs in with “The Manchurian Candidate Lives,” an extremely important revisiting of the CIA’s MK-ULTRA program and its ongoing relationship (60 years later!) with the false memory syndrome movement and military-corporate-secret society cover-up.

And finally a primer by yours truly on the 21st century “non-lethal” technology of your worst nightmare, “This Covert Electromagnetic Era: Domestic Use of Directed Energy Weapons for Political Control.”

Paranoia magazine lives! May your repast give birth to a thousand transformative questions in preparation for the awakening consciousness of 2012.

Email ThisBlogThis!Share to TwitterShare to FacebookShare to Pinterest
Labels: Paranoia