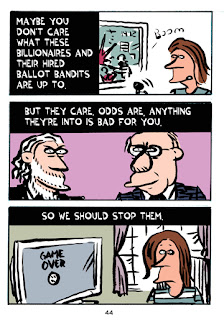 Greg Palast's brand new book Billionaires & Ballot Bandits: How to Steal an Election in 9 Easy Steps, is out.  To read more about it, go to GregPalast.com, or visit The Konformist Blog at:

On Friday, Governor Mitt Romney had breakfast with billionaires.

JOHN PAULSON, Paul Singer and Ken Langone who have dropped more than a million dollars each into the Romney “Super-PAC” Restore Our Future. As Butch said to Sundance, “Who ARE these guys?”

Singer's known as "The Vulture" on Wall Street. Langone's database company came up with the list of innocent Black voters that Katherine Harris wiped off the voter rolls of Florida in 2000. But who is Paulson, a guy so dark and devious he doesn't even have a nick-name?

I tried to join them ("Sorry, sir") just to ask why Romney was chowing down with the nation's most notorious billionaires and ballot bandits.

Here is just a bit about Breakfast Billionaire #3: John Paulson from my new book, Billionaires & Ballot Bandits: How to Steal an Election in 9 Easy Steps—An investigation of Karl Rove, the Koch Gang and their Buck-Buddies. There's a comic book inside by Ted Rall with an introduction by Bobby Kennedy Jr. Get it here now.

It was just released today and already hit number one non-fiction PAPERBACK in the USA.

In August 2007, billionaire John Paulson walked into Goldman Sachs, the investment bank, with a billion-dollar idea. Paulson’s brainstorm had all the elements that Goldman found enchanting: a bit of fraud, a bit of flimflam, and lots and lots of the ultimate drug: OPM—Other Peoples’ Money.

Paulson’s scheme was simple. Paulson, a much followed hotshot hedge-fund manager, would announce that he was betting big on the recovery of the U.S. housing market. He was willing to personally insure that billions of dollars of shaky subprime mortgages, like the ones dumped on Detroit, would never go into default.

Now, all Goldman had to do was line up some suckers with more money than sense, some big European banks that handled public pension funds, and get them to put up several billion dollars to join with Paulson to insure these shaky mortgages. Paulson, to lure the “marks” into betting the billions, would pretend to put $200 million into the investment himself.

But, in fact, Paulson would be betting against those very mortgages. Paulson himself was the secret beneficiary of the “insurance” on the mortgages. When the housing market went bust, Paulson collected from the duped banks and they didn't even know it.

And Goldman would get a $15 million fee, or more, for lining up the sheep for the fleecing.

Goldman provided Paulson with a twenty-nineyear old kid, a French neophyte, to play the shill, making presentations to the European buyers with a fancy, 28-page “flip-book” about the wonderful, secure set of home mortgages the “clients” would be buying.

The young punk that Goldman put on the case texted a friend (in French — mais oui! —about the inscrutable “monstruosités”) while he was in the meeting, right as Paulson was laying on the bullshit.

The carefully selected bag of sick mortgages was packaged up into bundles totaling several billion dollars. To paint this turd gold, Paulson and Goldman brought in the well-respected risk-management arm of ACA Capital. Paulson personally met with ACA and gave them jive that he himself was investing in the insurance (as opposed to investing against the insurance).

Secretly, Paulson personally designed the package of mortgages to load it up heavily with losers, concentrating on adjustable rate mortgages, given to those with low credit scores, while culling out high-quality loans given by West Coast banker Wells Fargo. ACA, thinking Paulson was helping them pick the good stuff, put their valuable seal of approval on the mortgage packages, though they were quite nervous about their “reputation.” (But that’s what happens when you go out with bad boys.)

The mortgages in each package were dripping dreck—but with the ACA/Goldman stamp, Moody’s and Standard & Poors gave the insurance policies a AAA rating. European banks that hold government pension investments snapped up the AAA-rated junk.

In August 2008, over one million foreclosures resulted in the Goldman mortgage securities losing 99% of their value. The Royal Bank of Scotland, left holding the bag, wrote a check to Goldman Sachs for just short of one billion ($840,909,090). Goldman did the honorable thing . . . and turned over the money to Paulson (after taking their slice).

Don’t worry about the Royal Bank of Scotland. The British taxpayers and Bank of England covered its loss, taking over the bleeding bank.

And here’s the brilliance of it: when it came out that Goldman and other mortgage-backed securities were simply hot steaming piles of manure, their value plummeted further and the mortgage market, already wounded, now collapsed—and mortgage defaults accelerated nationwide. The result was that as the market plummeted, Paulson’s profits skyrocketed: his hedge fund pulled in $3.5 billion and Paulson put over a billion of it in his own pocket.

With Paulson skinning some of Europe’s leading banks for billions, there was a bit of a diplomatic and legal dustup. The SEC investigated, confirmed in detail Paulson’s scam and sued the kid at Goldman who acted as Paulson’s assistant, the one who couldn’t even follow the complex deal. Goldman paid a fine, but never admitted wrongdoing.

Robert Pratt, a UAW member I met in Detroit, and several million others, lost their homes, including a Saudi prince who, in the recession, had to sell his Vail, Colorado, home ... to Paulson for just $45 million.

But now the bandit billionaire had a bit of problem. With $3.5 billion of ill-gotten lucre in his pocket, he needed something else in his pocket: politicians who would protect the tax dodge and keep the SEC enforcement dogs on a tight leash. Paulson wasn’t alone in profiteering from the savaging of the mortgage market. There was his billionaire buddy Paul Singer, known on Wall Street as “The Vulture.” Together they launched the super-PAC "Restore Our Future" with a check for one million each. They asked Bill Koch to throw in some change. Koch did: $2 million.

To restore the billionaires' future, the super-PAC's first order of business was to ally with Karl Rove. "Turdblossom," as George Bush called his mastermind Rove, had created a massive database on Americans, “DataTrust,” which works with a second massive database, “Themis,” funded by two other Koch Brothers, Charles and David. But that's another story in another chapter, read it, in Billionaires & Ballot Bandits.

Or donate and get a signed copy of the book.