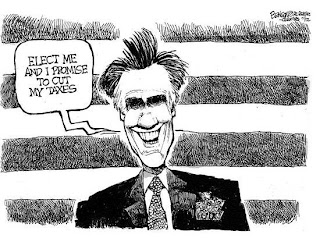 The Presidential campaign now seems to hinge on whether the financing of Medicare and Social Security is going to kill the American economy. It is not. This is a faux issue being pushed by radical Republicans who want to eliminate these two programs altogether.

The Social Security trust fund has more than $2.7 trillion of assets and Medicare's trust fun has $244 billion. No other federal programs have such large reserves to finance future operations.

In their 2012 Annual Report, the Social Security System's Board of Trustees reported that the "dollar level of the combined trust funds (OASDA and DI) declines beginning in 2021 until assets are exhausted in 2033."

Yes, the Social Security System is fully funded for another 21 years. Even if no changes are made between now and then, the System will provide 75 percent of benefits to recipients for an additional 50 years. This is hardly a financial crisis.

The Trustees also reported that Medicare is fully funded until 2024 -- that is another 12 years.

Small painless steps, such as increasing the cap on wages taxed to fund Social Security, can extend its surpluses until the last part of the 21st Century -- for us, our children and children's children.

Shifting U.S. health care to a single pay medical system, such as Israel's, which Mitt Romney found so outstanding during his recent trip there, could cut medical costs from the present 16 percent of the U.S. Gross Domestic Product to 8 percent and provide even better care. That would create more than $1 trillion of annual savings alone.

What is particularly striking about all this is that even as the GOP ticket and their surrogates are making these specious arguments, our infrastructure is falling apart because of underinvestment. Cities and states are firing hundreds of thousands of teachers, firemen and police, because they have too little money. More than 25 million American workers who want a job remain out of work. Apparently, these are not crises that merit the candidates' or the nation's immediate attention.

The real crisis, according to Mitt Romney, Paul Ryan and the Republican Party is the financing of Social Security and Medicare. To "save" Medicare, Ryan's plan advocates creating a voucher program for those 55 years old and under. To "save" Social Security, they want to privatize it. Subtly, they are even implying that these two programs are the source of the present federal budget deficit of $1 trillion annually.

The true goal of these Republicans is to use the current fiscal crisis as a Trojan horse to gut both these programs. Our federal budget deficits exist because of lost revenues created by the Bush tax cuts, the two wars that are being financed by more debt, and the economic collapse created by federal deregulation of banks and Wall Street. Therein lies the real solution.

Simply put, both the Republicans and Democrats are filling the presidential and Congressional campaigns with noxious lies.

But of all these lies, the Ryan Budget's attack on Medicare and Social Security is the greatest and of the most consequence.