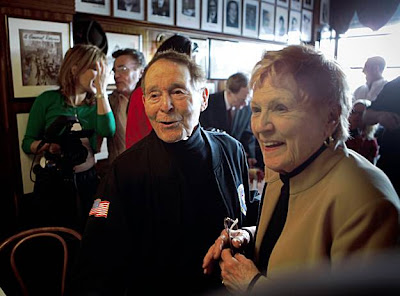 Bad food and sloth ooze over our planet like hot fudge mixed with giblet gravy. Fast food speeds us to our doublewide coffins, and we gave up exercise when watches started winding themselves.

But the battle to deliver mankind from its bad habits rages. Leading the charge, as he has for 80 years, is the Bay Area's gift to world health, Jack LaLanne.

He's 95, in fabulous shape although no longer the slab of muscle who inspired a nation via his daily exercise TV program. The brain is still cooking, and that's always been LaLanne's most effective tool.

Jack's wife, Elaine, says she fell in love with him a half century ago not for his muscles.

"And he's sittin' on it," LaLanne whispers, squeezing the biceps of an interviewer, who suddenly regrets skipping his morning push-ups.

The LaLannes were in town Wednesday for a party in honor of Jack's 95th birthday, at John's Grill, where the Jack LaLanne Salad never goes off the menu.

They're a team, Jack and Elaine. When the subject of doughnuts comes up, Elaine says, "Jack, tell him what the healthiest part of the doughnut is."

When the interviewer mentions that he watched LaLanne's TV show in the '50s, because his mom tuned in daily, LaLanne gives the interviewer's biceps another firm squeeze and confides, "I spent a lot of time on the floor with your mother."

But seriously, folks. Beneath the jokes and whimsy is a man as serious as a heart attack mixed with a stroke. He'll make you smile, but he'll also grab you by the arm, and by the head and the heart, and lead you to a better life.

LaLanne has made a fortune, but he won't retire. He carries on his crusade with the zeal of a man whose jumpsuit is on fire.

"If you believe something, live it!" LaLanne barks.

He recently wrapped up a tour promoting his 11th book, "Live Young Forever: 12 Steps to Optimum Health, Fitness & Longevity." One reason to trust what the man preaches: He has seen the dark side.

LaLanne at 15 was "a miserable goddamn kid. It was like hell." He was a sugarholic, gorging on sweets then barfing to make room for more. He was constantly sick, underweight, had zero energy, headaches so bad he would bang his head against a wall. He had an explosive temper, severe depression and a head full of demons when he dropped out of Berkeley High.

Then a neighbor gave Jack and his mother tickets to a lecture by clean-eating advocate Paul Bragg. Boom! Jack LaLanne was born.

Says LaLanne, "Bragg said, 'My dear friends, it matters not what your physical condition is. If you obey nature's laws, you will be born again.' I went home and prayed, 'Dear God, give me the willpower to refrain from those foods that are killing me.' "

Soon LaLanne was healthy beyond his dreams. He became a football star, a wrestling champ and a babe magnet. At 22, he opened a gym in downtown Oakland, and when business didn't boom - maybe because in 1936 nobody knew what the hell a gym was - he told himself, "Jack, people are not coming to you. You gotta go to them!"

He trained cops and firefighters, he recruited at high schools, and in 1951, he began hosting a daily exercise show on KGO (Channel 7) - where he met Elaine - that became a network smash, running until 1985.

Using his personality and pep - with his muscles serving as his background singers - he bullied a nation into rethinking its nonapproach to nutrition and exercise. He invented and pioneered the fitness industry.

Now Jack and Elaine sell their juicers on infomercials, the book is out, and he's still preaching the gospel. The seeming futility of shaping up the world does not daunt him.

Still working out
One thing he can always improve is himself. LaLanne works out two hours a day, mostly swimming and lifting weights, at the LaLanne mansion on the Central Coast.

"I work at living," he says, leaning close and squeezing an arm. "Most people work at dying. Dying's easy."

One of LaLanne's most effective sales devices has been his amazing feats of strength. When Arnold Schwarzenegger came to America in 1968 and became an instant sensation on the Southern California muscle scene, LaLanne challenged the kid to a duel at Muscle Beach. The Austrian Oak was 21; the Oakland Oak was 54.

"I beat him in chin-ups and push-ups," LaLanne says. "He said, 'That Jack LaLanne's an animal! I was sore for four days. I couldn't lift my arms!' "

"What feat are you going to do this year?" Elaine asks, lobbing another softball to her slugger hubby.

"I'm going to tow Elaine across the bathtub!"

The gym/spa: In 1936, he opened the Jack LaLanne Physical Culture Studio at 409 15th St. in Oakland, the first modern gym. He eventually sold his chain of studios to Bally.

Mind-body fusion: Now it's a popular concept. "You can't separate the mind and body," he says.

Exercise machines: The kind with cables, pulleys and weight selectors. LaLanne didn't patent them, but he invented them, including the first leg-extension machine.

Muscles on women: Before LaLanne's TV show, a woman's only workout was behind a vacuum cleaner.

Muscles on athletes: LaLanne helped dispel the "muscle-bound" myth. He was a fine athlete and a 4-handicap golfer.

Yoga: He has never called it that, but from the beginning he preached the importance of stretching.

The other day I was reading his biography, it is very interesting to know all the things he did back then.
sv77

Your means of describing the whole thing in this post
is actually nice, all can simply know it, Thanks a lot.