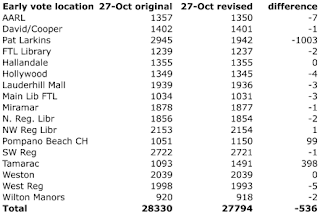 Broward is a Democratic stronghold that Barack Obama is expected to carry by a large margin. But initial early vote totals reported by the office of the Broward Supervisor of Elections changed on Sunday, in some cases dramatically, causing some to question the numbers.

An analysis of the unofficial totals by early voting location on the Broward Supervisor of Elections website from Saturday, compared to the tallies posted on Sunday, shows that in one location, the E. Pat Larkins Community Center, located on Martin Luther King Blvd. in Pompano Beach, the revised totals showed 1,003 fewer votes. The initial tally reported from the polling place in the heavily black neighborhood showed 2,945 votes, but the revised tally was 1,401. Across the 17 Broward polling locations, 15 saw their vote totals revised, mostly by minute amounts of between 1 and 7 votes. But the three more significant changes, including the addition of 398 votes in Tamarac (a racially mixed community) and adding 99 votes to the totals from Pompano Beach City Hall, whose demographic is majority white.

The revisions mean that 536 fewer total votes were reported in Broward — a reduction from 28,330 votes to 27,794 votes. That could be significant in a close election in a state where the presidential contest was decided by just 538 votes in 2000.

“There could be a very simple explanation. I have no idea,” said David Brown, a political consultant who is working for three Broward candidates, and who downloaded the Sunday early vote totals Sunday morning, only to be asked later by a colleague for the numbers, which he retrieved from his phone. When he looked at the revised totals, the Pat Larkins number stood out. “Almost every one of the precincts changed,” Brown said. “Some by two or three, one by about 100. But the Pat Larkins Center, that’s more than a thousand votes. I’m curious why.”

Brown said that when he inquired about the numbers, he was told by the elections office that the changes had resulted from a “computer glitch.”

Broward SOE spokesperson Mary Cooney acknowledged that the Sunday totals were revised, and said she would look into why.

“I can’t tell you definitively now,” Cooney said, “but I queried the person who posts those numbers and the most significant number he told me he changed was an instance where 1050 should have been 1150 — the numbers were transposed.”

Cooney said that the process for posting election results is that one individual receives the data from the polling places, which call in their results when polls close. Then a second individual posts all of the results to the elections website.

Broward Supervisor of Elections Dr. Brenda Snipes could not be reached for comment.

Email ThisBlogThis!Share to TwitterShare to FacebookShare to Pinterest
Labels: Florida

For most up-to-date information you have to go to see
internet and on web I found this web page as a finest web site for newest updates.


Feel free to surf to my website :: diet plan to lose weight

Link exchange is nothing else but it is simply placing
the other person's blog link on your page at proper place and other person will also do same in support of you.