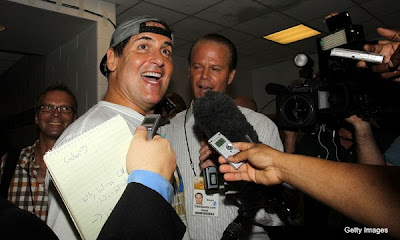 The victory of the Dallas Mavericks over the Miami Heat in the NBA finals has largely been portrayed as a deserved vindication of Dirk Nowitzki, and rightly so. But the one guy besides Dirk who probably deserves applaud is owner Mark Cuban, who has confirmed he is the coolest owner in sports since Eddie DeBartolo ruled San Francisco.

The Konformist isn't big on gushing over billionaires, and our position still is even the best owner is basically deadweight. But as far as deadweight billionaires go, Cuban is definitely a king of kings.

Haters say Cuban is obnoxious and arrogant. This is true. But he's the one owner who clearly is in sports not for the money but the love of sports. And two post-victory actions tell you what he is made of. One, he decided to cover the costs of the Maverick's victory parade rather than pawn it off to the cash-strapped metropolis. Two, perhaps more telling but less noticed, he left a $20K tip for the staff on a $90K bar tab on victory night. This was at a club in Miami, BTW, and not in Dallas.

Hopefully he will soon join the fraternities of owners in the NFL, MLB and NHL. Sports needs guys like him...