In Search Of: Switzerland's Best Fondue 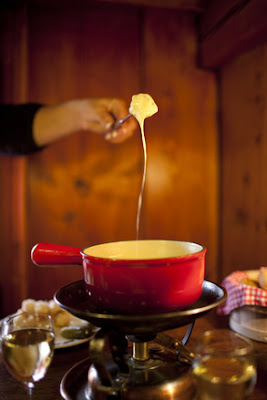 Size is not Switzerland's main asset. If the country were a U.S. state, it would rank 42nd in size, right between West Virginia and Maryland. The drive between its two biggest cities, Zurich in the northeast and Geneva in the southwest corner, takes just three picturesque hours, past church steeples, rolling green hills and thousands of long-lashed cows. Homogeneity doesn't rank high, either. A melting pot of cultures, Switzerland has 26 cantons and four languages jammed into its territory.

But there are symbols that unite the Swiss—chocolate, watches, geopolitical neutrality and an astronomically priced currency. Chiefly, however, there is fondue. Bread chunks dipped in a pot of hot cheese, served in army barracks and at Sunday family dinners, has literally been a national dish since the 1930s.

It's a pretty appealing dish to rally around—already excellent cheese turned to gooey, molten goodness over a burner or open flame. There's a low-stakes challenge in spearing bits of crusty bread on sticks and swirling them into the mixture without losing the bounty. It's one of the world's great communal meals.

"It is said that eating from the same caquelon—or fondue pot—establishes friendships," says Verena Lüthi, who runs the hillside chalet restaurant Auberge de Mont-Cornu, near Switzerland's northern border with France, with her husband

And while the Swiss eat it year-round, winter is a truly ideal time for fondue, whether you're just off the ski slopes or dining out in the city.

Fondue means "melted" in French. Ever since people began preserving milk as cheese thousands of years ago, they have been melting it, says Isabelle Raboud-Schüle, curator at the Musée Gruérien, a regional culture museum in the fondue-heartland town of Bulle in the Fribourg region. The first written recipes for dishes resembling modern fondue date back to 18th-century French and Belgian cookbooks, but they called for imported Gruyère cheese, she adds, thereby making fondue Swiss. (Two variations—chocolate fondue and beef fondue—are attributed to a Swiss chef in New York in the 1950s.)

In the 1930s, Switzerland wanted to promote cheese consumption at home. Through the distribution of fondue recipes, the Swiss Cheese Union advocated that the dish be eaten as often as possible, says Ms. Raboud-Schüle. It also happened to be a handy way to use up leftover scraps of bread and cheese.

Forget about that neutrality thing, though. Each region in Switzerland claims to have the best fondue formula based on local varieties of the two essential ingredients, cheese and wine, as well as other elements that get thrown in the mix. Around Fribourg, an area in western Switzerland that rises between two big lakes, I ate a pure Vacherin fondue, instead of the mix of cheeses that is common. As if a half pound of gooey cheese per person weren't rich enough, near Neuchâtel it was served with a mountain of fresh cream on top. In the Valais region, an arc that runs along the French and Italian borders and home to the Matterhorn, the local fondue variety calls for a tomato coulis.

The Gruyères version has become dominant in recent decades. Often referred to as a moitié-moitié, or half-and-half, it mixes Gruyère and Vacherin cheeses (not necessarily in a 50-50 proportion) with white wine and garlic. Though it's most common in the Fribourg region around the medieval town of Gruyères, the dish bubbles up in Geneva and Zurich, where transplants from Fribourg have set up shop.

Still, many chefs are playing with the classic formula. Christophe Demierre, who runs a molecular-cuisine cooking school from his home kitchen in the Fribourg region, makes fondue as a mousse and a powder that are meant to be eaten individually. "There's still a sense of sharing because it becomes a conversation topic," he says from his kitchen.

Carlo Crisci, who runs two-star Michelin restaurant Le Cerf, north of Lausanne, cooked a cold fondue of small cheese balls in a hot potato soup for a special event. But he doesn't serve his modern fondue at the restaurant. "You can't really serve fondue in an elegant restaurant" because of the smell, he says. Meanwhile, Hervé This, a molecular-gastronomy academic, recommends adding a pinch of citric acid to emulsify the ingredients in fondue—a step that traditionalists balk at.

As with any dish that has such cultural significance, there are plenty of rules that come with eating fondue. The Swiss only condone drinking white wine or hot tea with their melted cheese—anything else is said to create an indigestible ball of cheese in the stomach. (The most egregious offense is drinking Coke or beer, but even water is frowned upon, Ms. Raboud-Schüle says.) Purists don't approve of ordering a salad for some greens with all that dairy. But cured meats are okay. And whoever loses their bread in the fondue pot buys a round of drinks for the table.

After a few days of eating fondue in five Swiss cantons, I was ready to break all the rules. I wanted red wine. I wanted vegetables. But the upside was, I became a master at spotting standout fondue. Start with the bread: It should be crusty and flavorful. The cheese shouldn't be runny, but should envelop the bread. There should be a hint of wine in the mix, but the alcohol should not leave an aftertaste. Neither should the garlic.

The Tourist Treasure | Le Chalet
Fondue restaurants line the main cobblestone street in the medieval town of Gruyères, between Berne and Lausanne. Look to the top of the hill for Le Chalet and its quintessential wooden dining room. (Opt for the cozier upper floor, under the dark beams, rather than the lighter ground floor.) The moitié-moitié is a classic, served with potatoes and thick slices of bread. (At 29.50 francs, or about $30, it is also one of the most expensive, but that's the price of being a tourist.) Rue du Bourg, Gruyères, chalet-gruyeres.ch

The Crowd-Pleaser | Café Tivoli
Smack in the heart of fondue's Fribourg heartland, Café Tivoli is a favorite of local chefs. But this isn't hoity dining. Big groups gather around steaming caquelons for hearty fondue made with perfectly aged cheese. There isn't a menu offered in the wood-paneled dining room—you just chose between a moitié-moitié and a pure Vacherin. The latter is served warm, not hot—because the cheese is so rich, the oil separates from cream at high temperatures—and comes with potatoes for a dish that resembles raclette. Cafe Tivoli is currently in the hands of the fourth generation of the Colliard family—meaning they've been serving fondue for at least 80 years, going back to when Switzerland was first promoting it as a national dish. Place d'Armes 18, Châtel-St-Denis, cafetivoli.ch

The Urban Transplant | Fribourger Fondue Stübli
Denise Ernst, whose parents moved the family from Fribourg to the big city, set up her own restaurant in a gourmet ghetto of Zurich 36 years ago. Nearby, there are reputable pizza joints, high-end Italian restaurants and a Japanese noodle bar. For classic Swiss cuisine, try Ms. Ernst's moitié-moitié. Five cheeses go into it: two kinds of Gruyère and three kinds of Vacherin, ranging from young to aged, to get the right mix of flavors. For a sweet treat, ask for pears and pineapple to dip into the melted cheese. Rotwandstrasse 38, Zurich, fondue-stuben.ch

The Refined Rendition | Auberge de Mont-Cornu
This charming chalet in the hills above La Chaux-de-Fonds in northwestern Switzerland is straight out of "Heidi." The house fondue is nuanced, using three kinds of Neuchâtel cheese (Jura, Vacherin and Chaux d'Abel) topped with savory whipped cream and cracked black pepper. The restaurant, in the Luthi family's 400-year-old house, also serves local meats and Swiss specialties such as rosti, a fried potato pancake. If it's warm, you can have your fondue in the garden overlooking cow and horse pastures. Closed until April, 2012. Mont-Cornu 116, La Chaux-de-Fonds

The Neighborhood Joint | Au Vieux Carouge
Located in a neighborhood of gingerbread-like houses and gourmet stores on the outskirts of Geneva, Au Vieux Carouge was founded by a husband-and-wife transplant from Valais 28 years ago. It is what a diner is to hamburgers—a down-home spot filled with locals who crowd around orange caquelons. The menu makes some concessions to modern versions of fondue: The Marseillaise is spiced with herbs and the Neu-Neu has pasta mixed in. The tomato version—the owner's favorite—is made with a homemade coulis. Rue Jacques-Dalphin 27, Carouge, 22-342-6498

The Quirky Canteen | Buvette des Bains
This lakeside Geneva eatery is housed in a converted public bathhouse that dates to the 1930s, with wood-burning stoves to keep diners warm. Don't expect white tablecloths—here you order your fondue outside and leave your name. A few minutes later, someone will bring you a bubbling pot to one of the long communal tables. They use local sparkling white wine instead of still wine, but it's actually a pinch of baking soda that keeps the dish so fluffy. The tools are more basic than at most places—regular forks stand in for long fondue utensils—but the crowds don't seem to care. 30 quai du Mont-Blanc, Geneva, buvettedesbains.ch

Melting Pots
Where to find exceptional fondue around the U.S.

Swiss Chalet | Vail, Colo.
Where better to indulge in a pot of molten cheese than beside the wintry slopes of a ski resort—in this case, Sonnenalp Resort of Vail? Located in the heart of Vail Village, Swiss Chalet's Alpine-style décor and an array of old-style fondues and raclettes transport you straight across the Atlantic.
20 Vail Rd., sonnenalp.com

Café Select | New York
In the winter months, the grotto-like back room of Serge Becker's sceney Swiss eatery is dedicated to a special fondue menu featuring four different cheese versions, plus raclette. For a fresh take, try the South of the Alps fondue with fresh and sun-dried tomatoes and olives.
212 Lafayette St., cafeselectnyc.com

Geja's Café | Chicago
This Lincoln Park stalwart has been in business since 1965, and is well known to locals for its extensive wine list, dimly lit romantic ambience and the city's purported best fondue. Geja's serves just one, classic Gruyère fondue, available as a main meal or as a prelude to a hot oil fondue course featuring lobster, beef and a variety of other meats of your choosing.
340 W. Armitage Ave., gejascafe.com

Email ThisBlogThis!Share to TwitterShare to FacebookShare to Pinterest
Labels: Switzerland