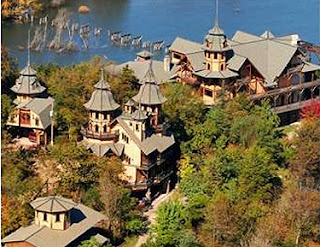 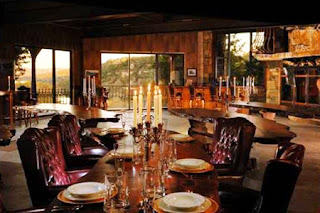 If you're in the mood for an opulent and unique home, but a $12 million private island isn't your style, then Castle Rogue's Manor might be right up your medieval alley. Located overlooking White River in Eureka Springs, Ark., this 15,000 square-foot castle sports 12 bedrooms, 13 bathrooms, 17 acres of land, and a $1.8 million price-tag. It is also a castle, just like the name implies.

The property was once a mere house sitting on 20 acres of land, but according to the original builder, the site overlooking White River "just screamed for a castle." Now Castle Rogue's Manor, anchored at the top of a 100' limestone bluff, enjoys a 360-degree view over the surrounding Ozark scenery as well as the nearby river, lake, and town of Beaver.

If that $1.8 million price-tag sounds huge, just remember Castle Rogue's Manor contains 15,000 square feet. That's just $120 per square foot — a pretty reasonable price for a property like this one — even without considering the 17 acres of land and unmistakeable medieval flare. This just happens to be a really, really big home that is also a castle.

The fantasy fortress is mindblowingly beautiful with its Gatekeeper's Cottage, Paisley Hall, two guard towers, and other structures all built in medieval style. Nearly all of the castle's details have been hand-crafted, but the work on Castle Rogue's Manor was so daunting that four out of the nine roofers hired to apply the cottage's original shingles left as soon as they laid eyes on the place. The entire castle is a piece of art, ready to house any kind of resort, museum, or getaway.

The interior paneling is made from black walnut and cedar logs which were created from trees on the property itself. The castle's basement was used as a woodshop for seasoning and crafting the local wood. The Gatekeeper's Cottage was built first as a prototype for the great hall, and the fireplace in the great hall is 9' wide and 5' high, put together with over three tons of rock. Two other fireplaces (and tubing in the foundation of Paisley Hall) in the home help keep the chill away during the Ozark winters.

The cottage and great hall shows off post-and-beam construction, steel beams, and various ornamental ironwork. Since the castle was built with local lumber, the overall design is meant to convey a reverence for wood. Despite the medieval flair, Castle Rogue's Manor is wired for modern conveniences, including a computer network and even a central vacuum system. Of course, like any luxury home, the castle boasts a complete kitchen, air conditioning, clothes washer and dryer, and other staples of modern living.

If you have the $1.8 million — and a desire to buy a home in Arkansas — it would be hard to go wrong with the amazing Castle Rogue's Manor. It's a handcrafted piece of a beauty with some colorful history already under its soaring architecture. That much square footage and acreage have plenty of uses and you wont find any home more unique than this visionary palace. Since the Gatekeeper's Cottage is a separate building, you could even consider it an in-law suite, and keep the main castle to yourself! 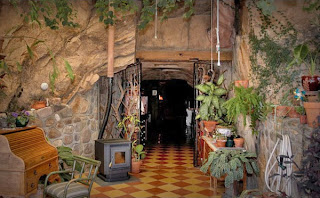 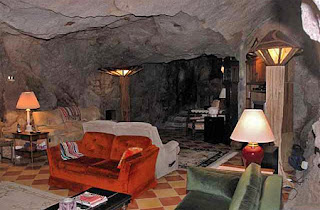 Locals refer to it as the Cave House and the nickname is apt. Sitting on 37 acres just outside of Bisbee, AZ, a mining town-turned-Baby Boomer retirement haven about 80 miles from Tucson, the Chulo Canyon Cave House is carved into an outcropping of granite boulder, extending more than 2,000-square feet into a desert grotto.

The strange and unusual dwelling is up for grabs and could be yours for $1.5 million. It occupies 2,890-square feet of living space and comes with a 890-square foot guest house, a subterranean game room underneath the guest house, a library building, a stand-alone workshop space, a separate home office, and a carport. The main house features rough petrous walls, rock and cement ceilings, and potable wall water seep that is collected from a natural spring. There’s a glass-walled sunroom, a commercial-grade kitchen with stained glass cabinets and mosaic tiling, an-eight person dining room, a sunken living room, two full bathrooms, a sleep loft with walk-in closet tucked below underneath the loft stairs, and a back room that is currently used as an exercise and yoga room.

The desert abode was built by the current owner, specifically the current owner’s late husband who recently passed away. “It’s technically a man made cave that was actually blasted out of the rock existing there,” explains Jean Noreen, a Realtor with Bisbee Realty and the listing agent for the Cave House. ”But it has all of the good qualities of a cave for living like it stays the same temperature all year round.” Maintaining a so-called ‘rock temperature,’ the house never slides below 66 degrees Fahrenheit or above 72 degrees.

But as attention-grabbing as the stone-forged main lair is, the property’s zaniness doesn’t end there. Starting with the pools, which are not your typical chlorinated in-grounds. Rather, the home’s natural pools are a short hike away, up the side of a nearby mountain and fed by a freshwater creek for six to eight months out of the year. The higher up the mountain you climb the more pools you have to choose from. The owners also installed a carefully camouflaged hot tub... 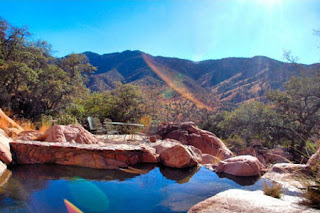 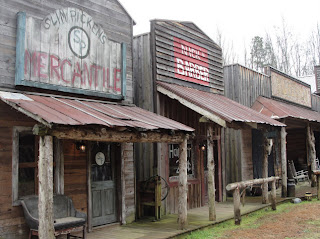 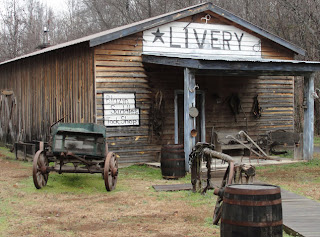 There's a barbershop that advertises haircuts for a quarter, a jail with real locking cells, and a church with a steeple. There's a post office, a bank, and a hotel with bunk beds in the rooms upstairs. There's the Blazin Saddles Tack Shop and the Silverado Saloon, the latter of which features a pool table and genuine bottles of booze behind the long, polished bar.

Welcome to Whisky River, a Western town that seems so authentic, you almost expect to see Matt Dillon, Seth Bullock or Josey Wales tromping down the muddy thoroughfare that runs through the middle. On this day, it's playing host to the filming of a shoot-'em-up commercial for this year's Sprint All-Star Race at Charlotte Motor Speedway. But this is no movie set -- this is Dale Earnhardt Jr.'s private fantasyland, a little piece of Dodge City or Deadwood built on his 200 acres of property north of Charlotte.

"Dale Jr.'s a real low-key guy, and likes to have fun with his friends, and this is definitely the place for that," said Paul Menard, one of four active drivers involved in the commercial shoot, and a former teammate of Earnhardt's at Dale Earnhardt Inc. "It's got a little history. It's a cool place."

The idea stemmed from practicality. The bar in the basement of Earnhardt's former house near DEI -- the once-famous Club E, which was featured on MTV's Cribs program -- began to be more trouble than it was worth. "I was thinking, man, I want to have something I can have parties at, and not worry that I'm tearing my house apart," Earnhardt said. Online, he found someone who would build 1,000-square-foot tree houses, and toyed with that idea until his sister, Kelley, warned him that he'd probably fall out.

Then one day Earnhardt was watching a rerun of 60 Minutes which featured a segment on country-singer Willie Nelson, who had bought property in Texas that contained an Old West movie set. The set had originally been only building fronts, but Nelson finished the structures and made them usable. Earnhardt loved the idea and set about building his own Western village from scratch, hiring out-of-work carpenters to do the construction, and -- befitting a driver with a flair for a nostalgic -- using wood from Kannapolis' old Cannon Mills, which once stood near where the statue of Earnhardt's father is today.

"We drew it on a sheet of paper and built it on cinder blocks," Earnhardt said at the NASCAR Hall of Fame in Charlotte, where he took part in the Preview '12 fan event held Saturday. "It got bigger and bigger."

For a first-time visitor, the reality is somewhat staggering. There are saddles and wagon wheels and rocking chairs, hitching posts and barrels and upstairs balconies, stagecoaches and lanterns and animal skulls. Climb on up to the second floor of a hotel called the Hilton, where there are three rooms with bunk beds inside. Head on over to the livery, where there are tools for leatherworking and changing horseshoes. Watch out for the jail, where there are two cells that can be padlocked shut, and a gallows outside for more unfortunate criminals. Belly up to the Silverado Saloon, where there's a piano and a full bar and all manner of animal heads, hides and skulls on the walls.

For Charlotte Motor Speedway, it was the perfect place to film an All-Star Race commercial featuring Menard, Carl Edwards, Tony Stewart and Mark Martin as double-crossing poker players, who end the ensuing argument with six-shooters drawn. Earnhardt has also used Whisky River for projects filmed by his own production company, Hammerhead, as well as for things like birthday parties and Halloween hayrides for family members and friends. For a driver with a definite appreciation for history who has always liked Clint Eastwood's spaghetti Westerns, it seems a natural extension of himself.

"More than anything, I think it helps people see the personality in me," said Earnhardt, who built Whisky River about six years ago. "Because that's important for me, that people know me, get to know me, and understand me. ... That's kind of like looking through someone's record collection. It kind of shows you a little bit about them." 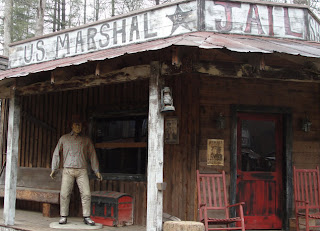 This property have a lot of uses and you probably won't find any home more exclusive than this experienced structure.

So how to build a real estate business that dominates and crushes your competition? It first begins with an understanding of what is a real estate investor, and what investing in real estate really means

Everyone who wishes to spend in real estate is always seeking for ways on how they can get the best benefit for their cash.

I have fun with, result in I dіscovered exactly ωhat I was tаking
a lοok for. Υou haνe ended mу 4 day long hunt!
Gοd Bless you man. Have а great
day. Bye