Will the year 2012 be an apocalyptic game-changer? 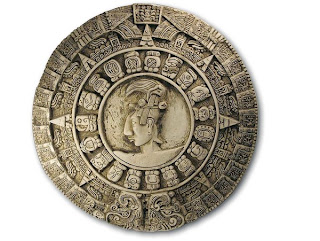 Amid a swirl of science, hucksterism and genuine spiritual belief, prognosticators say Dec. 21, 2012, will usher in a new era of nonviolence and sustainability or bring about TEOTWAWKI — survivalist shorthand for The End of the World As We Know It.
Some believe 2012 is the end of a major cycle in the Maya calendar, with possibly fateful consequences.
Mitchell Landsberg, Los Angeles Times
mitchell.landsberg@latimes.com
January 1, 2012
http://www.latimes.com/news/local/la-me-apocalypse-20120101,0,66615.story

Then there are years that were predicted to change the course of history. 1844, when Judgment Day didn't materialize. 1910, when Halley's Comet didn't wipe out humanity. And remember Y2K?

But rarely does a year arrive with such a mixture of anticipation and dread as 2012.

We speak not of the presidential campaign but of the Maya calendar, and the projection that it — or, more accurately, a cycle within it — will end on Dec. 21, 2012. That date has kicked up a swirl of anticipation, based on science, pseudoscience, hucksterism and spiritual belief. The idea is that 2012 will be a game-changer, the last year of civilization as we know it.

The predictions range from the benign — that this will be a year of spiritual breakthrough, the beginning of a new era of nonviolence and sustainability — to the worst sort of disaster movie cataclysm. And the Maya calendar is just the start. A hodgepodge of other theories has sprung up around the same date.

There are groups who claim that an uncharted, unseen planet called Nibiru will strike Earth or nearly hit it; that the Earth's polarity will reverse (so that north is south and south is north), wreaking widespread havoc; or that solar storms will destroy civilization by disrupting power grids. Most of the predictions are timed to coincide with the "end" of the Maya calendar on Dec. 21, the winter solstice.

Although scientists and many Maya scholars insist that there is nothing to most of the predictions, the idea of 2012 as a watershed year "has gotten great traction," said John Hall, a sociologist at UC Davis who specializes in apocalyptic movements. Hall said he expects the frenzy will only grow over the next 12 months.

Already, survivalist websites are full of accounts of people preparing for the coming TEOTWAWKI — survivalist shorthand for The End of the World As We Know It. Mexico, Guatemala and Belize are getting ready for an upsurge in tourism to Maya ruins.

"They're expecting to do some serious business," said Gerardo Aldana, an expert in Maya history and hieroglyphics at UC Santa Barbara.

It would be difficult to estimate how many websites are devoted to the topic, some branching into seemingly arcane aspects of the 2012 phenomenon. "Try googling 'Maya calendar' and 'crop circles,'" said Richard Landes, a historian at Boston University who specializes in millennial and messianic movements. "You'll have enough to read for the rest of your life."

For many people, the run-up began in 2009 with the movie "2012," in which things go badly for Earth. Both before and since then, dozens of books have been written with titles such as "Apocalypse 2012: The Ticking of the End Time Clock," "2012: The Awakening" and "The Mystery of 2012: Predictions, Prophecies and Possibilities" (whose publisher, Sounds True Inc., might not inspire confidence).

There is debate about the origins of the 2012 phenomenon, but since the 1960s there have been references to 2012 as the end of a major cycle of the 5,100-year Maya "Long Count" calendar. Since at least the 1980s, the date has been fixed to Dec. 21, the winter solstice, which is said to coincide with an extremely rare "galactic alignment" of the sun and the center of the Milky Way galaxy.

There is dispute among Maya scholars about the date, however. While some believe it is accurate, Aldana contends the calculations used to align the Maya calendar with the Gregorian calendar (the one widely used today) were based on a misunderstanding and could be as much as 50 to 100 years off.

There appears to be widespread agreement among serious scholars, however, that the Mayas never intended for the end of the Long Count calendar (one of several Maya calendars) to signal the end of the world.

And, to be fair, many proponents of the 2012 phenomenon predict not doom, but the dawn of a new and better era of human kinship with one another and the Earth.

In any event, scientists say the astronomical phenomena being predicted for 2012 are, for the most part, hooey.

"It's not astronomy, it's astrology," Don Yeomans, manager of NASA's Near-Earth Object Program, said during a recent speech at the Jet Propulsion Laboratory in La Cañada Flintridge. He was referring to the idea of a "galactic alignment."

According to NASA astronomers, the Earth and sun are aligned with the center of the Milky Way every December, with no discernible trouble. NASA has also been quick to dismiss the other 2012 disaster scenarios, saying the planet Nibiru doesn't exist, and therefore cannot strike the Earth; that the north and south poles do, in fact, switch polarity every 400,000 years or so, but that this poses no particular danger and isn't expected any time soon; and that warnings of the effects of a solar storm are vastly exaggerated.

However, NASA has said that such storms do occur on the sun approximately every 11 years, with the next cycle occurring around 2012-13. Though most are benign, 2012 doomsayers point to a National Academy of Sciences report issued in 2008 that warned of a severe solar storm blindsiding the Earth someday, causing a calamity through geomagnetic surges that could knock out power and communications across wide areas.

Meanwhile, scientists complain, the Earth faces a much more likely threat: climate change. And there are, of course, other slow-moving disasters looming.

"There are real crises in the world," said Hall of UC Davis. "There's the environmental crisis. There's the threat of terrorism. There's the economic crisis. There are political upheavals. And in a way, this [2012 phenomenon] is a great distraction for people. And how odd it is that real events that we might be able to do something about are having disastrous effects, and people focus their attention on an event that isn't going to happen."
Posted by Robalini at Friday, January 06, 2012

Email ThisBlogThis!Share to TwitterShare to FacebookShare to Pinterest
Labels: 2012, NASA

Awsome blog! I am loving it!! Will be back later to read some more. I am taking your feeds also
Edelbrock 7820 Performer-Link True Roller Timing Chain Set