What sort of ogre could look a smiling little girl in the eye and refuse her a cookie sale? Luckily for the Girl Scouts of America, it would appear that these monsters are few and far between. For nearly a century, we have anxiously awaited their annual arrival, and gobbled up these tasty treats to the tune of 200 million boxes sold each year.

Girl Scout cookies arrived on the scene all the way back in 1917, when the Mistletoe Troop of Muskogee, Oklahoma decided to utilize these baked treats for their fundraising efforts. The idea caught on, and by 1936, the Girl Scouts organization was recruiting commercial bakers to help them keep up with the demand. When WWII arrived, customers were limited to two boxes, available in either vanilla or chocolate, as a result of wartime rationing. But once the hostilities ended, the young entrepreneurs were back in full force, ensuring that American families could buy cookies by the armful, in a variety of flavors.

While many types of cookies are offered annually, many are sold under different names, depending on the geographic region and which commercial bakery produces them. Never the less, everyone seems to have a favorite type and people commonly stock up on numerous boxes during the short-lived opportunity for purchase each year. Maybe you prefer the chocolate goodness of the overwhelmingly popular “Thin Mints”, which take on a texture that can only be described as heavenly when chilled in the fridge. Or, maybe you are partial to the peanut buttery goodness of “Do-Si-Do’s” and “Tagalongs”. Perhaps you like the simplicity of the “Shortbreads” or “Trefoils”, depending on where you live. Finally, there is the mother of all Girl Scout Cookies, the caramel, chocolate, and coconut delicacies known as “Samoas”. Regardless of your preference, there is a smiling little Girl Scout, eager to persuade you to open your wallet and trade some greenbacks for a few boxes of sublime indulgence.

In the past, one had to deal with the cruel wait time, as you placed your order, then waited a few long weeks for them to be delivered. Utter torture, that was. In recent years, the order system has given way to swarms of little girls standing outside of grocery stores, and tempting you with all of your cookie favorites; boxes stacked high and offering promise of instant gratification. It would almost seem as if the cookie boxes reach inside your subconscious and pull you magnetically towards them. This feeling can’t be all that different from what a heroin addict feels.

But these aren’t drug pushers, they are sweet innocent little waifs, looking at you with their puppy dog eyes and softly speaking the words that will make anyone on a diet cringe: ”Excuse me, would you like to buy some Girl Scout cookies?”. Why, of course we would, little girl. But you already knew that, didn’t you? Resistance is futile.

Makes about 2 servings per rib

1. Remove the roast from the refrigerator 2 1/2 to 4 hours before cooking.

3. Place the roast in an open, shallow roasting pan, fat side up. Sprinkle with a little flour, and rub the flour into the fat lightly. Season all over with salt and pepper.

4. Put the roast in the preheated oven and roast according to the roasting chart below, timing the minutes exactly. (This works out to be 15 minutes per rib, or approximately five minutes cooking time per pound of trimmed, ready-to-cook roast.) When cooking time is finished, turn off the oven. Do not open the door at any time.

5. Allow the roast to remain in the oven until oven is lukewarm, or about two hours. The roast will still have a crunchy brown outside and an internal heat suitable for serving as long as 4 hours after removing from the oven.

6. Note: Don't attempt this recipe if your oven isn't well-insulated (that is, if it's extremely hot to the touch when it's in use).

2. Heat a waffle iron. Follow the directions on your waffle iron to cook the waffles. Serve immediately with butter and pure maple syrup or hold in a 200 degree oven, directly on the rack (don't stack them or they'll get soggy). These also reheat very well in the toaster.

4 Bake 10 to 15 minutes longer or until crust is golden brown and cheese is melted.

Cordon bleu is a French dish combining chicken or veal with ham or prosciutto and Swiss or Gruyère cheese. In this recipe, those flavors are simplified to produce a fantastic-tasting pizza.

Be sure to use hot water to make the pizza crust. It helps keep the crust from rising too high during baking and also keeps it chewy and crisp. 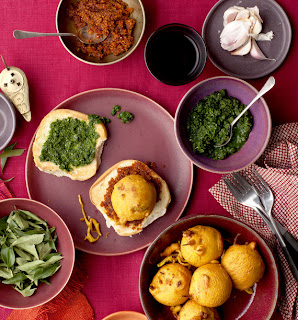 It's best to approach street-side dining in Mumbai—or anywhere in India, for that matter—with caution. But caution, if you love Indian food, is torture. While working in Mumbai, and studying the city's culinary specialties, I learned that you don't typically go to restaurants for great food, you go to the sidewalks. My daily commute took me past hawkers selling the food I craved: pav bhaji, a vegetarian sloppy joe made with tomato and potato stew; pani puri, hollow fried balls stuffed with spicy potatoes or chickpeas; and the dish I crave to this day, vada pav.

The temptation to sample it was almost overwhelming, but for what felt like forever, I didn't dare.

"Wait at least 30 days before trying vada pav," one of my hosts, a native Mumbaikar, had warned. According to my gastric guardian, I had nothing to fear from the vada (pronounced "wahda")—a mixture of chunky mashed potatoes, curry leaves, cilantro, mustard seeds and other spices, dipped in a turmeric- and chili-powder-laced chickpea flour batter, then deep fried. Pav (pronounced, enjoyably, "pow"), the small, square, hamburger-bun-like roll in which the fritter is sandwiched wouldn't pose any problems either.

The rub, my host told me, was the rub: the combination of chutneys slathered on the bun. Just as its Western cousin, the hamburger, remains incomplete without a squirt of ketchup or a dollop of relish, a vada pav lies naked without red or green chutney, or both. Red chutney scorches the mouth with garlic and chili powder (and maybe a touch of tamarind), while the green stuff tingles the lips with green chilis, cilantro and mint. The problem is that most chutneys require water, and the water in Mumbai...well, it's the water in Mumbai.

For two long months I looked but never touched, but then one night, after yet another long day at the office, I couldn't ignore my craving any longer. I hopped into a car and instructed the driver to take me to his favorite vada pav stand. I wanted authenticity, and I got it. This stall was a table covered by a corrugated tin roof at the front of an alley. The kitchen was out of sight, hidden around the corner, and customers poured water from an urn into a single, communal metal cup. Caveat emptor. Every few minutes, a fresh batch of vada would emerge, and I would scrum with the other customers for my share. I finally exchanged 12 rupees (approximately 27 cents) for two vada pav smothered in green chutney worrisomely darkened from oxidation. Never had I been all in for so little.

The exact details are unclear, but people who care about such things credit Mumbai street vendor Ashok Vaidya with inventing vada pav in the early 1970s. It quickly became the city's staple snack, and, after one bite, I understood why. Green chutney is not subtle; anything less than lip-tingling represents a "Western" level of chili-induced heat. The nutty, vaguely familiar taste of mustard seed and the earthy smell of curry leaves waft from the fritter, but vada pav approaches perfection because it mingles potent flavors with so many comforting textures: squooshy bread, creamy and slightly lumpy mashed potato and a hint of crunch from the batter.

Vada pav are easy to make at home. Both chutneys can be prepared while boiling potatoes, and the result is so extraordinary that committed carnivores never seem to notice that they're eating vegan. Better yet, there's no waiting period required.

Combine all ingredients in a food processor with ¼ cup water. Process until a thin sauce forms. Add more water if necessary to achieve a slightly watery consistency.

Combine all ingredients in a food processor. Process until a sticky powder forms with the consistency of wet sand. Add more oil if necessary.

Whisk together ingredients in a large bowl. Continue to whisk while adding ¾ cup water until a thick, smooth batter forms. Let rest at least 15 minutes.

1. Peel and halve the potatoes. Cook in boiling water until fork tender, approximately 20 minutes. Drain. Mash using a potato masher until smooth with a few lumps.

2. Heat 2 teaspoons oil in a skillet over medium heat. Add mustard seeds and curry leaves and cook until the seeds start to pop. Add garlic, ginger and chilis and cook briefly. Stir in potatoes and salt. Remove from heat and stir in cilantro.

3. Divide potato mixture into eight equal portions and roll into balls. (Both chutneys, the batter and the potato balls can be stored overnight, covered tightly with plastic wrap, at this point. The green chutney will oxidize slightly.)

4. Heat 1 quart oil over medium-high heat in a wok or Dutch oven until it reaches 325 degrees.

5. Roll the potato balls in the batter and add to the hot oil one by one. Cook, turning occasionally, until they are golden brown, 3 minutes.

6. Spread red chutney on one half of a hamburger bun, and green chutney on the other half. Place hot potato vada between bun. Press down to flatten slightly.

For sauce, in medium saucepan bring pomegranate juice to boiling; reduce heat. Simmer, uncovered, 25 minutes or until reduced to about 1/2 cup. Add sugar; stir to dissolve.

Meanwhile, in large skillet brown half the meatballs at a time in hot olive oil, turning to brown evenly. Transfer to a 15x10x1-inch baking pan. Bake 15 to 20 minutes or until an instant-read thermometer registers 160 degrees F. In medium bowl combine yogurt, 1 tablespoon of the chives, and 1 clove garlic. To serve, drizzle meatballs with pomegranate sauce; sprinkle with remaining chives and mint. Serve with seasoned yogurt and pita wedges. Makes 6 to 8 servings.
Posted by Robalini at Friday, January 06, 2012

Dam I'm Indian and I had no clue you could actually make vada paav at home. Guess that sounds silly but I think I imagined some complicated mechanical process being involved. Weird! Thank you, this has considerably busied up what would have otherwise been a meaningless stoned evening at home.

A stoned evening at home is never meaningless...