50 Things You're Not Supposed To Know: Religion 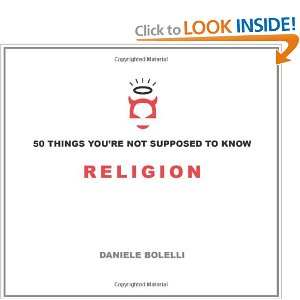 Publication Date: December 20, 2011
Series: Things You're Not Supposed to Know

If you're waiting for the world's "Holy Men" to tell you the truth about their religions, do you suppose they'll mention that:

The Tao Te Ching was only created because Lao Tzu was thrown in jail by a disciple who didn't want to let him leave town without writing down his teachings? "Passover" celebrates God killing all firstborn Egyptian kids while Jewish homes were "passed over" by the angel of death? Shinto, a nature-loving, mellow religion, was transformed by the Japanese government into a nationalistic ideology promoting "holy" war?

Adding to its popular 50 Things You're Not Supposed To Know series, Disinformation has teamed with Daniele Bolelli — writer, professor of comparative religion, and renowned martial arts practitioner and philosopher — to tackle an ever more serious and important topic: popular misconceptions about religion. Among other revelations:

Capturing just the right balance of in-depth knowledge, respect, humor and irreverence, Bolelli takes an ecumenical approach to the task, revealing surprising, shocking, and little-known facts about the "big three" religions but also many more, including Zen Buddhism, Hinduism, Zoroastrianism, and, of course, the increasingly popular non-religion: atheism.

Daniele Bolelli is a writer, college professor and martial artist. Born in Milan, Italy, he is part of a family of writers. His father, Franco Bolelli, is one of the most influential modern Italian philosophers, while his mother, Gloria, is the author of four books and a freelance journalist.

His first book published in the United States was On the Warrior’s Path: Philosophy, Fighting, and Martial Arts Mythology. It is one of the top modern bestsellers on the philosophy of martial arts and has been used as a textbook in several universities in the United States, Canada and Italy. A fourth-degree black belt, Bolelli has taught seminars about martial arts in schools around the world and has coached and fought professionally in mixed martial arts (MMA).

Bolelli is a lecturer at several major universities in Southern California. He is a professor in the History Department at Santa Monica College, teaching courses on the history of religions. He also teaches in the Asian American Studies and World Arts Cultures Departments at UCLA and the American Indian Studies Department at CSULB.

Bolelli is a regular contributor for several magazines both in Italy and in the United States. A graduate of UCLA with Bachelors and Masters degrees, he lives in Los Angeles.

Email ThisBlogThis!Share to TwitterShare to FacebookShare to Pinterest
Labels: Disinformation