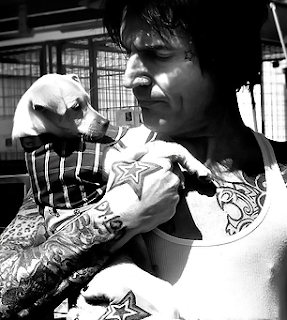 'I would highly encourage people not to buy animals from a pet store'
Steve Baltin
April 9, 2012
Full Article:
http://www.rollingstone.com/music/news/tommy-lee-speaks-up-for-animal-adoption-20120409

Before heading out on the road for Mötley Crüe and Kiss' joint tour, Crüe drummer Tommy Lee is enjoying some quiet time at home with his new puppy, Bowie. "He’s got these crazy gray-green eyes. I love David Bowie and it was either Bowie or Bam," Lee tells Rolling Stone. "We ended up going with Bowie just 'cause of his eyes. He looks like Bowie, dude."

When Lee and his girlfriend Sofia decided the time was right to bring a four-legged friend into the household, they decided to adopt. "We went to a couple of different shelters and we ended up over at East Valley in Van Nuys and there he was, just sitting there with three other dogs. And we were like, 'Oh my God, we gotta get this guy a home. Who could abandon this fucking thing? This is the cutest thing on the planet. I want to kill whoever let him go,'" Lee says.

Anyone who's ever rescued a dog can empathize with Lee's anger, which is why the drummer is speaking out on behalf of adoption. "The [shelter] is scary. It is loaded with beautiful dogs and I would highly encourage people not to buy animals from a pet store," he explains. "They’re bred for all the wrong reasons, for mostly money and it’s just kind of a bad scene. We ended up going [to the shelter] and I’m so glad we did."