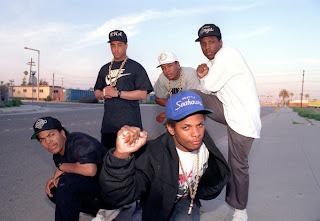 In 1985, Los Angeles rapper Toddy Tee released what could be considered West Coast hip-hop's opening salvo against police brutality in black neighborhoods. The electro-grooved "Batterram," named for the battering ram that then-LAPD Chief Daryl F. Gates used to smash into homes of suspected drug dealers, was a hit on local radio station KDAY-AM.

The track went on to become a protest anthem in minority neighborhoods around the city where the device was often deployed against homes that were later proved drug-free: "You're mistakin' my pad for a rockhouse / Well, I know to you we all look the same / But I'm not the one slingin' caine / I work nine to five and ain't a damn thing changed …" rapped Toddy Tee.

The L.A. riots of 1992 arrived with its soundtrack in place. Sanctioned police brutality, a grim job market, gang life, a decimated school system, the toll of crack on poor neighborhoods and racial tensions were all being documented by West Coast rappers long before Rodney King's beating by Los Angeles Police Department officers was documented on tape. Inner-city kids were infusing hip-hop — a genre that arose out of the Bronx in the last '70s — with hard-core, L.A.-centric rhymes about gangs and the crack-addled neighborhoods around them.

"Even before the riots … voices in L.A. hip-hop were foretelling what was to come," said director John Singleton, whose 1991 film "Boyz n the Hood" was one of the first empathetic looks at South L.A. life for many Americans. "So many people who didn't grow up black and poor couldn't understand why it happened. You can live in a different part of L.A. and never understand that frustration. But if you listen to 'F— tha Police,' you hear where they're coming from."

The riots gave marginalized music from the hood a global stage and sudden mainstream legitimacy. The music born of the very conditions that precipitated the riots now transcended South L.A., and major labels began signing and promoting West Coast artists like Snoop Dogg and Tupac Shakur. For better or for worse, the Southland style that became known as gangsta rap changed the trajectory of pop music by becoming the '90s definition of cool.

For suburban fans who'd been consuming N.W.A's music as a race-music expression of white teenage angst, the televised revolution in L.A. made it clear that the lyrics weren't just outlandish fiction set to hard beats. They were rooted in bitter truths, a hard reality that L.A. was a two-tier city with gross inequities in both wealth and possibility.

In addition, references from the riots permeated pop music culture like no other medium — from rapper Biz Markie name-checking Rodney King to rockers Rage Against the Machine screaming songs about the uprising.

Though gangsta rap eventually lost touch with the very streets it came from thanks to heavy commercialization, its initial promise has not been lost on a new generation.

Kendrick Lamar was just 4 when the riots broke out, yet many credit the Compton rapper with reviving those early strains of West Coast rap. "When I talk about what people are going through, all it's doing is letting people know what's going on in the community," said the 24-year-old. "There's nothing new under the sun. I just got a different spin on it. It's about looking at all angles of the person growing up in Compton, not just the shooter but the victim."

If L.A.'s rappers seemed prescient in the face of the riots, it was nothing compared with how fast they reacted in the days that followed. Before the National Guard even pulled out of L.A., underground freestylers at South L.A.'s Good Life Cafe were rapping about the uprising, and N.W.A's Ice Cube was recording "The Predator." The album was released seven months after Florence and Normandie exploded: "Started they investigation / No driver's license, no registration / When I stepped out the car they slammed me / … y'all, who got the camera" he rapped in "Who Got the Camera."

"Creatively, the rhetoric may have got a little higher" after the riots, says Ava DuVernay, who directed the documentary "This Is the Good Life," about South L.A.'s underground Good Life rap scene of the late '80s and '90s. She is the first African American woman to win the directing award at Sundance, with her recent film "Middle of Nowhere."

"It wasn't like the content was changing, maybe just the style got a little more aggressive," she said. "People were mad, but there wasn't a change in what people were talking about — just the manner in which it was being expressed."

Ironically, though, it was seemingly an ode to smoking pot — recorded during the riots and released in December 1992 — that would change the course of rap. The new, laid-back sound belied the fact that the record was tackling some of the toughest subject matter around.

"When talking about music that really defines and captures that moment," says Sheena Lester, former editor in chief for XXL and Rap Pages magazines, "the only one that matters is Dr. Dre's 'The Chronic.' Not only did it capture the essence of pre-riot, during-the-riots and post-riot energy in the neighborhoods, it actually featured excerpts from filmmaker Matthew McDaniel, who captured [the reactions of] people outside of First AME Church right after the verdicts were announced. Those excerpts are what give 'The Chronic' its resonance."

"I don't know what kind of album 'The Chronic' would have been without the riots," said Kurupt, who rapped on the record when he was 19. He recently appeared in the VH-1 documentary "Uprising: Hip Hop and the L.A. Riots."

"It was coming from the middle of it all, saying this is what happened. Not only did the streets feel it, America felt it. It was a blueprint and a map through the emotions and situations that transpired over those three days," he said.

Major record labels began to cash in on this new twist on the rap narrative, and that gave rise to a new breed of superstar MC in the form of Snoop and Tupac. But like most music co-opted by the mainstream, the style dubbed "gangsta rap" quickly devolved into very profitable self-parody while claiming to "keep it real." Enter MTV's"Cribs," "Pimp My Ride" and Ja Rule's gold-toothed grill.

It also paved the way for a far more commercial style of hip-hop that largely dropped the subject of social ills in favor of bragging about bling. Still, that early West Coast rap alerted the mainstream — and a post-civil rights generation — that all was not well in America.

But today a younger generation of rappers outraged by the killing of Trayvon Martin, and the ways in which socioeconomic conditions for minorities remain much the same as they did 20 years ago, are still harnessing the potential power of rap.

Lamar, who performed with Snoop and Dr. Dre at the Coachella festival and is on Dre's forthcoming album, recently began talking about the resonance of the track "Batterram" in interviews. He recalls living in Compton when the riots erupted.

"That was just us in the community giving a cry for help, letting the world know that we weren't gonna take no more, even if we gotta do some off-the-wall … for people to understand it," said Lamar, who's working on his own album.

"Looking back, it just taught me the responsibility of doing something I actually believed in. People believed that situation wasn't right, so they took a stand for it, you know?"

Hmm it looks like your site ate my first comment (it was super long) so I
guess I'll just sum it up what I submitted and say, I'm thoroughly
enjoying your blog. I as well am an aspiring blog
blogger but I'm still new to the whole thing. Do you have any tips for newbie blog writers? I'd certainly appreciate it.

My web site - cures for fungus on toenails

I really love your website.. Very nice colors
& theme. Did you develop this site yourself? Please reply back as I'm hoping to create my very own blog and would like to know where you got this from or exactly what the theme is called. Appreciate it!

Feel free to surf to my page; venapro side effects