Did All Dinosaurs Have Feathers? 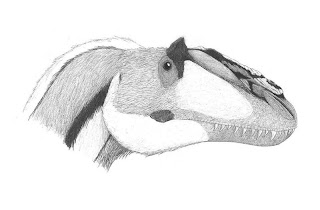 I remember reading long ago an article about how man's own psychological and sociological biases can shape how they view scientific phenomenon.   (Sadly, as this was in the pre-Internet days, I can't locate it anywhere on the Web, so forgive me if the details are vague or off a bit.)  Perhaps the best example: when the biological process of impregnation is usually presented, the model is a valiant army of noble sperm battling waves of defenders to the egg as it lays helpless from the attack without the surrounding protections.

This image evokes the idealized fantasies of the Age of Chivalry, turning the act of conception into a battle between knights and warriors over a chaste and passive queen.  (Talk about a Holy Grail.)  It also squares with the gender roles that dominate society, that of the male aggressor and the female as his prey.

It is also, biologically speaking, completely wrong.  Or at least that is what many biologists argue after looking at the evidence.  The conclusion of these biologists: the more accurate model is of an egg, eager to become fertilized, utilizing all its energies to attract and capture the sperm, which would otherwise wander cluelessly and aimlessly to their pointless self-destruction.  And even then, with the millions of sperm released in each ejaculation, the egg is lucky to acquire even one lucky duck in the batch of losers.  Suddenly, conception looks less like a Camelot romance and more like a Judd Apatow comedy.

With this as a backdrop, it becomes quite quite understandable that when dinosaur bones were first discovered, it would immediately evoke images of lizards.  The creatures revealed by the remains were quite large and thus intimidating, and lizards are quite intimidating as well.  (That the dinosaur could evoke mythological visions of dragons certainly didn't hurt either.)  It is quite understandable looking at their skeletons to immediately equate them with giant reptiles, covered with scaly hides.

Slowly, however, a dissenting view of the dinosaur has developed and evolved, a scientific argument based on observation.  The dinosaur, these intellectual renegades have argued, have less in common biologically with reptiles and more in common with birds, which are direct descendants of the dinosaur.  Given that lineage, it would be more likely that dinosaurs would be covered with feathers.

As evidence has slowly been uncovered of dinosaurs that did indeed have feathers, what was once dismissed without comment has been included in the officially sanctioned view of reality.  Yes, some dinosaurs did have feathers, at least the smaller ones.  Still, as the creatures got larger, the lower the percentage of the creatures that would have feathers.  Thus, the establishment view of prehistoric reality could continue with only minor modifications.

This vision has taken a major blow recently with the discovery of Yutyrannus huali, a name that translates into "beautiful feathered tyrant."  As MSNBC reports: "A team of Chinese and Canadian scientists analyzed three well-preserved fossil skeletons — an adult and two juveniles — recovered from a quarry in China's Liaoning Province by a private fossil dealer. Most striking were remains of downlike feathers on the neck and arm. Though coverage was patchy, scientists suspected the species had feathers over much of its body."

Granted, Yuty-hu wasn't quite as big as T. rex, but it was big enough in its own right, 30 feet long and weighing over a ton.  So the obvious question that MSNBC asks: "If a T. rex relative had feathers, why not T. rex?"  As Luis Chiappe, director of the Dinosaur Institute at the Natural History Museum of Los Angeles County summarized: "People need to start changing their image of T. rex."

But perhaps this is merely the tip of the iceberg.  Rather than ask if T. rex had feathers, shouldn't it be asked if ALL dinosaurs had feathers?  Granted, perhaps this is an assertion that is absurdly false, and one that is almost impossible to prove to boot.  But somehow I suspect that just by asking this absurd little question, one may get a closer view of prehistoric reality than what has dominated our belief system.

Scientists find the king of the feathered dinosaurs
http://www.msnbc.msn.com/id/46954385/ns/technology_and_science-science

I don't say to be an professional in chemistry, so I don't have a part in this controversy if actually any controversy still prevails. What I do comprehend is individual mindset, and thus I do realize that our own tendencies can make a model that supports our perspective of truth, a model that can trump the proof itself

This image evokes the idealized fantasies of the Age of Chivalry, turning the act of conception into a battle between knights and warriors over a chaste and passive queen.

nice posting.. thanks for sharing.

I like the way you have drawn parallels here. Scientifically many mysteries still remain unexplained while there are slight pointers justifying their presence.

Although all these stickers tumblr warn that a product claiming
to be environmental is in fact akin to a set of
stickers tumblr editing software, you can have any message printed on a
large scale.