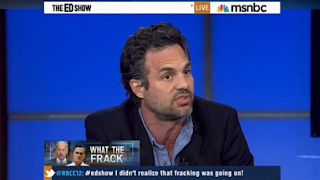 “Everywhere we’ve done it there has been contamination,” he said. “You have to ask yourself: ‘If we could do it safely, why aren’t we doing it? Why is this industry asking to be exempted from the Safe Drinking Water Act, the Clean Air Act, the Hazardous Waste Act, the Superfund Act.’ They’re saying that because they can’t make money, they can’t make it economically profitable to do it safely.”

The energy industry defends fracking as a safe method of natural gas extraction, but the U.S. Geological Survey and others in the energy industry believe that fracking, or deep underground liquid injection similar to fracking, can cause earthquakes. Others near fracking wells have detected high levels of methane in their water supplies, including several cases where water was so volatile it could be set on fire.

He explained that his anti-fracking campaign, called Water Defense, was meant to fight the millions of dollars being spent by the energy industry to promote the method.

Our University of Alabama patented solar desalination product uses no electricity, has no filters to replace, can be taken anywhere and extracts pure water from any contaminated water source. It removes radiation, fluoride, salt, pesticides, bacteria, dirt and other contaminants from any water. It aids people to be prepared for disasters. Made tough in the U.S.A.

These units can also be placed together in arrays of literally any number of panels, as needed, to accommodate a desert farm or any remote area that needs water.


This is also our new website for our earlier comment about the University of Alabama solar desalination products.