Was resurrection story inspired by the cloth? 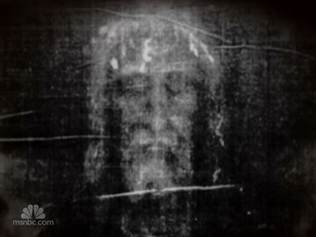 The Shroud of Turin has been seen as many things over the past 620 years, ranging from true burial cloth of the risen Jesus to clever medieval fake, but Cambridge art historian Thomas de Wesselow puts together a 448-page-long case for one of the lesser-known theories in his new book, "The Sign": that the shroud's negative image of a naked, bloodied man was really produced by Jesus' decomposition, and that the stories of his resurrection were inspired by the display of that cloth to his earliest disciples.

"The message really is that the Shroud of Turin is authentic," de Wesselow told me. "This is the only rational way of understanding this image. It can be understood entirely naturalistically. There's no reason to invoke a miracle to explain the image."

De Wesselow acknowledged this could be a hard sell for believers as well as for skeptics. "There are two big things I am arguing against," he admitted.

"It's breathtakingly astonishing," said Joe Nickell, a senior research fellow at the Committee for Skeptical Inquiry who has written extensively about the shroud. "He's clearly not a doubting Thomas. He's come up with some rather silly ideas, and then as people often do, he's fallen in love with them."

Meanwhile, in a column about the shroud, the Catholic Herald's Francis Phillips basically brushed off de Wesselow's views, saying they were "too eccentric to reproduce here."

Legends and lore for Easter

"The Sign" is the latest example of shroud lore that comes out during the Easter season, just around the time when millions of Christians are dwelling on the story of Jesus' crucifixion and resurrection. (I'm linking to other examples at the end of this item.) The Shroud of Turin has a clear line of provenance going back to around 1390, but when you try to go further back, you can easily get swept up in tales of the Knights Templar and legendary relics like the Veil of Veronica and the Holy Mandylion.

De Wesselow comes at the story from his background in art history. He's been researching the story of the shroud full-time for the past five years, and has woven together an explanation from scientific findings that seem to support the shroud's authenticity, plus perspectives on the animist beliefs of ancient peoples.

"I've studied images, what they mean and how they affect people," de Wesselow said. "In the old days, people saw images as potentially alive. They had potentially a consciousness. ... That type of thinking was absolutely standard before the modern age. It has nothing to do with an optical illusion, and it has nothing to do with people being stupid."

De Wesselow picks up on the idea that the shroud is actually a "vaporograph," colored by a chemical reaction between the gases exuded by a dead body and the carbohydrate deposits on the surface of Jesus' burial cloth. Blood stains were left on the cloth as well. When the shroud was taken from the body, the ghostly image remained behind — and de Wesselow said Jesus' disciples could have interpreted that image as the spiritual manifestation of their leader.

"The appearances of the risen Jesus were simply viewings of the shroud image," he said.

Here's what de Wesselow thinks happened next: After a series of viewings in the Holy Land, the shroud was and taken to the city of Edessa in modern-day Turkey, where it came to be folded up, framed and venerated by the Byzantine Christians as the Mandylion. The cloth was transferred to Constantinople in the 10th century, and disappeared in the year 1204, only to turn up again in France in the 1300s. The shroud was transferred to Turin in 1578, and it's been there ever since.

Holes in the theory?

What about the biblical references to the risen Jesus conversing with the apostles, or eating fish to prove he was really real, or letting St. Thomas touch his wounds? De Wesselow noted that the first accounts of the crucifixion and resurrection were written down decades after they supposedly occurred. "In that time, there's plenty of room for all the legends to be added to the story... These are stories written by sophisticated individuals later on to prove the point that there was a physical resurrection," he said.

Is there any evidence that dead bodies could actually produce the sort of vaporograph that de Wesselow is talking about? "We haven't got anything precisely similar," he acknowledged, "but I don't think that's surprising."

He pointed to a phenomenon known as the Jospice Imprint: In 1981, a cancer patient died at an English hospice and left a partial imprint of his body and face on a mattress cover. "It seems to have been formed from urine pooling around his body," de Wesselow said. That's not what he thinks happened in Jesus' case, but he nevertheless cited the imprint as "another example of a strange image."

De Wesselow totally buys into the evidence provided by the Shroud of Turin Research Project, to the effect that the image is not an artistic forgery but the real imprint of a battered man from centuries ago. That's a huge leap of faith right there. If you accept that, there are only so many types of explanations for the shroud you can come up with. De Wesselow said his explanation addresses the shroud mystery as well as the roots of belief in Jesus' resurrection.

"There are explanations involving a miracle, or that Jesus was spiritually resurrected and appeared in visions to his disciples," de Wesselow told me. "Since the 18th century, scientists have tried to explain the resurrection, and they've basically given up. They've basically forgotten about the whole problem. What I think I can do is provide a fairly coherent explanation which is completely naturalistic. It's a better alternative to the traditional Christian view."

Nickell, however, prefers to stick with his own skeptical view. "I think the resurrection appearances can be seen as pretty much the same kind of thing we have today with apparitional experiences — ghosts, if you will," Nickell said. "We could see ourselves in such a situation with, say, Elvis sightings. You can understand them as experiences that people had but were illusory."

The way Nickell sees it, the biggest argument against de Wesselow's "cloth-as-Jesus" hypothesis comes from the scriptures themselves: There are only vague references to burial cloths in Matthew, Mark and Luke. The gospel of John, meanwhile, refers to Jesus being covered by separate cloths for the face and the body, which is "fatal to the Shroud of Turin," Nickell said.

"The bottom line for me is, if this author were correct, and Jesus' shroud had survived, surely one of the holy evangelists would have made note of it," Nickell said. "If it had been kept and had a remarkable picture of Jesus on it, we would have known about it. And we don't."

Email ThisBlogThis!Share to TwitterShare to FacebookShare to Pinterest
Labels: Jesus, Shroud of Turin