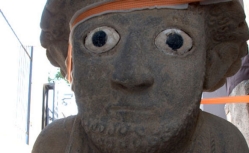 An incredible giant human statue from the Iron Age has been discovered in Turkey.

Archeologists in the southeast region unearthed the colossal head and torso sculpture at the site of a Neo-Hittite city, dating the piece to sometime around 1000 B.C. Standing about 5 feet in height, the bearded, curly-haired man holds a spear in one hand and a shaft of wheat in the other.

A large semi-circular column base was also discovered; both pieces are believed to be from a monumental gate complex to the royal city of Kunulua, capital of the Neo-Hittite kingdom of Patina. A carved lion was discovered last year at the site, and researchers believe the colossal statues served to mark the boundary between the human and divine realms, with the king serving as a link between the two.