The strange saga of the Stirling Club 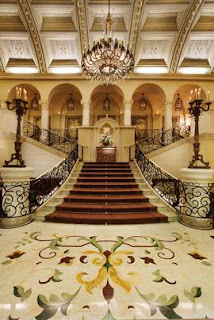 A real estate mogul, a legendary venue and a deal snuffed out in the middle of the night
John Katsilometes
Thu, Jul 19, 2012
http://www.lasvegasweekly.com/news/2012/jul/19/landmark-limbo-strange-saga-stirling-club/

Late at night on May 17, the fate of the Stirling Club at Turnberry Place was hanging in cyberspace.

Stephen Siegel had committed to buy the club, but he needed to move quickly. Stirling Club was set to close May 18, a Friday night, hosting its “last dance” at 10:30 p.m. A day earlier, Siegel sent an email to the Turnberry Place Master Homeowners’ Association saying he had agreed to buy the Mansion — home to the Stirling Club and all of its amenities — for several million dollars. (Siegel has declined to specify his offer, but those informed about the transaction have tossed around figures between $9 million and $12.5 million.)

The Mansion and Stirling Club is a 3.5-acre recreational oasis just off the Strip that was home for a decade to one of the city’s chicest night spots for Turnberry residents and their guests. Entertainment director and singer Kelly Clinton-Holmes and her three-piece band played each Saturday night, and entertainers from around Vegas, headliners like Clint Holmes (Kelly’s husband) and performers in production shows up and down the Strip, happened in to sing and jam with the band. Jack Jones, Tom Jones, Frankie Scinta, Frank Sinatra impressionists, Leigh Zimmerman of The Producers and Michelle Johnson of Nunsense — stars of all variety have found their way to late-night hangs at the Stirling Club.

Siegel can afford the sort of scratch it takes to buy a local landmark. He’s the founder of the Siegel Group, which owns 15 low-budget Siegel Suites residences in Las Vegas and has vaulted into boutique hotel development with the purchase of Rumor across from the Hard Rock Hotel on Harmon Avenue (the boarded-up St. Tropez when the Siegel Group purchased it in 2009), Artisan, Gold Spike/Oasis and the Resort at Mount Charleston. The Siegel Group’s current reclamation project is Atrium Suites, just north of the Hard Rock Hotel on Paradise Road.

Further north, across Paradise from LVH, is the Stirling Club, which for a few hours in May also seemed destined to become a Siegel Group holding.

Siegel certainly pushed for a deal, even while lacking a proper contract to formalize the sale. For a man who has built an empire on making broad-ranging property purchases, the idea of sending several million dollars to a seller without a binding contract seems a bit … unusual.

“All I had was an email agreement,” says Siegel, founder of the Siegel Group and a resident of Turnberry Place with two units at the high-end, high-rise development. “I felt like our deal was done. I was wiring money without a signed contract, and this was at 11 p.m.”

He needed a majority decision from the homeowners’ association to approve the transaction, but that seemed a mere formality and was expected to be delivered as early as the afternoon of May 18, the announced closing date. The plan to announce the impending sale was as grandiose as the Mansion itself: Las Vegas real-estate broker David Atwell, a Turnberry Place resident who has been involved in some of the specifics of the proposed sale, and Stirling Club Manager Mike Saye were going to tell the crowd filling the lounge that a deal had been made between Siegel and the property owners.

Bedlam, or at least robust applause, was expected.

“But after we thought we had the deal, we heard half of the board members were not available to vote on it,” Siegel says. “The other half voted not to extend the dues. I was stunned.”

By voting not to extend the dues being paid by Turnberry Place residents — $400 monthly from about 700 residents — the deal was effectively snuffed out.

“I don’t know of any other place like the Stirling Club,” says Atwell, a high-profile Turnberry Place resident who forged the massive real-estate deal that led to the construction of the Forum Shops at Caesars Palace and who also negotiated the sale of the New Frontier land to the Israeli corporation El Ad Group for $1.24 billion.

Atwell’s 93-year-old mother, Candy, also lives at Turnberry Place and says, “It’s a special, old-Vegas place. We’re proud of it, and we don’t want to see it closed.”

But that’s what it is, languishing on lockdown since that night in May when Siegel’s deal cratered. The owners of Turnberry Place, Jeffrey and Jackie Soffer and their company, Turnberry Associates, have since posted the Mansion on the Sotheby’s International realty website. The asking price is $18 million, far higher than the offer Siegel made on the parcel just months ago.

The link to the Sotheby’s listing describes in lavish detail a multi-dimensional fortress featuring a spa, pool, fitness center, tennis courts, two kitchens, 10 bedrooms, 20 baths and separate staff quarters in an 80,000-square-foot main building. The hope is that a high roller of extravagant means (one resident keeps talking wistfully of the Sultan of Brunei) will leap into the equation and pay the $18 million asking price for the Mansion and then reopen the club.

To put it mildly, the idea that the aristocratic structure could serve as a private residence for a billionaire is not universally accepted among Turnberry Place homeowners.

“If somebody bought it as a private residence, you would need a 50-foot wall, at least, to be built so residents couldn’t see inside the pool and tennis court areas,” says Siegel Group Senior VP Michael Crandall, who also happens to live at Turnberry Place. “It is not a private residence.”

“It’s licensed as a private club,” Siegel says. “It has to stay that way.”

Siegel still hopes to make a deal directly with the Soffer Group to buy and reopen the club, piece by piece.

“I don’t think I ever stop trying,” he says. “It’s a good asset, still. I think we’re all capable of putting a deal back together and making it right.”

What doesn’t make a lot of sense to Siegel is allowing the club to close and surrendering the monthly dues from residents. Already, between 60 and 90 employees, full- and part-time, have lost their jobs.

“I’m not a fan of closing businesses,” he says. “I don’t like to kill something that is still alive.” Siegel adds that he has “a lot of different ideas to modernize Stirling Club, ideas for upgrading the amenities that everyone will be really, really happy with.”

A few nights ago, Siegel says he was with a group of Turnberry residents looking for somewhere to dine and hang out. For the past decade, the go-to hot spot was Stirling Club.

For now, back to the table, to work on a way to resuscitate the Stirling Club.