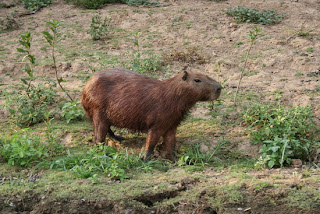 On July 22, 2011, Nick Kamp, a wastewater operator, reported spotting a capybara at the Paso Robles Wastewater Treatment Plant in California. As it turns out, sightings of the rodent have focussed on two nearby locales to the wastewater treatment plant.

Officials in the Paso Robles area now say they may set traps after Kamp and other workers at a wastewater plant spotted a capybara three weeks ago.

Kamp took photos of the animal during his 2011 encounter and described it thusly, “It had the body of a pig, but it had a longer nose and head to it.”

He said that the animal seemed calm, and swam with its head above and below the water.

Todd Tognazzini, a lieutenant with the Department, believes the capybara is an escaped pet, although the animal cannot legally be kept without a special permit. Department of Fish and Game spokesman Andrew Hughan said that the capybara isn’t dangerous, “just weird looking.”

Eight months later, a man who was feeding his horses said a large rodent-like creature came up, scared his horses away, ate some hay and then chased after a dog. The man fired a shotgun at the animal to protect his dog, and called wildlife officials after it left the property. Wardens confirmed footprints at the scene were that of a capybara, but traps they set caught nothing.

Two years ago, a capybara was spotted at a ranch near to the treatment plant, only a mile away, and the ranch owner took photos of the animal. Game wardens received a report about three years ago of a capybara in a pond near Hunter Ranch Golf Course.

Now that looks like a really huge rodent. I wonder if it is as irritating as mice and rats. Well, I do hope they don't kill them but rather relocate them or something.