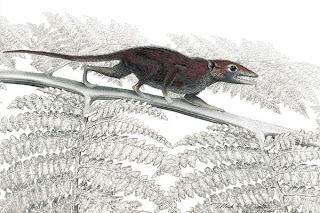 A tiny, shrew-like creature of the dinosaur era might have been, in a sense, the mother of us all.

Named the "Jurassic mother from China" (Juramaia sinensis), the newfound fossil species is the earliest known ancestor of placental mammals—animals, such as humans, that give birth to relatively mature, live young—according to a new study.

The 160-million-year-old specimen pushes back fossil evidence for the evolutionary split between the placental and marsupial lineages by 35 million years. Although it's unclear if the creature is a direct ancestor of modern placentals, it's "either a great grand-aunt or a great grandmother," the study authors say.

Placentals—including creatures from mice to whales—are all that remain of the so-called eutherian mammals, of which J. sinensis is the oldest known specimen.

The first eutherians evolved from the ancestors of marsupials, which have pouches and give birth to comparatively immature offspring...

Dino-era Mammal the "Jurassic Mother" of Us All?
John Roach
August 24, 2011
http://news.nationalgeographic.com/news/2011/08/110824-placental-mammal-shrew-fossil-earliest-ancestor-evolution-science