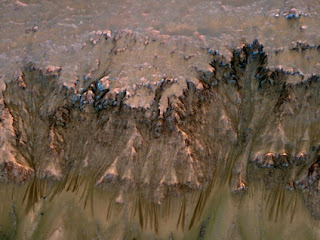 A NASA spacecraft in orbit around Mars has detected signs of what appear to be seasonal flows of salty water on the surface of the red planet during warmer summer months, an "eye-opening" finding that could help scientists target future missions to look for signs of microbial life in the frigid soil, researchers said today.

The Mars Reconnaissance Orbiter, launched in 2005 and conducting continuous observations of Mars since November 2006, spotted the apparent flows in the steep walls of a handful of craters where exposed bedrock juts out from the sides.

Researchers studying high-resolution images of the same areas as the seasons changed on Mars noticed the flows appearing, advancing and then fading away as summer gave way to fall and temperatures dropped. More than 1,000 such flows were seen in one crater alone. The flow channels appear to dissipate in bright, smooth areas, indicating deposits of some sort may have been left behind.

"These form and grow, they darken, some of them start fading while new (tendrils) are forming and growing still," said MRO Principal Investigator Alfred McEwen, a planetary geologist at the University of Arizona. "Eventually, they all fade and eventually, they completely disappear...The sites where we find these are rare. We have found seven confirmed sites and about 20 candidates that we haven't confirmed with repeat imaging quite yet."

While the dark, dendritic flow patterns look like the result of flowing water to MRO's camera, other instruments have not yet been able to provide confirmation.

"We have this circumstantial evidence for water flowing on Mars," McEwen said. "We have no direct detection of water. There is an instrument on MRO called the Compact Reconnaissance Imaging Spectrometer for Mars, CRISM, which acquires spectra of many wavelengths at a best scale of about 18 meters per pixel. These [flow] features are one to a few meters wide. So they're not fully resolved and CRISM does not see water.

"We suspect there is water present at the surface only in small areas for short periods of time, which would be consistent with the CRISM data. It's important to bear in mind that the environment of Mars is very different from Earth. The atmospheric pressure is less than 1 percent that of Earth. Pure water on these sites at these temperatures would boil in spite of it being well below the boiling point at one [atmosphere] on Earth."

Scientists suspect the presumed water flows are the result of thick, syrup-like brine with a high salt content that would enable it to remain in liquid form at the low temperatures of a martian summer.

"We know Mars has a lot of ice," said Philip Christensen, a geophysicist with Arizona State University. "But this is the first time we've seen the potential for liquid water. It might be salty water, but it's still liquid. Liquid water, certainly to an organism, is very, very different than ice."

Lisa Pratt, a biogeochemist, Indiana University, agreed, saying "I think this is an eye-opening discovery that will really help us begin the planning process for future missions specifically looking for signs of life on present-day Mars."

"We've waited a long time as a community for a place where we could monitor processes before, during, and after some type of recurrent event that suggested you might have a brine close enough to the surface that you might be able to see evidence of some type of a biological process," she said.

"Again, the difficulty has been that Mars is simply too large a planet to keep an eye on every place all the time. We've needed a way to really focus our instruments and think about the engineering decisions that need to be made for future landed missions or for future orbiting missions. And I really think we now have it."

Bill Harwood has been covering the U.S. space program full-time since 1984, first as Cape Canaveral bureau chief for United Press International and now as a consultant for CBS News. He has covered more than 125 shuttle missions, every interplanetary flight since Voyager 2's flyby of Neptune, and scores of commercial and military launches. Based at the Kennedy Space Center in Florida, Harwood is a devoted amateur astronomer and co-author of "Comm Check: The Final Flight of Shuttle Columbia."