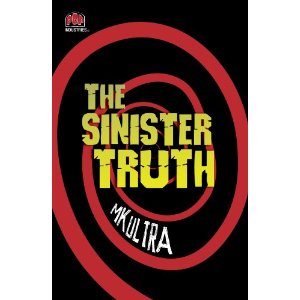 We laugh to keep from crying seems to be the lesson learned from The Sinister Truth, a graphic novel about MKULTRA. MKULTRA, of course, is the brainwashing program conducted by the CIA largely in secret although much has been learned about it since from declassified files. Researchers have poured over such things and produced much in terms of documenting and exposing this record of human abuse. Writer Jason Ciaccia and Aaron Norhanian have taken it in a different direction, as a satirical graphic novel. MKULTRA luminary Sidney Gottlieb appears as the first protagonist, a mad scientist rendered in Ralph Steadman like fashion, cavorting with hookers, making murderous chaos of laboratories, LSD drenched mania animating his every move. All the scenes of mayhem, of course, are accompanied by very neatly typed references to their corresponding government file or report. According to Sinister Truth it all started after Eisenhower snubbed Castro, forcing the Cuban dictator into the arms of Soviet Communism. Much of the Sinister Truth graphically depicts the various absurd assassination attempts against the Cuban dictator. The subject begs an even more thorough examination through such gallows humor and sick comedy-the roots of MKULTRA trace back to back engineering North Korea's brainwashing of American pilots and that could make a volume in and of itself. The creators state that their research involves over 18,000 recently declassified CIA File. Surely this is a cause for a multi volume series!

Prison remediation activists have produced It’s More Expensive To No Nothing, a DVD documentary about the effect of the rehabilitation programs behind bars. Steamshovel receives a lot of mail from prisoners in part because it presents points of view that differ from the mainstream which has an ideational center that many prisoners have long since departed. Reasons for this include unjust incarceration in some instances, in other instance prisoners seek to more to affirm the dissenting view of the world that led to criminal behavior; and, of course, many are just bored with whatever copies of Time and Newsweek the prisons leave out for reading purposes. It’s More Expensive To Do Nothing points out the cost advantage of remedial programs--$5000 for rehabbing as opposed to the $75,000 it costs to keep someone in prison for a year. Much often is said about many prisoners being exactly where they want to be—Charles Mansion often offered as the prime example, and with these figures that becomes easier to understand. So in a way this documentary exposes a prisoner scam; but, of course, in a more important way it makes a common sense argument about retraining and release, especially for nonviolent first offenders. Ordering Steamshovel in prison can be the first step in literacy retraining, one that allows for intellectual self-respect—that is, literacy as a gathering of intelligence rather than acquiescence to the status quo. There are hardball realities to face, though: many prions reject material that has even simple urse words—in one case, a book was returned that had a small amount of public hair appearing in a photo—and the outsourcing of prison maintenance to groups like Wackenhut ensure via competition that the prison industry will continue to be grown. Nevertheless, this documentary leads the way to the glimmer of hope that still resides within the locked up readership. 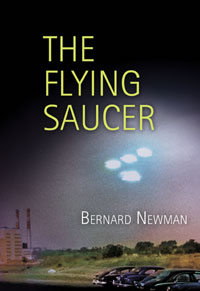 Westholme Publishing reprinted The Flying Saucer as part of its “America Reads” program, designed to present long forgotten fiction from various times in American history, although the fiction all seems British. The other two immediate volumes include Limbo, about cyborgs trying to takeover and replace human limbs; and One, a 1984-like examination of state suppression of individuality. These other two belong solidly in the science fiction camp. As the first novel to ever use the term “Flying Saucer” in its title, however, and coming so close to that first post-War wave of sightings that included Kenneth Arnold and Maury Island, the type of fiction represented by The Flying Saucer brings it a step closer to reality as actually experienced rather than speculated about. UK author and historian Bernard Newman has the first of the “saucers”--described actually as rockets--come down in Leicestshire but by chapter three has natives discovering them in the American southwest. It’s not a real alien threat, however, only a group of scientists staging crashes in order to unite world political factions, a la the sentiment expressed in the time of the novel by Douglas MacArthur and much later by Ronald Reagan. Unite the world behind a common threat from space, only here the threat includes depriving the earth of its gold. Saucer hysteria and parapolitical paranoia played out in prose contemporary to the day, without the filter of all the science-fiction excesses that came after and with some humor.