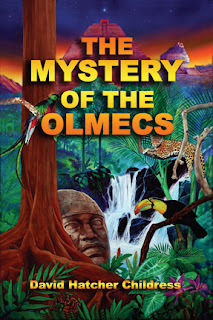 MEET THE OLMECS -- MYSTERIOUS ANCIENTS OF MEXICO!! Author David Hatcher Childress has traveled around the world several times over, but finds one of the most fascinating mysteries of history very close to home--the Olmec culture of ancient Mexico. The Olmecs were not acknowledged to have existed until an international archeological meeting in Mexico City in 1942. Now they are slowly being recognized as the mother culture of Mesoamerica having developed metallurgy, writing and the calendar long before the Maya. The statuary left behind by these enigmatic people very clearly depict features that seem to indicate residents of the Land of Olman came from Africa, Asia and Europe. Was the narrow isthmus of southern Mexico an important part of a trade route that spanned both the Atlantic and Pacific Oceans? Examine the evidence in this fascinating book by one of the most interesting historians around. You might learn more than you wanted to know about these strange people who populated the old New World! -- JOURNEY TO THE FASCINATING WORLD OF OLMAN!