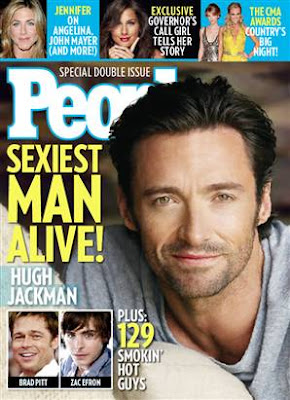 All this talk of economic collapse is exhausting. Here's something to cheer up your day...

People.com
G’day! Hugh Jackman is new Sexiest Man Alive
A romantic in a hard body, the Aussie star leaves women saying ‘Oh my’
People.com
Wed., Nov. 19, 2008
He's a triple threat: a star who can sing, dance and wield a weapon.

At 6-foot-2, all scruff and biceps, Hugh Jackman looms large in the epic “Australia,” which he says kept him “dirty 95 percent of the time” and left people stammering, “Oh ... my ... God,” according to costar Nicole Kidman, who adds, "Women's jaws drop when Hugh walks into a room."

Jackman's wife of 12 years, Deborra-Lee Furness, calls his perfect form “the Body of Doom — but I like what's inside”: a romantic who sings ballads at home and makes pancakes for Oscar, 8, and Ava, 3. A hard body with a soft center — 2008's Sexiest Man Alive sat down with PEOPLE to reveal most of his secrets.

“You turned 40 Oct. 12 and now you're the Sexiest Man Alive. What was your wife's response?”

God bless her, she said, “I could've told them that years ago!” And then she said, “Obviously, Brad wasn't available this year.” And I said, “That was a joke, right?”

“Your marriage is a success story.”

In my early 20s, I didn't have a regular girlfriend. I was single and really happy about it. And then when I was 26, I met Deb on (the Australian TV show) “Correlli.” She was my leading lady. It was just undeniable. I started planning to propose to her at about three months. We are happy. Deb and my kids have been the best things that have ever happened to me, without a doubt.

“How do you keep the passion alive?”

It's easy with my wife. She loves the idea of me coming home in costume because it makes her feel like she's having an affair in a good way. When we met, I was cast as a prisoner with tattoos and she'd say, “Don't take your tattoos off tonight!” and I'd be like, “All right!” But what works best with her is the stockbroker look. She also says, “Do your sexy dance for me,” (an '80s-like, hip-swiveling number) and that works for me.

“Are you self-conscious about any body part?”

When I was younger, I had chicken legs. My nickname was Sticks.

My smile. Lately my pecs. I'm being honest!

I didn't wear anything until my daughter was born and we had a night nanny because I was working. I walked out stark naked, and she was reading a book. Now I like boxer briefs.

It is an amusing piece acheter levitra en ligne Yes, quite