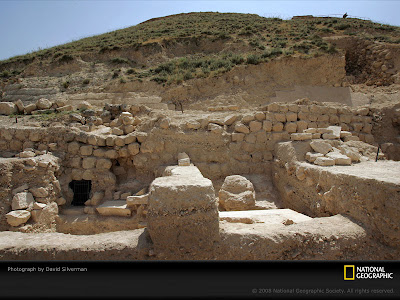 Though he died more than 2,000 years ago, the final resting place of Herod the Great, King of Judaea, should have been relatively easy to find. Most experts had narrowed the location of his tomb to Herodium, a grand complex designed by the king on a man-made hill south of Jerusalem. A biography written about Herod less than a hundred years after his death even gave fairly specific details about where in Herodium the king was interred.

And yet decades of search came to naught—until recently.

Herod was born in 73 B.C. to an influential family in the Mediterranean city of Ashqelon in Judaea. Edified by his father, Antipater, who had gained power by conciliating the Romans, Herod rose quickly to political prominence. When rivals murdered his father and the Parthians invaded Judaea in 40 B.C., Herod fled to Rome, where the Senate, impressed by his allegiance, named him King of Judaea.

Herod returned with a Roman army and captured Jerusalem in 37 B.C. Rome repeatedly expanded Herod's territory and wealth, which he used to undertake ambitious building projects, including the Herodium and his famed Temple on Jerusalem's Temple Mount. But though his closeness with Rome led to stability and prosperity in the kingdom, many of his subjects regarded his relationship with Judaea's overlords as a betrayal.

Herod's 33-year rule was marked by his political, military, and architectural genius on one hand and by increasing paranoia and extraordinary cruelty on the other. His old age was marred by uprisings in the kingdom, intrigue within his family (Herod had ten wives and more than a dozen children), and poor physical and mental health.

It was near the end of his life that Herod allegedly ordered his most infamous act: the killing of all male infants in Bethlehem. His goal was the death of the baby Jesus, whom prophets said would become King of the Jews.

Herod died in 4 B.C. in Jericho, succumbing to a gruesome, mysterious illness. An enormous funeral procession carried his body on a golden bier to the edge of the Judaean desert, where an elaborate resting place in his beloved Herodium awaited him.

'It Is Something Very Special'

When Hebrew University Professor Ehud Netzer and his colleagues began excavating at the site in 1972, their aim was not to locate Herod's tomb. But over time, Netzer's focus changed and finding the king's burial site became his main focus.

Early accounts of Herod's funeral led scholars to believe the tomb would be found at the base of Herodium, but decades of searching the lower complex turned up nothing. In 2006, Netzer suggested the team examine a seemingly out-of-place section of wall halfway up the hill.

About a year later, on April 27, 2007, diggers hit upon a slab of high-quality, highly ornamented pink limestone. Further excavation revealed a remarkably ornate sarcophagus, one fit only for a king.

"It's a sarcophagus we don't just see anywhere," Netzer said. "It is something very special."

Herod's elusive tomb had been found.

The remains of a huge staircase leading up to the burial site have been uncovered, as well as an enormous area once thought to be a hippodrome but now known to be a staging area for Herod's funeral procession. Netzer's team thinks a monument up to 80 feet (24 meters) tall may have marked the king's tomb.

Most of the burial site is in ruins, probably deliberately damaged by Jewish rebels, who loathed the Roman-appointed Herod and holed up in Herodium during a revolt against the Roman Empire in the late 60s A.D. The team found no bones in the tomb, and it's highly unlikely Herod's remains will ever be found.

Today, Herodium is protected by the Israel Nature and National Parks Protection Authority, and Netzer's work at the site continues.

"We need to find more artifacts in order to fill in the pieces of the puzzle," he said.
Posted by Robalini at Monday, November 17, 2008

Email ThisBlogThis!Share to TwitterShare to FacebookShare to Pinterest
Labels: Jerusalem